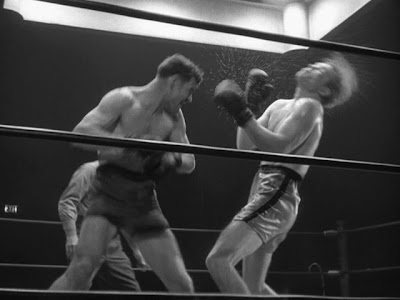 Boxing movies have become so ubiquitous that I have a theory that the vast majority of people easily watch more boxing movies than they do actual boxing matches and I don’t think it’s a stretch to say that at all. From Rocky (1976) to Raging Bull (1980) to Girl Fight (2000)to Cinderella Man (2005)  and beyond, Hollywood seems to release a boxing movie every other year of so, with mixed results. 2010's The Fighter came to great acclaim in some circles, although I didn’t care for it nearly as much as others did. I liked some of the performances, but I found the actual boxing scenes to be lacking a visceral quality and included an annoying commentary from Jim Lampley. At the other end of the spectrum, is Robert Wise’s taut and brutal masterpiece The Set-Up, which is not only a brilliant boxing film but a first-rate film noir, hovering precisely between the genres and ultimately transcending them both. 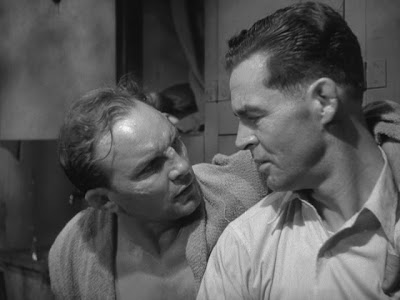 Robert Ryan, in perhaps the greatest performance of his career, stars as Stoker Thompson, a nearly washed-up boxer, who’s been hovering around mediocrity for what appears to be his entire career. He has always been hoping for that big break but is nearing the end of his career, both through his own age but also through the pressure of his wife Julie (Audrey Totter) who doesn’t want him to be turned into a vegetable. In nearly real-time, the film plays out with Stoker arriving at the arena, waiting his turn in the locker room with the other boxers in his troupe as he prepares for his match with a much younger boxer named Tiger Nelson. What Stoker doesn’t know is that his manager has struck a deal with Tiger’s manager for him to take a dive that night. 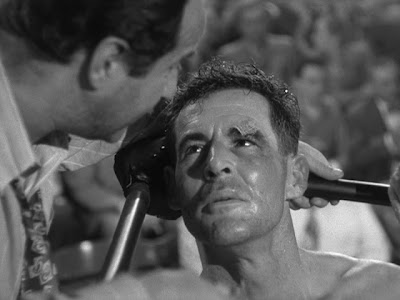 As a pure boxing film, The Set-Up ranks up there with the best of them. Stylistically, the boxing match that makes up the centerpiece of the film is filmed in real-time, with entire rounds played out before us. This fight is infused with a heavy dose of realism. Many of the camera vantages are from the perspective of the audience. I also love the choreography of the boxing match itself. We realise that these boxers are not world beaters; they are tough guys making the circuit and their boxing reflects this. Thus, it feels brutal, desperate and utterly devoid of trumped-up heroism. Boxing here comes across as an ugly carnival show, and adding to this environment are quick asides to certain sadistic audience members as they encourage the boxers to kill each other. One other plus to this scene is that there is no side commentary from a broadcaster to the match. We’re smart enough to know what’s happening in the match and don’t need a "Jim Lampley" telling us what we already know. I can think of very few other boxing scenes in any other movie that are portrayed better than the one in The Set-Up. 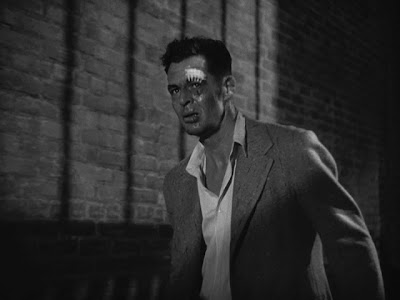 What elevates the film is the moral complexity brought about from the fact that Stoker is not told of this deal to take the dive, providing the film with the existential crises that is so prevalent in film noir. It’s so suspenseful for the audience to know more than the Stoker character knows in this plot. As Stoker continues to perform better as the match goes on, there comes a point where Stoker knows more than we do, switching the suspense and leaving the audience in the dark. Film noir elements come to the foreground especially in the last 15 minutes of the film following the boxing match and it’s not fair for me to give certain key plot points away. Let’s just say that the brutal boxing match just completed is nothing compared to what Stoker faces once the match is over. Of course in film noir, shadows and mise-en-scene play a huge role in setting up the psychological fear facing the protagonist. There’s a great scene as Stoker wanders around the darkened and empty arena after the match is over. He disappears down a darkened corridor and returns, his face bathed in harsh white light while everything is shadow around him. Needless to say, I love everything about this film from its quick pacing, to great performances, cinematography, and boxing sequence. This is one of my favorite film noirs and favorite sports movies.
Posted by Jon at 7:01 AM

i'm definitely going to have to try this one out. i dont think ive ever heard of it before now.

It's a tough and impressive little film. Short at 70-some minutes, but it packs a wallop. I came across it during the Wonders in the Dark Film Noir countdown and am making a point of finding some of those I hadn't seen. You should definitely see it if you like Film Noir or Boxing Movies or just great movies in general.

Magnificent review Jon of a seminal noir and sports film. You peel off the gauze admirably here.


When the contributions of Robert Wise to the cinematic landscape are assessed, he is of course celebrated as the co-director of WEST SIDE STORY, as the helmer of one of the most beloved films, THE SOUND OF MUSIC, not to mention as a cutter for Orson Welles. His work for Val Lewton and in film noir is sometimes overlooked, but THE SET-UP makes fair claim to be his best-directed film. As of late I am thinking ODDS AGAINST TOMORROW gives it a run in this sense.
I'd suggest that THE SET-UP is the HIGH NOON of film noirs, as like Zinnemann's film the running time corresponds with real time. Indeed, it's a brick, trenchant and riveting film that is authentic, stark and uncompromising. Fans of RAGING BULL will rightly protest, but this may well be the great boxing film ever in a competitive genre that also includes CHAMPION, BODY AND SOUL, CITY OF CONQUEST, THE HARDER THEY FALL and BATTLING BUTLER. Let's noy even broach
ROCKY and CINDERELLA MAN. Ha!

The personification of fight fans here is telling as one is more sadistic than the next, and I guess it's fair game to say that in many ways the film is a predessesor to John Huston's terrific FAT CITY years later. The seedy backrounds, which are set exclusively at night are perfectly realized by cinematographer Milton Krasner, and there has rarely been such a cynical, if brutally honest depiction of the boxing world.

Thanks for the comments Sam. I agree with you about the High Noon comparison. The economy of story here and the real-time as it plays out is very much the same. Robert Wise is quite the director, when you start to discuss the scope of the work that he did. I just picked up Odds Against Tomorrow, so will be seeing that this week. I also like your mention of the cynical, brutally honest depiction of the boxing world. You hit the nail there. I like Raging Bull for other things besides the boxing, and I think that makes The Set-Up rise a little higher for me in terms of the actual boxing that takes place, and the examination of the boxing world. Thanks Sam!