On the Town (1949) - Directed by Gene Kelly and Stanley Donen 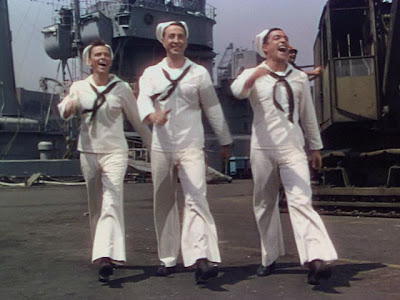 Gene Kelly and Stanley Donen’s first collaboration as directors yielded one of their finest creations. Although they would go on to helm perhaps the greatest of all musicals, Singin’ in the Rain (1952), we shouldn't overlook On the Town. Neither had directed a film before, but they took on an established hit in the Broadway smash of the same name that ran during the 1940’s. On the Town came featuring some wonderful songs by Leonard Bernstein, some of which were dropped in favor of new songs by Roger Edens. It is a film that strikes you first of all because it features some on-location shooting in NYC in color, which gives the film some real pizzaz and lifeblood. But there is also just a cavalcade of great song and dance sequences that elevate the film to the upper echelon of movie musicals. 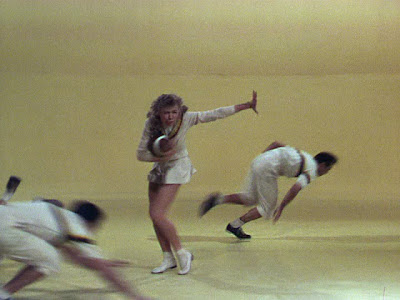 Gabey (Gene Kelly), Chip (Frank Sinatra) and Ozzie (Jules Munshin) are three sailors who have 24-hours of shore leave in NYC. They of course want to see the sights of but mostly want to find some ladies to have some fun with. Gabey falls in love with Miss Turnstiles (Vera-Ellen), who is the featured “subway pin-up” of July and spends much of the film trying to track her down. Chip finds a cabbie, named Brunhilde played by Betty Garrett and Ozzie meets up with Claire, an "Anthropologist" played by Ann Miller. All of them meet at the top of the to begin their night on the town. It’s interesting to note here that sex plays an interesting part in the film. Sure, we assume that the sailors want to hook up with a lady for the night, but what’s amazing is that the women in the film are the aggressors, especially Betty Garrett and her continued come-ons toward Frank Sinatra. She repeatedly mentions “come up to my place” in a song routine with him. Even Ann Miller’s Claire is quite the animal as she seduces Munshin and explains to him that she had taken up anthropology to get over her obsession for men. Well apparently it didn’t work because she shimmies and shakes her way to his heart in her showcase tap routine. 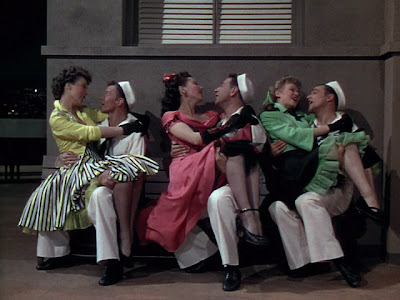 There are some outstanding song-and-dance numbers in the film and of course the opening “, ” number is probably the most memorable song as the fellas sing their way across with several great iconic images of the city. What I was most impressed with though were the terrifically choreographed dance sequences replete throughout the film. As mentioned, Ann Miller gives a powerful tap dancing sequence in the museum in front of the dinosaur skeleton during “Prehistoric Man”. Vera-Ellen gets a great pseudo-dancing setpiece during the “Miss Turnstiles Ballet” as we’re introduced to her interests from ballet, to painting to football and track. All the while she is changing outfits and adjusting the dance to mimic the movements of the particular topics. I love the finale of this scene where she boxes, kicks and knocks out a bunch of guys. This exuberant scene is a great blending of dance and storytelling. Vera-Ellen and Gene Kelly also share two wonderful scenes together. One is the delightful dance during the “When You Walk Down Main Street with Me” scene where their courtship is played out on the dance floor and the other is the lovely shadow-enhanced dancing scene during the “A Day in New York” extended dance in three parts near the end of the film. Surrealist and notably artificial aspects of this scene, involving light and depth of field heighten the emotions of the dance and make the scene more tragic. It’s probably the film’s most beautiful moment. 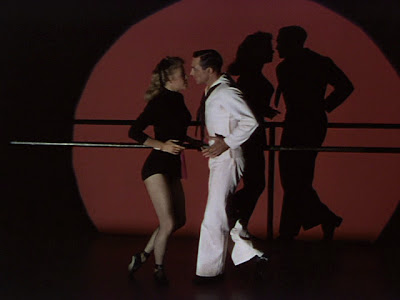 Although it’s clearly not on the same level as Singin’ in the Rain (But what is?), there is a remarkable level of consistent excellence throughout the film. I think the acting and storyline feel like a good match too. It’s not too serious. Also, the running time of 98 minutes feels right. Kelly and Donen’s musicals were never too long, which is appropriate considering the plots of the films. With the and Hammerstein adaptation films, the running times of many musicals began to balloon, which began a tradition that would last into the 1970’s of creating epic musicals, some which I like (The Sound of Music) and some which I don't (South Pacific). Kelly and Donnen’s MGM gems are musicals for people who like their musicals fun, colorful and quick paced.  On the Town maximizes all of these to great effect.
Posted by Jon at 6:00 AM

This was one musical that didn't blow me away on ititial viewing, and it narrowly missed making my own countdown ballot. But in seeing it again on my plasma I saw it's virtues, including the location work, the song "New York New York" and the infectious energy. I agree it's nowhere in a league with SINGIN IN THE RAIN, though as you rightly note the color, the style and the pacing are all impressively rendered. This has always been a popular musical, and it's no wonder it finished in the Top 20 of the countdown.

As always Jon, excellent work in framing ON THE TOWN's virtues and wide appeal.

I had actually seen it once before and was unimpressed for some reason. Decided to watch again and found it quite amazing. I too would place it in my own top twenty. There's a lot here to enjoy.

Great,in my opinion this is the third best musical after "Singin' in the rain" and "The band wagon".