The Red Shoes (1948) - Directed by Michael Powell and Emeric Pressburger 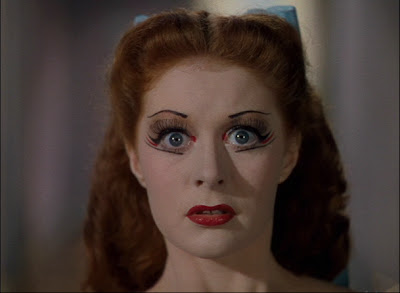 If The Red Shoes isn’t the greatest film ever about artistic obsession, I’m not sure what is. Michael Powell and Emeric Pressburger’s masterful tour-de-force is also arguably their best film, although I have a very difficult time choosing between this one and Black Narcissus (1947), among several other films in their canon. Their films have a way of completely enwrapping you in cinematic intensity, be it through charm, romance, inspiration, subversion, suspense, horror, fear. It’s this intensity of emotion that gives The Red Shoes so much feeling and flamboyance, while maintaining something resembling civility and restraint when needed, keeping this film from being wildly erratic. Instead, it is as cinematically urgent as any film in history. 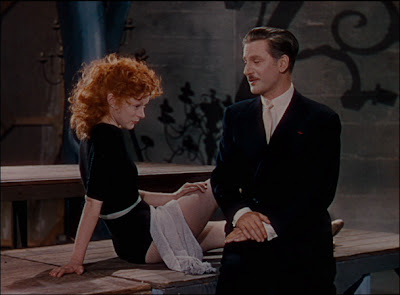 Based on Hans Christian Anderson’s fable, The Red Shoes concerns the convergence of three key characters. One is Boris Lermontov (Anton Walbrook), director of a ballet company. He’s intense and filled with a kind of demonic obsession to find both a perfection in a ballet production, and also to find the prima ballerina to help achieve such perfection. Another is Julian Craster (Marius Goring), a talented but uncredited composer who is hired by Boris after convincing him that his work has been pilfered from his current composer. The third is the dancer, Victoria Page (Moira Shearer). She remains fairly unnoticed by Boris until he sees her perform in a small, local production of where he notices her drive and intensity. He soon takes her under his wing and convinces her to be the lead in a new ballet he’s planning, called The Red Shoes, being composed by Julian. Soon, the three of them enter into a sort of love triangle. Vicky falls in love her composer, while Boris maintains that she should be devoted to her work and art, and thus to him. Vicky is torn, literally, between love and art. 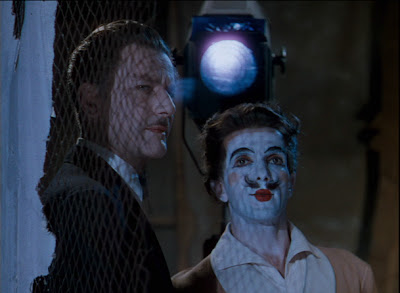 Relaying the plot is rather bland when compared to the virtuosity with which the film is presented. I just watched the Blu-Ray of this film, and was again reminded that, yes, The Red Shoes is one of the 5 most beautiful color films ever photographed. Jack Cardiff’s cinematography simply takes my breath away, continually. Powell and Pressburger give the film a brilliant emphasis toward dance, providing atmosphere that feels as authentic as any, regarding the backstage banter and practice sessions. I know many people don’t really think of this film as a musical. I do, if for nothing else than the astounding 15 minute “Red Shoes Ballet” sequence that is not only the greatest dance sequence I’ve ever seen on film, but also one of the truly virtuosic cinematic experiences that one will ever see. This ballet scene is presented as a nearly fluid sequence. It is probably the first and greatest example of dance (0r song) choreographed over a lengthy run time (and influenced Gene Kelly into creating an extended ballet in An American in Paris (1951)). At the beginning of the ballet, the perspective is presented to us as if we’re in the audience and the dancers appear onstage before us where Vicky Page dances and is beguiled by a pair of red ballet shoes in the shop of a local cobbler/magician. Little does she know that these shoes have a mind of their own. Soon, we notice that the scene leaves the realism of a theatre presentation, and enters a cinematic universe where it is free to roam and breathe. We see a mirror image of Vicky in a window, the shoes magically enwrap her feet, she floats through a dreamy landscape, there’s a beautiful slow-motion sequence, she dances with a newspaper and on and on the scene goes with flamboyant propulsion and emotion. Not only is the music, choreography and cinematography in this scene unparalleled, it also contains the essential component of the psyche of the dancer. Vicky’s paranoia and passion are reflected throughout the scene as she hallucinates visions of Julian and Boris, appearing at will. We realize that this ballet is paralleling and presaging personal moments from her life. 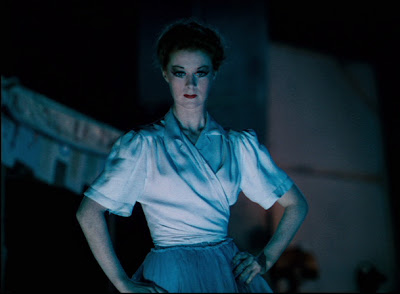 Moira Shearer’s presence is best felt during her dancing performances or the extreme emotional close-ups that frames so well. But, it’s Anton Wallbrook’s performance as Boris that really stands out, not only as the best performance in the film, but one of the all-time great performances in any film. His possessiveness and slightly cool way of telling someone off gives him a simultaneously creepy and gentile quality. One of his best moments comes as he gives an impassioned and measured speech to the theatre audience at the end of the film, following an intense tragedy. His cadence and projection during this moment are truly memorable. Boris’ insistence upon pure devotion to art which is unfettered and uncluttered by human love is a maniacal obsession and domination which he tries to enact upon Vicky. At first, she loves art and shuns love, ensconcing herself as his artistic lover. When she trades in her ballet shoes for the sake of Julian’s love, she betrays Boris, not just artistically, but emotionally and physically as well. Of course, Boris’ control over Vicky, parallels the red shoes' control over the dancer in the ballet in a perfect symmetry of terror. Powell and Pressburger’s The Red Shoes is about as essential as they get and is unequaled in so many ways. It demands to be seen by anyone who loves cinema, dance or art of any kind.
I end this essay with a visual tribute to The Red Shoes Ballet. 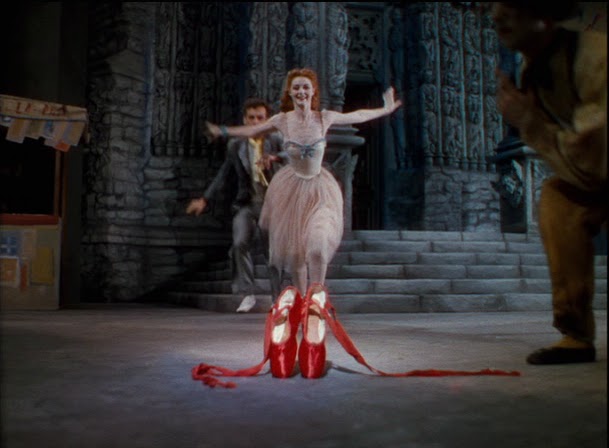 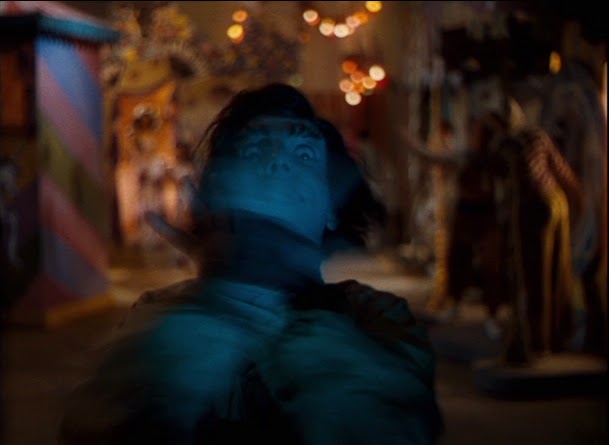 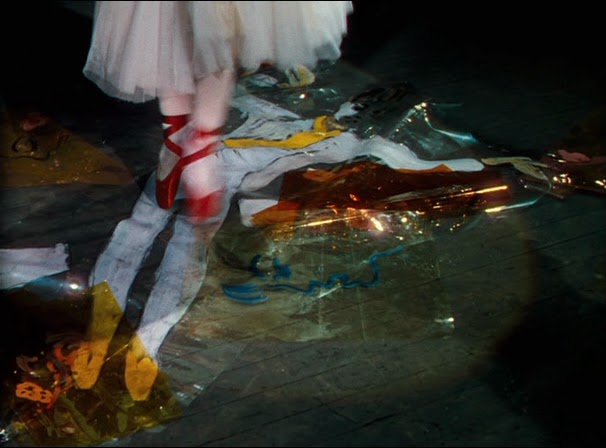 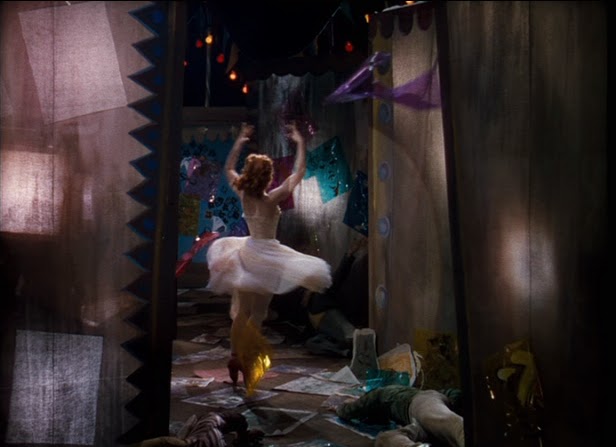 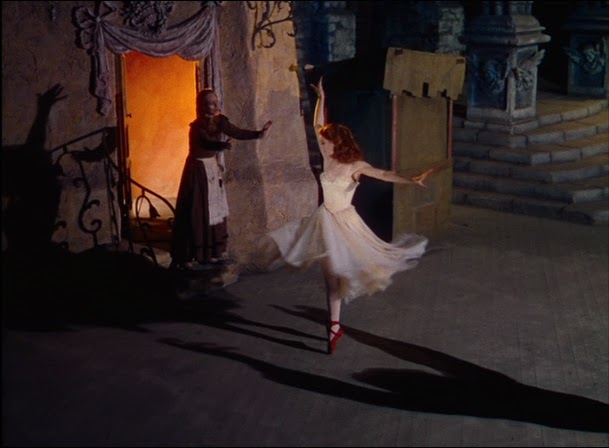 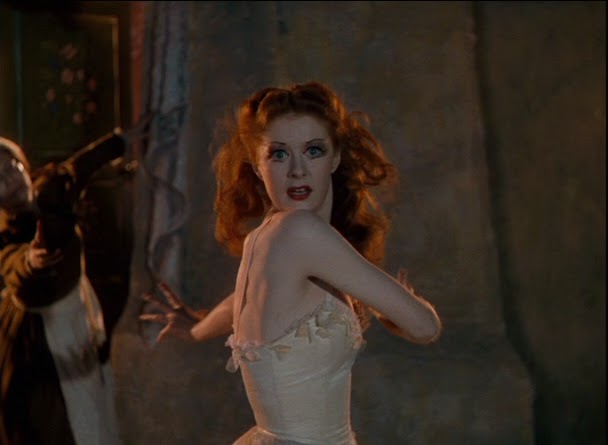 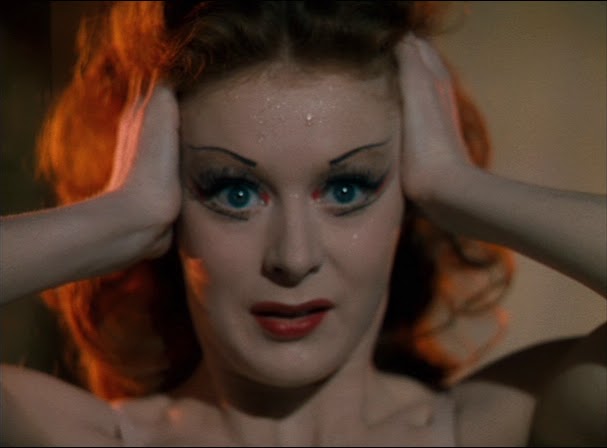 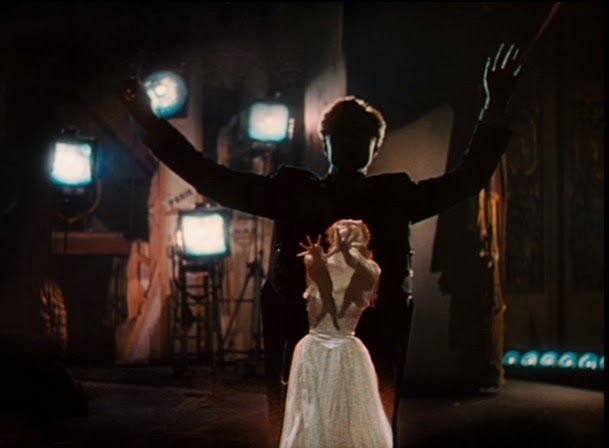 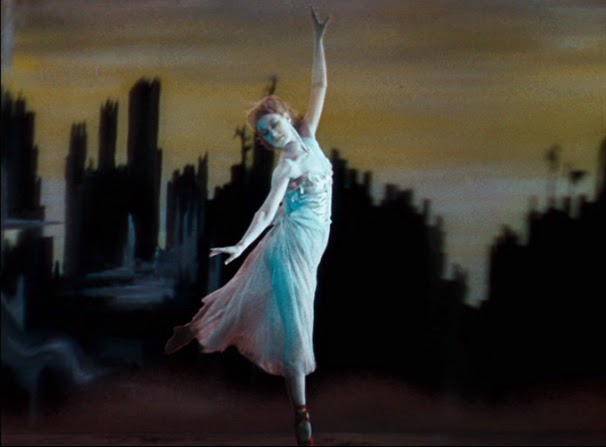 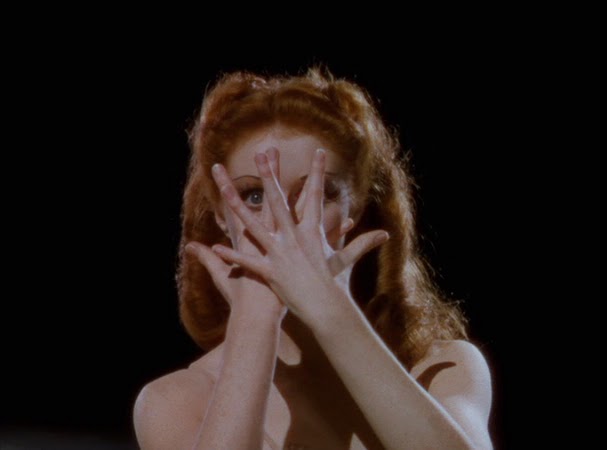 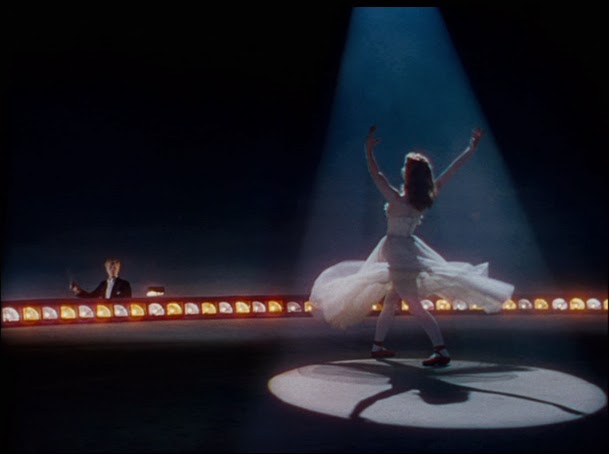 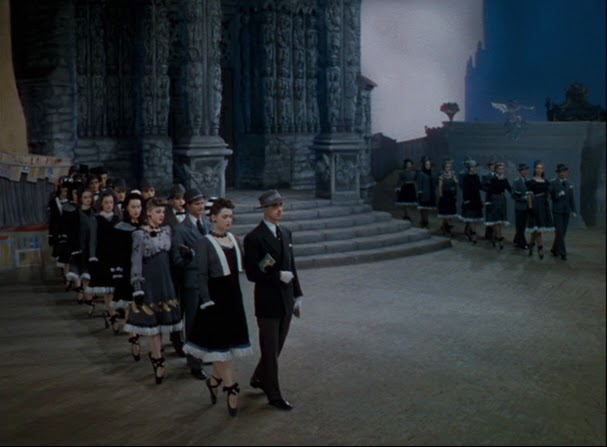 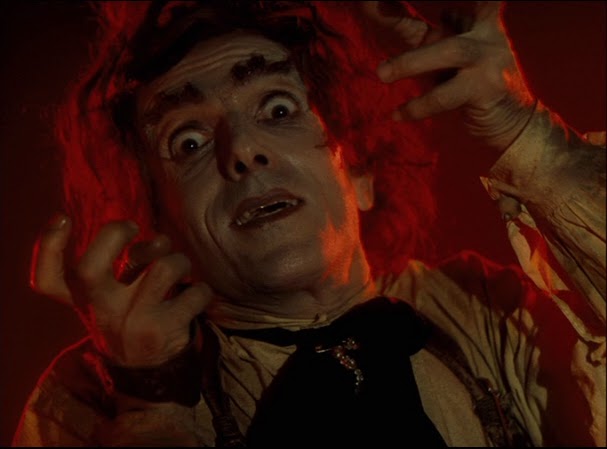 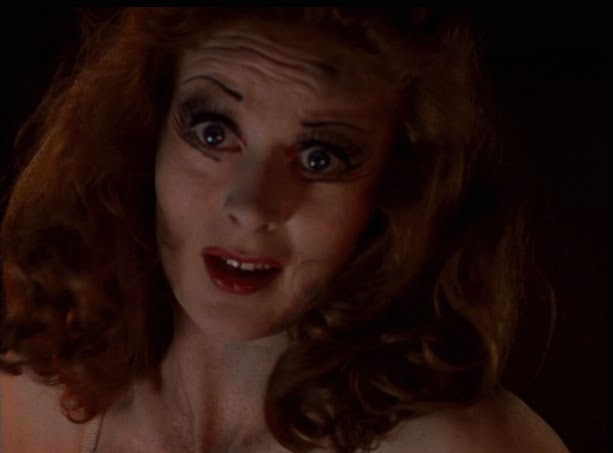 "...it’s Anton Wallbrook’s performance as Boris that really stands out, not only as the best performance in the film, but one of the all-time great performances in any film."

Yup. And I'm often tempted to drop the "one of." Beautiful screencaps, by the way.

Oh wow those are very beautiful .Your excitement is clearly justified! I want to tell youtrue religion shorts is my favorite and hope you can come in and see.

I think this is also one of Scorsese's favorite color films.Did you watch the documentary about Jack Cardiff?

I prefer this to Black Narcissus because of the climax ballet scene and the story of the internal struggle between career and love of a woman.The screencaps are gorgeous,I believe they are from the Criterion Blu-ray.

"If The Red Shoes isn’t the greatest film ever about artistic obsession, I’m not sure what is."

Well Jon, there are some BLACK SWAN fans out there who would make some claim for that statement, but be rest assured I'm not one of them! Ha! What you say here is dea-on, and your artistic appraisal is magnificent, as is your screen cap display. In the last two years I am inclined to favor either THE LIFE AND DEATH OF COLONEL BLIMP or BLACK NARCISSUS as Powell and Pressberger's absolute masterpiece, but THE RED SHOES definitely pushes close. Yes, Jack Cardiff's color cinematography is utterly ravishing, and ranls among the most gorgeous ever produced. This is a wonderful appreciation of one of the cinema's supreme classics. Great work Jon!

@ Samuel- Thanks for the comment! I had seen this a few times before, but for some reason Walbrook stood out even moreso this time.
@ Rudy- Thanks for stopping by. It's a gorgeous film.
@ David- It IS one of Scorsese's favorites and I did see the Cardiff doc which sheds some nice light on this film and his work. Glad you enjoyed the screen caps. I don't normally include this many, but they're too beautiful not to include them.
@ Sam- Thanks as always for your support. Black Swan I like, but the genesis of it would clearly be found in The Red Shoes. I go back and forth myself on Powell and Pressburger's best work. It's generally whatever I'm watching at that minute that I consider their best. What's so remarkable is their work remains so fresh and vital. Their works seem hardly to age at all. There's such a timeless modernity to the work. It's self aware, passionate stuff that never ages. At least in their best works it feels this way.

Jon, a lovely post on a great film. For several years in the forties, Powell and Pressburger created one masterpiece after another, and though I love them all, "The Red Shoes" is my favorite. I like the way you isolated the film's theme of artistic obsession and the choice Vicky has to make between love and art. I also like the way you gave credit to Anton Walbrook. I absolutely agree that his Lermontov is the dominant performance in the film and one of the great screen performances of all time.

R.D.,
Thanks for the comment! I'm glad you're such a big fan of the film. Vicky's choice is a difficult one and that choice is what drives the conflict at the end. Yes and Walbrook really stood out to me this time. It's just a fabulous performance from him, and he's one of those vastly underrated actors. He has a really good cameo in 49th Parallel and is also quite fun in Ophuls' La Ronde which I've watched recently.

Oh, I love this film so much. Just looking at the screencaps is a pretty ravishing aesthetic experience in itself. When it comes to ranking most beautiful color films ever made my list goes something like: 1. The New World. 2. The Red Shoes. and then who cares?

Hey Stephen!! Haha yeah I know what you mean. After Mallick and The Red Shoes does anything else matter? I still think Days of Heaven is Mallick's most beautifully shot film, but The New World is a better film on the whole. Glad you liked the screen shots!! There's just too many good ones not to share them!

One of my all time favourites. Thanks for highlighting some truly magical images - they really show off the film's true beauty. One of the best I've ever seen.