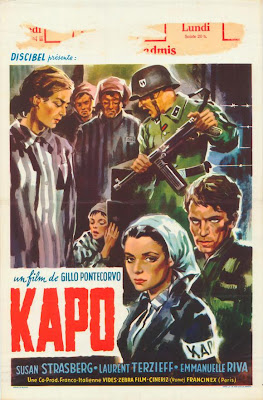 Once in a while I see a film that is deeply unsettling. In the case of Gillo Pontecorvo’s 1959 film called Kapo, I am not the first nor the last that will be troubled by it. In fact, in order to be respectful for the subject matter, I refrain from posting any screenshots from the film. I didn't feel right about searching through the film for artistic screen shots considering the subject matter. Kapo is about the Holocaust and is one of the first fictional films to deal with the subject in its entirety. There were a few films prior to it that dealt with parts of it, such as 1948’s The Search. In 1955, Alain Resnais made the documentary, Night and Fog which chillingly detailed the lasting horror of the event. In some circles, Night and Fog is the final and last word on the subject. In 1959, only 14 years after the Holocaust, two films would emerge in the same year. One was The Diary of Anne Frank, of course based on Anne Frank: The Diary of a Young Girl and also on the dramatic stage play that appeared on Broadway in 1955. Pontecorvo’s film was an original work, with a screenplay written by Pontecorvo, who was Jewish, and Franco Solinas. In doing some research after watching the film, it turns out that Kapo is on the short list of the most divisive and troubling films in the history of cinema, not just for what's in it, but for what it started.
Pontecorvo brought his love of Italian neo-realism, and Rossellini in particular to Kapo, a film that concerns 14 year-old Edith (played by Susan Strasberg fresh from her stint on Broadway as Anne Frank), who is transported with her Jewish family from Paris to Auschwitz. Through some coincidences and unique occurrences, she obtains an alternate identity there and takes the name and number of a recently dead prisoner. She is now Nichole, a non-Jew with a criminal past. She gets sent to a work camp because of these events. While there, she does everything she can to stay alive, as a character suggests to her, but begins to break down morally and lose her dignity, as others warn her not to. Kapo concerns a very unique type of story that actually occurred throughout the Nazi concentration and work camps and one which I was never aware of until seeing the film. A Kapo was an inmate who was given a job by the SS to be barrack supervisor or warden and who dished out punishment to their fellow prisoners to keep them in line. A Kapo was treated better than most prisoners and had more access to food and other items of need. There are numerous cases following WWII in which Kapos were indeed charged with war crimes, much like the Nazis. In the film, Nichole, after selling her body and soul to achieve warmth and food, is offered the job of Kapo. She takes it.
What the film attempted to do, tell a fictional story replete with melodrama and martyrdom, was considered objectful in the worst sense. Famously, Jacques Rivette of The Cahiers du Cinema renounced the film wholeheartedly in an essay based on one specific scene. There’s a scene with a brief tracking shot where a woman named Terese (played brilliantly by Emmanuelle Riva) throws herself on the electrified barbed wire. Rivette wrote: "Look however in Kapo, the shot where Riva commits suicide by throwing herself on electric barbwire: the man who decides at this moment to make a forward tracking shot to reframe the dead body - carefully positioning the raised hand in the corner of the final framing - this man is worthy of the most profound contempt".

Famously French Critic Serge Daney was so in agreement with this paragraph at age 17 that he decided to become a film critic. Later in life, he wrote a fascinating essay on Rivette, Kapo (which he never even saw!!!) among other things regarding the limitations that art should take. He also highlights a scene in the well-known Rossellini film, , Open City (1945). There’s a famous scene where Ana Magnani is gunned down in the street and the camera is at a particular angle where you can see her garters and underskirt as she lies there dead. Daney says regarding this scene: “(Rossellini) was hitting “below the belt”, but in such a new way that it would take years to understand towards which abyss it was taking us.” Both Rivette and Daney of course are referring to the "moral irresponsibility" of artistically framing up something that could or should be considered un-filmable, unless one wants to be considered sadistic or voyeuristic. Only recently, Quentin Tarantino was taken to task for his Inglorious Basterds (2009) both panned and praised, which contained highly objectionable material to some, regarding revenge related to Nazi atrocities. I think Kapo works on a similar but far more benign type of level, as I was less troubled with the dramatization and artistic sensibilities of the subject matter, and more over the morally troublesome portrayal of a Jew as the main antogonist of the film. Other Nazis in the film are at worst, faceless and at best, docile. Nichole is by far the perpetuity of evil in the way that she has turned into an animal, one which is capable of selling out her fellow prisoners in order to live. I struggled with this moral conundrum during the film and still do. This film stares you in the face and presents the viewer with a near unimaginable horror - that of the persecuted becoming the persecutor. I cannot deny that the film contains both potential to deeply move and infuriate. It’s both a masterpiece and a failed examination depending on your view. I don’t think it’s possible though to not be moved or troubled by it. It will definitely bring out a reaction to everyone who sees it. Pontecorvo would take the criticism from this film into his next film, The Battle of Algiers (1966), which is rightly praised for its hard-line, unsentimental look at the Algerian War.
I realize though, that I’ve spent an entire essay talking about a film that I cannot wholly recommend regarding its virtues. What I can say for sure, is that it is a landmark kind of film, one which film-viewers must see to determine what side of the argument they fall on. Is this melodramatic and objectionable exploitation or is it a vital and important work with commentary on one of the darkest periods mankind has ever known? For Pontecorvo, although he fails at times to get through the story without contrivances, he succeeds in telling an effective and engaging story that did occur in forms just like it. Morally troubling as it may be, Kapos existed. Their stories of the persecuted becoming the persecutors are some of the most morally difficult that I can think of. Perhaps this film’s greatest legacy then is telling a story that no one else has dared to tell ever since, for better or worse. I can't even imagine if someone tried to make this film today what untold numbers of people would put forth an outcry. I'm not sure any film on the Holocaust will ever be made without severe critiquing though. For me, the film’s unique place in history, its divisiveness and important centrality in the determination of whether art should bear a responsibility, make it essential.
Posted by Jon at 6:00 AM

I've always been curious about this one, if only for that notorious tracking shot! I believe Criterion released it not too long ago, I'll have ti finally get to it one of these days. Nice, thoughtful piece here, Jon.

Hey Drew I really appreciate your comment. I did check out the Criterion release which was part of their essential art house collection. I was quite surprised by the film on many levels. Like I said it's not perfect but it's a heck of a film.

I have come close to purchasing this film at Barnes and Noble a couple of times and have always held back, not knowing much about it. Your review here though makes me want to finalize those attempts and make that purchase. While I was disturbed by Tarantino's "Inglorious Basterds" I always feel it's an artists' right to project his vision and if people want to see it or not, praise it or damn it, well that is their right.

Strasberg was a very good actress who made some interesting films early in her career (Picnic, Stage Struck and Scream of Fear) before falling into TV hell, and cheap low budget films of varying quality.

Thanks a ton for stopping by and commenting. I do encourage you to see it for sure. Like I mentioned, I think everyone's reaction to it may be different, but there is certainly a bunch to take in as you see the film. I do understand your opinion about the artist having a right to project a vision. I was surprised by how much Jacques Rivette despised the film as I would think he would be more open. I haven't seen too many films with Strasberg, but her work in this film very fascinating to watch. Hope you get a chance to see it.

"This film stares you in the face and presents the viewer with a near unimaginable horror - that of the persecuted becoming the persecutor. I cannot deny that the film contains both potential to deeply move and infuriate."


I know this film well, and am aware of the critical divisiveness that you so thoroughly relate here in this splendid essay on an uneven but important film. Rivette's dismissal based on a single scene objection seems unfair, if unconvincing, but the film has divided others too despite some exceptional moments and an electrifying performance from Emmanuel Riva. Few realize that Pontecorvo was Jewish, and that there was an added conviction in the subject matter. To answer your question, yes it is melodramatic, but it's still vital. Of course it's nowhere in a class with the director's great masterpiece THE BATTLE OF ALGIERS, but that's really not the point. The film deals with some startling assertions and Pontecorvo doesn't shy away from painting his picture, however bleak.

I tried to place the above comment for three days, but blogger kept eating the comment every time I clicked on "post." John Greco informed me yesterday evening that it has to do with internet explorer. He advised using mozilla, and lo and behold it worked. This is the first instance I've had at FILMS WORTH WATCHING having trouble leaving a comment.

I thank John Greco again for his help.

Thank you for your persistence to comment despite the issues. Hopefully this gets cleared up. As always your comments are right on the money and I agree, Emmanuel Riva steals the show in this difficult film and despite its shortcomings, remains powerful nonetheless.