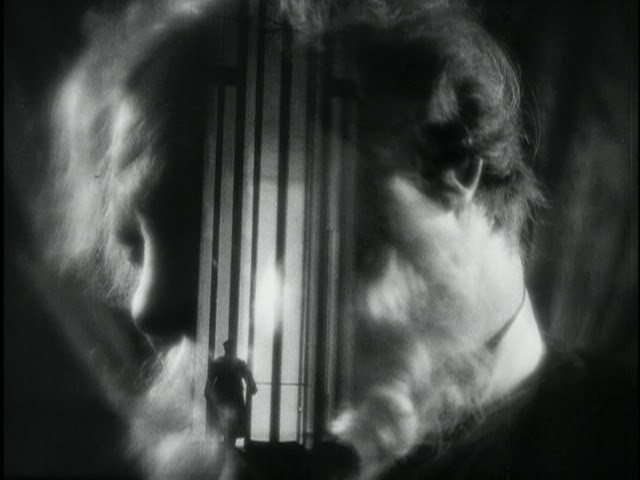 Murnau’s jaw-dropping masterpiece The Last Laugh is a testament to visual ingenuity, to storytelling, and to pure film mastery. If there is anyone out there who doesn’t believe that silent film contained masterful visual techniques then I would probably show them this one. Although Murnau left the world early at the age of 42, the body of work he put together in the silent film era is as formidable as any other silent film director. He arguably made the greatest silent film of all-time, (1927). It’s not that I disagree with that statement, it’s just that I’m not even sure that is Murnau’s best film! My vote just might go to The Last Laugh. 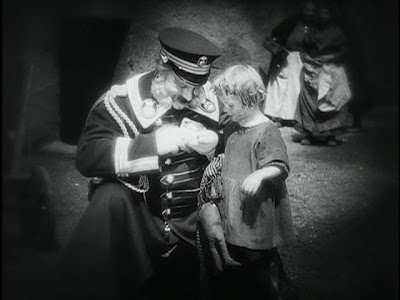 There is something so purely magical about this film. Emil Jannings plays an aging doorman at a hotel who near the beginning of the film, is demoted from his position and is forced to take the job of washroom attendant. It’s clear his boss thinks he is too old to keep the position of doorman at the hotel. Most of Murnau’s film follows Jannings as his outlook and demeanor deteriorates. It’s clear that the doorman saw his position as not just his job, but as his life-defining aspect. When his job is taken away from him, it’s as if he can barely muster the energy to continue to live. There’s a scene early in the film where a happy Jannings is walking down the street in his doorman uniform, coming across a small child and sincerely gives the child a box of licorice. This is the “before”. The “after” is Jannings stumbling home after the demotion, with the weight of the world on his hunched shoulders, wind whistling through his beard, fearful eyes turned back over his shoulder as the world is collapsing on top of him. I adore the way this film examines age and job position and how careers can dominate how we view ourselves. When a job is taken away, it has devastating effects. 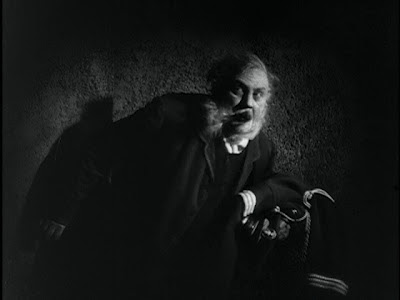 Murnau’s film is completely told without dialogue intertitles. The impact of this film thus relies completely upon the actors and the visual storytelling techniques. Murnau’s sets are created to allow us to see the action and see the interaction. Foremost is the massive swinging doorway of the hotel that looks nearly 30 feet tall not only welcoming but also intimidating all who pass through. Murnau’s tracking shots, point of view sequences and overlaid montages are simply astounding here. Jannings’ drunken hallucination sequence is garish, magical, hypnotic and inspiring all at the same time. My favorite shot in the film is the overlaid image of Jannings’ head with the massive swinging door lit up through his head. Presaging Inception (2010) by nearly 90 years, the shot of the building careening over itself is an impressively striking sequence as Jannings’ mind deteriorates. This film is a near barrage of visual brilliance. 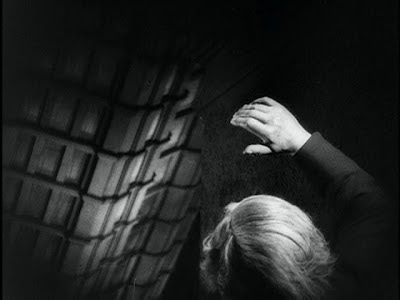 So let’s discuss Jannings, who here gives my favorite of his great performances, perhaps challenged by his work in The Last Command (1928). I prefer his work in The Last Laugh only because we get to watch him during so much more of the running time. He is tragic, comedic, sincere, loving, and utterly compelling for the entire film, carrying the weight of the film and making us feel the heavy burden he is under. I am so impressed with his work and by the fact that we don’t need to know what he’s saying. We just watch his eyes and his body and we know everything we need to. The Last Laugh is one of the absolute pinnacles of silent cinema and one of the all-time greatest examples of visual storytelling.
Posted by Jon at 7:00 PM

The Last Laugh is my second fave Murnau following Sunrise,Jennings' performance might be one of my top 10 male performance ever.

It's really interesting to watch the extras in the MOC disc,Murnau and his photographer did almost every trick possible to "deceive" our eyes,there are so many technique inventions that every filmmaker after him learned something from his films.

Thanks David for your comment. Jannings is terrific for sure and one of the all time great actors. Yep the photography here is outrageous and simply breathtaking. It's easy to see how this type of filmmaking was very influential. They had a real vision for what they wanted to do.

THE LAST LAUGH is one of the silent film landmarks, and one of a trio of Murnau films (the others being SUNRISE and NOSFERATU) that stands in the immortal ranks of world cinema. Jon, you write with authority and and an acute sense of appreciation (yes this is also my own favorite Jennings performance) and enhance the literature on this seminal work. It's a story of humiliation that predates THE BLUE ANGEL, but it's a far more disciplined work, that, like the best of silent cinema uses expressive acting and visuals to say what dialogue and intertitles could never quite replicate. The class component is of course vital in the picture, and the dazzling dream sequence shows what Murnau, Freund and Ulmer can accomplish at the height of silent film artistry mid 1920's. Jennings' performance is one of the truly unforgettable turns by an actor in film history. The well-publicized sarcasm and cynicism that resulted from studio interference properly poses the despairing denouement Murnau and Mayer had originally intended.

Sam and thank you for sharing your appreciation for this work. You're right about this film predating the humiliation on display in The Blue Angel, another one of Jannings' best performances. Also, yes the component of class structure is on display and certainly one of the reasons for its impact. I do love the dream sequence. It's a bravura cinematic moment and one of the greatest sequences of the silent film era, methinks. Yeah I think the ending is something for discussion and debate and although the tone of it does not jive that well with the rest of the film, there's still something satisfying about it. Thanks Sam for your never-ending support.