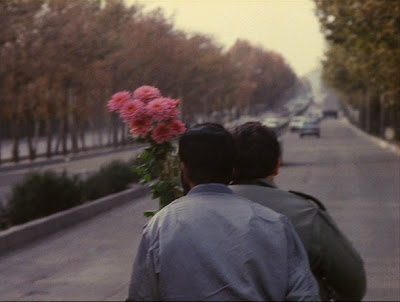 Close-Up is Iranian filmmaker Abbas Kiarostami’s great masterpiece and is a transcendent and unique film experience from beginning to end. I’m not sure if I’ve ever seen another film that works on quite the same level as this one does. Perhaps it’s because of the unique circumstances surrounding the film. Kiarostami’s subject in the film is a man named Hossein Sabzian. He was arrested in for fraudulently portraying himself to the middle-class Ahankhah family, as the real-life Iranian filmmaker Mohsen Makhmalbaf, director of such films as The Bicyclist (1987) and Gabbeh (1995). Close-Up basically documents the events of the case as well as the court-room scenes involved in the trial. What’s so fascinating is that Kiarostami actually used the real persons concerned in the case, Sabzian as well as his accusers, to portray themselves in the story. 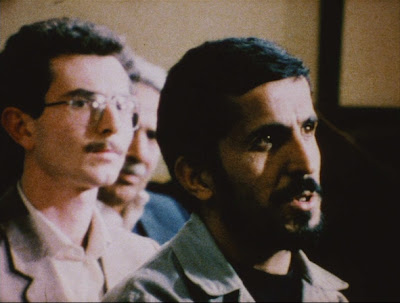 In trying to analyze the impact of this film, there are so many layers of the onion to peel back to fully grasp everything going on. In one sense, the film can be taken as a pseudo-documentary. I mean the film does depict actual events that took place in a style that could be interpreted as a documentary. One can especially look to the courtroom scenes, which are filmed in a grainy 16mm and everything has the aura of real-life, not the cinema. In fact, these scenes are so tense and lifelike that you sometimes forget that you’re watching a movie. These moments are that well portrayed. Additionally, Kiarostami himself appears in the film early on, interviewing certain key members of the case and getting the court’s permission to film the case, as well as asking the defendant if he would allow him to film the case in court. The continual presence of the boom-mike in certain scenes also lends us to intake this film as a rough-hewn documentary. Ah but it’s not that simple. 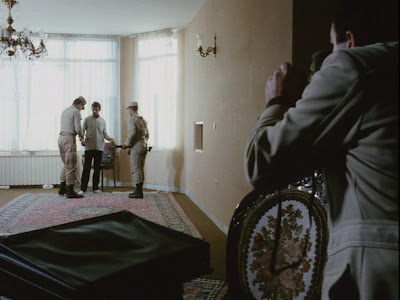 Other scenes in the film are clearly cinematic, not documentarian in their impact. In the opening prologue we’re introduced to a journalist who also has a few policemen in tow, taking a taxi cab to arrest someone. At this point in the film, of course, we have no idea of what is about to happen, but this sequence contains some brilliant overlapping dialogue and a long car ride, something that Kiarostami would employ in his later films as a sort of calling card. Another “cinematic scene” is one in which Sabzian goes through the act of introducing himself to the mother of the family on a bus. Sabzian and the woman have cinematic dialogue and the film has the polished look and feel of a “movie” as these scenes are recreated for us. Another brilliant scene done this way is the whole scene leading up to Sabzian’s arrest in the family’s home. Nearly Hitchcockian in its suspense level, we’re pulled into the game of cat-and-mouse as the family suspects that something is amiss, and we sense too that Sabzian knows his time is up. 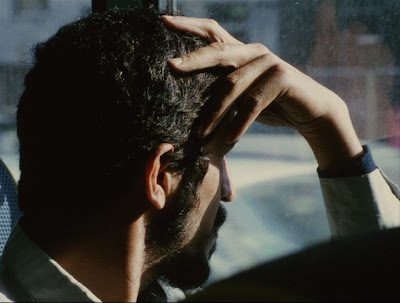 Above all of this though, the film can be called purely cinematic throughout the whole thing. We know that this film has been put together, molded, crafted carefully by a director who loves to toy with the idea of cinema that oozes with art and artifice. We are to become at once lost in the whirlwind of cinema disguised as reality. This tug-of-war between cinema and reality within the film is what gives it its power. Of course the film has much to say on the role of actors and directors. Sabzian has pretended that he is a director and in one sequence in the court, he is asked if he would be a better actor than a director and he comments that yes he would be a good actor. There’s an interesting exchange during this sequence:
Interrogator – “Aren’t you acting for the camera now? What are you doing now?”.
Sabzian – “I’m speaking of my suffering. I’m not acting. I’m speaking from the heart.”
Interrogator – “What part would you like to play?”
Sabzian – “My own”.
Interrogator – “Haven’t you already done that?”
This important sequence highlights two key reference points. The first is internal to the film, in the fact that the interrogator is referring to the fact that Sabzian’s court case is being filmed. But the other layer is the external component in that Sabzian, through pretending to be a director, won himself an acting role in his own story, which is Close-Up. It's terribly ironic, but Sabzian gives a brilliant performance as himself. I’m not sure it can be said any other way, but it’s certainly a performance and I found him to be piercingly poetic onscreen. As the capstone to the film, there’s a brilliant denouement that is heartrending in the best sense of the word, as a haunting score plays over the action that finally and absolutely brings the cinematic brilliance of Kiarostami to the fore. Kiarostami has continued to gain acclaim over the years and this film is a great foray into the examination of a fascinating artist. Close-Up is an example of a film that transcends the limitations of cinema to bring us something that is unique, infused with life and enduringly challenging. It's also one of the very best films of the 1990's.
Posted by Jon at 7:01 AM

This is surely one of this great artist's masterworks. For me it sits with A TASTE OF CHERRY and THE WIND WILL CARRY US, though several others still are most commendable. Looks like you examined all the pertinent facts that qualify this as a brilliant work--one that you aptly notes meshes cinema with reality. This is of course a film about identity and the use of the actors as themselves heightens the sense of urgency. As with most Kiarostami films, the filns begins slowly, but eventually envelops you. There is of course the deep humanism, which underlines all his work, and the coutroom sequence is amazing.

Terrific review John of an essential work of contemporary cinema by one of it's greatest artists.

Thanks Sam as always. This is just an astounding film in every way. I admit I'm not a huge fan of A Taste of Cherry, but The Wind Will Carry Us is definitely one of his best. I'm still really hoping to catch Certified Copy but haven't found a DVD of it yet. Amazingly, until the recent Criterion DVD of Close-Up, I hadn't even heard of it. What a find.