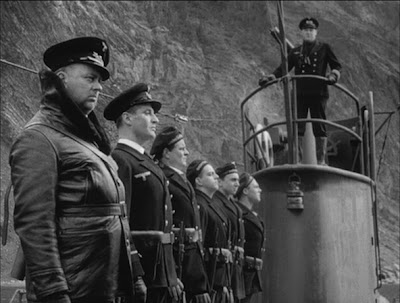 Of Powell and Pressburger’s earlier films, 49th Parallel is not just one of their most enthralling and absorbing pieces of cinema, it is one of the most fascinating war films from the WWII era. At the time, they were commissioned to create an anti-Nazi propaganda film that might have encouraged to join the war. They set out to create their film using an international cast, gorgeous on-location shooting in , and employing one of the most fascinating plots and set of protagonists that this era ever produced as far as WWII films go. I had seen this film once before several years ago, but I sure didn't appreciate as much as I did during this second viewing. 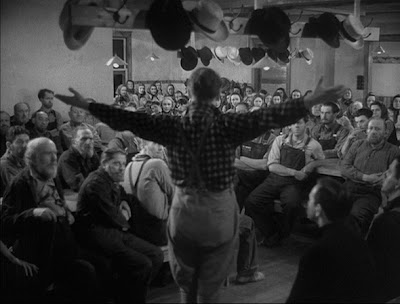 49th Parallel involves a fictional story of a German submarine which has invaded Canadian waters and has decided to hunker down in in order to allow time to gather food and supplies from a nearby company store. While a search party has left the submarine, the Canadian air force bombs the submarine while it is afloat, thus marooning the Nazi search party on land. These soldiers then embark on an odyssey of sorts to preserve themselves and survive at all costs. Throughout the film, the Nazis encounter many people and situations, all of which highlight various intentions of the Nazi regime, as well as the prevailing argument against the regime, thus allowing the argument against to play out in surprising detail. 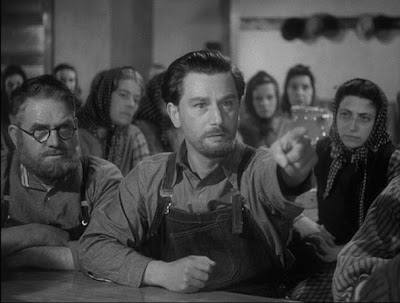 ﻿
There are three key setpieces, each involving a cameo of sorts by a terrific actor. Laurence Olivier plays Scottie, a French Canadian trapper hanging out at the Hudson Bay Company store with an old friend when the Nazis arrive. This sequence, although somewhat undermined by Olivier’s awful accent, highlights not just the swift brutality of the Nazi soldiers as they beat an Eskimo, shoot people in the back including women and children, but this sequence also highlights Nazism’s troublesome attitude toward religion. During his dying breath, Scottie threatens to send missionaries their way when the war is over. The second, and probably best setpiece, and also most compelling portion of the film, is set in a German Hutterite community that the Nazis encounter along their travels through Canada, thinking they may find a kinship with their German brethren. The Nazis give an impassioned speech to the community, calling upon their brotherhood to join in the Nazi purpose, but their words fall on deaf ears. In an even more intense response, Anton Walbrook as Peter, one of the Hutterites, calls them out as the socially constricting and morally reprehensible scourge that they are.  His speech is probably the best anti-Nazi propaganda moment in the film and a brilliant monologue from one of the most intense of actors. In the third key setpiece, as the Nazi group is down to 2, they come across Leslie Howard as Phillip Scott, a writer and outdoor aficionado in . Howard surrounds himself in his tent with art and books, which of course the Nazis debase and burn with pleasure when they turn on him, highlighting the stamping-out of individual expression. 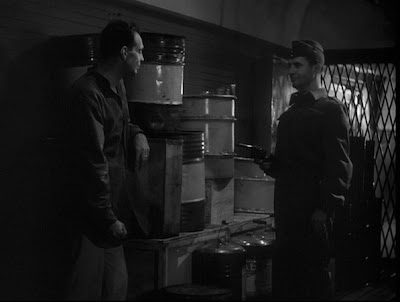 ﻿
All of these elements were of course used for propaganda, but it’s thoughtful propaganda woven into a tight, thrilling narrative. Not only is the action suspenseful, a la Hitchcock or Reed, it’s filled with the kind of filmmaking flourishes that Powell and Pressburger are known for, thus making it both a first rate WWII thriller and a thoughtful piece of historical propaganda. By making the Nazis into the protagonists, we must urgently come to grips with their immediacy and reality. They are not faceless enemies in the distance. They’re looking right at you. It’s hard to view this type of film within the proper context in which it was originally shown and to really understand what it might have meant back in 1941. But even today, the film stands as a lasting reminder of how propaganda was used and is also one of the finest WWII films of its era.
Posted by Jon at 7:00 PM

Another really excellent film by the Archers. Emeric Pressburger, as a Hungarian Jew who had worked in Germany, was extremely good at articulating exactly what was wrong with Nazism in a way that did not take away from the humanity of the people more than they had themselves. He was able to show them as evil without giving them the motivation of "being evil," as well as pointing out the greatness of Germany in the past and wishing it could be so again. And Anton Walbrook was actually German (or at least Austrian), so his portrayals have a strong added poignancy and nuance regarding the nature of Germanness and Nazism. The Life and Death of Colonel Blimp also has a powerful anti-Nazi speech in it.

I like what you say about the Nazis being the actual protagonists; an obvious point, but one I hadn't thought of before. Who does that in a propaganda film?? One thing I like to compare films like this (and perhaps John Ford's They Were Expendable, or other things like Thirty Seconds Over Tokyo) with Nazi and Communist propaganda. I guess I've never seen anything they turned out during WWII, but glancing back at Battleship Potemkin and Triumph of the Will, there are some striking differences in the whole approach. You could argue that those latter two were more artistic, or at least did more to define film language, but they have so little humanity to them. They define everything in terms of collectives and causes, and (aside from Hitler, I guess) never actually single out any single person as a hero or character. Everything's mechanics. While in the British and American films, as sloppy as some other ones are, and as ethnically exaggerated as cartoons especially were willing to depict the Japanese, they all identified genuine human protagonists and showed sacrifice and heroism as an individual trait. And that, I think, is a pretty important moral point.

Wow Stephen this is a tremendous comment and one the best ever posted at this site. I completely agree with you on all points and you're right, even though the Nazis here are the "bad guys", they are clearly human beings, with feelings etc. That makes the film all that more conflicting and rich. This is a brilliant point, and one I failed to touch on that you did here. Walbrook is simply marvelous here and you're right, there is an added poignancy to his role here and even moreso in Blimp. In some ways, this is a Propoganda film, but it's almost turned inside out in a way. It makes it's points, while still humanizing the entire thing, which you're right is very different from the Russian/German films you mentioned. Bravo Stephen thanks for expanding the dialogue here.

A terrific early film by Powell and Pressberger that rates with Olivier's HENRY V and Reed's THE TRUE GLORY among war time propaganda films offered up to stir up the nation before America's later entrance into the fray. Freddie Young's beautiful cinematography superbly negotiates the Canadian landscape, and classical composer Ralph Vaughan Williams contributes a distinguished score. Some excellent performances, including Leslie Howard, who I always remember. Yes, there are plot holes, but the film works in very large measure and all in all it's exceedingly entertaining. It does not rank with THE LIFE AND DEATH OF COLONEL BLIMP, BLACK NARCISSUS, A MATTER OF LIFE AND DEATH and THE RED SHOES in the pantheon of P & P artistry, but in the memorable scroll of propaganda efforts aimed at stirring a nation, this is one that will always stand tall. The film is also significant in that it was edited by David Lean.

You have provided teh blogosphere here with an exceptional and appreciative essay that frames this film superlatively. I am greatly enjoying your continuing series on this iconic duo's incomparable work.

I also want to say that Stephen Morton's comment here is spectacular.

Thanks Sam! Yes I absolutely agree with all your points and you bring up David Lean who makes some great contributions here. I think what's fun about this film, is its relative cinematic understatement coupled with its more overt political statements. It's such a great blend here. By cinematic understatement, I just mean that visually it's not as overwhelming as those other films you mentioned, and partly it's due to the black and white instead of color. Haha thanks glad you're enjoying these P and P essays of late. I will surely pick them up again in the future. It's been awhile since I've seen Black Narcissus and I'm due to see that one this year.

We're linking to your article for World War II Movies Tuesday at SeminalCinemaOutfit.com

Keep up the good work