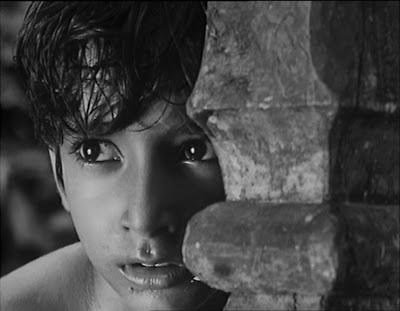 Satyajit Ray’s landmark trilogy about a boy named Apu who grows up to be a man across the span of three films, have been rightly called some of the greatest humanist films in all of cinema. They are referred to as The Apu Trilogy. Made in , Ray began the trilogy with his first film Pather Panchali (1955), followed by Aparajito (1956) and the last being The World of Apu (1959). At the time they were rightly recognized as the universally truthful films that they were and have held steady over the decades as incredibly important works both within the Indian film movement and across all of cinema as well. Ray is also, clearly, ’s greatest filmmaker and went on to great international acclaim following these films. 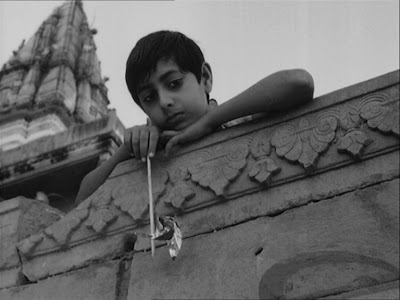 Pather Panchali is the story of a family. We meet a mother, a father, a sister, and a great aunt. Then comes Apu. He is born into a world of near poverty as his father and mother scrape by on little means. He and his sister find fun and adventure in whatever ways they can and they learn through the careful teaching of their parents how they should live and treat each other. This film contains such wonderful acting from all the main players. A standout is Karuna Banerjee as the mother, who does incredible acting with her eyes, conveying all the sorrow and regret of a woman who feels she has made some mistakes in life and is not able to correct them. A terrible tragedy strikes the family toward the end of the film, forcing them to move from their ramshackle home in the country to the city, as the father is forced to find better work. This might be my favorite film of the trilogy and is even more remarkable considering it was Ray’s first film. His triumph in this film is that of conveying an intense passion for the rhythm of life. What we are introduced to additionally, is the naturalness of the acting, the quiet and observant point of view and the pulse of everyday situations. So much natural beauty is found by Ray’s technique that much of the film feels documentary–like. This naturalness adds to the universality of the themes and family relationships. 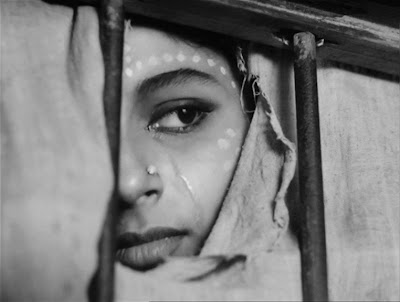 In Aparajito, Apu is living with his family in the city, finding a different rhythm to life where everything is bigger and busier. His father takes ill and dies very early in the film. Apu moves with his mother back to the country and yearns to attend school as he gets older. Teachers find that Apu has a remarkable ability to learn and Apu scoops up every bit of knowledge he can gain. His perseverance and hard work allow him to graduate and Apu begins to step into manhood. This film again shows Ray’s uncanny ability to find actors who can convey incredible emotion without saying a word at times, but just by keeping the camera fixed on the eyes. It’s debatable, but this film might be the saddest and darkest of the three, with major tragedy striking Apu twice here. Apu though continues on with his schooling and is determined to persevere through all circumstances. It’s an inspiring film that in the face of such odds, Apu is able to achieve his goals. 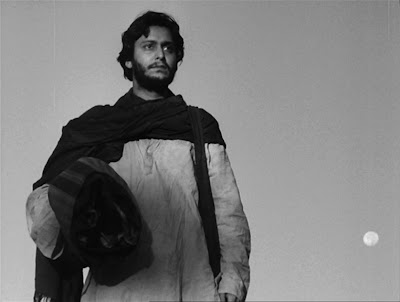 Ray’s final film in the trilogy is The World of Apu. Apu is now graduated from college and is seeking employment and searching for love. He has a difficult time finding both but in a fortuitous turn of events, winds up getting married on the spot to a complete stranger, in a marriage ceremony planned for someone else who backed out. This plot twist yields one of the greatest stretches of the entire trilogy as Apu and his wife get to know one another in a common struggle of bending their wills and their desires to meet each other’s. Ray's trilogy is completed following intense amounts of pathos and heartbreaking emotion as the story goes places that are incredibly inspiring. It’s at this point that I must bring up the brilliant and moving score composed by Ravi Shankar that weaves through each film. became internationally famous later on in his career as a mentor and sitar teacher to George Harrison of The Beatles. I would call his pulsing sitar scores in these three films to be some of the best composed soundtracks of all time. Furthermore, this trilogy might be the best trilogy of all time when you consider the quality and consistency of vision in all three films, without so much as a letdown from one film to the next. Ray’s greatly humanist portraits of Apu and his world are life affirming in the best way possible.
Posted by Jon at 7:01 AM

Great review of one of the truly great trilogies ever made. Each of the films, individually, rank among my favourites. However, if one were to ask me to pick my favourite among the three, my personal view would be Apur Sansar (The World of Apu) was the best among equals.

Given the enormous fame that the first & the final chapters of the series garnered, it is unfortunate that Aparajito (The Unvanquished), despite its brilliance, at times tend to get lost. The most memorable aspect about Aparajito, for me, remains the kind of guilt conscience that Apu suffers from when his mother expires - his sudden heart-wrenching realisation that he has been neglecting his mother in order to pursue his education.

I'd recommend that you read about the making of Pather Panchali (Song of the Little Road), if you haven't already. The kind of ordeals that Ray had to go through to raise money to complete the film, as well as the strokes of luck that he had in the process, make for an incredibly interesting read.

Satyajit Ray ranks as my favourite filmmaker. And, quite interestingly, if you were to ask me to rank his works according to my personal favourites, Apu Trilogy wouldn't make it to the top - that shows the quality of his filmography.

During your review you made a statement that Ray clearly remains the best Indian filmmaker of all time. He clearly remains the most universally recognised of all Indian filmmakers. But, you might be interested to, a sizeable chunk would opine that Ritwik Ghatak (one of Ray's famous contemporaries, along with Mrinal Sen & Tapan Sinha) was even greater than Ray. Unfortunately for Ghatak, unlike Ray, he isn't as well-known outside Bengal, leave alone India, though only recently people have been slowly coming to recognise his contributions to cinema. Ghatak was a staunch Communist, highly anti-establishmentarian & a big-time alcoholic - so there's no surprise he was shunned by the puritans during his time. The fact that he was the polar opposite of what Ray stood for, and yet that they both tremendously respected each other's works, is a great subject for study.

I absolutely know that Ray is your all-time favorite director, and it reminded me that I wanted to re-see this trilogy and also find some more films of his. Looks like The Music Room is a new Criterion DVD. I definitely defer to you on the topic of Indian cinema, and don't doubt that perhaps there are other brilliant Indian directors I'm not aware of, so this is a good mention of another director that people should seek out. I should have probably said "most famous" rather than "greatest" when referring to Ray, although I'm sure in some circles he would still be considered the greatest. Thanks for your tremendous comment. I can definitely see why you would pick The World of Apu as your favorite. It is filled with immense feeling. I agree with you about the regret that Apu feels when his mother dies. He is really torn up about sacrificing his time away from his mother.

This is one of the greatest series of film in the history of the cinema, and as you note many rightful think it's the pinnacle of humanist cinema. Ray is a very great director, one of whom Kurosawa famously said:

"To have not seen the films of Ray is to have lived in the world without ever having seen the moon and the sun."

Shubhajit mentions that some critics maight rate Ghatak higher, but as much as I adore THE CLOUD CAPPED STAR, he hasn't much work to argue his case. Ray is ten times more prolific, and in addition to this great masterpiece trilogy (the first film, PATHER PANCHALI is the best methinks) Ray has several other masterworks--DEVI, DAYS AND NIGHTS IN THE FOREST, CHAULATA and THE MUSIC ROOM. But still others there push close.

This is a masterful review full of passion and authority that well serves it's subject, Jon.

Sam thanks for your wonderful comments here. I am beginning to find more of Ray's films available and am looking forward to seeing The Music Room as it's a new Criterion. I agree with you about Pather Panchali and think it just might be the best of the 3, but it's a close call. Thanks Sam!