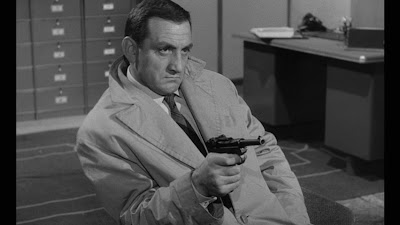 In Claude Sautet’s Classe Tous Risque, we are given a portrait of a gangster that is uncommon in French cinema: that of the fully-developed character. Lino plays Abel Gavos, a lifetime crook, connected to an extensive network of fellow gangsters. He is the father of two boys and has a wife named Therese. Hiding out in , Abel and his family realize they must get back to to avoid capture. When they return, they are ambushed and Therese is killed. Abel must pick up the pieces and care for his two sons by himself, trekking across the country while trying to avoid arrest and ultimately ending up in for a showdown with his old friends. 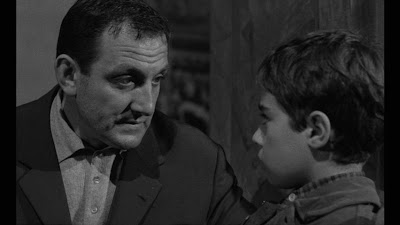 Lino ’s hardened criminal and caring, devoted father is such a living and breathing person. He has several beautiful scenes with his two boys. One scene that works really well is when he gives instructions to his eldest son while they are sitting in a church, basically telling the boy that he must carry on and take care of things if he is captured. So much of Abel’s heart is poured into this scene that we forget about the bad things he has done in his life and we just want him to be able to get to safety and take care of his family. We are sympathetic with his plight, whether he deserves it or not. This is rare to find this depth of character in neo-noir or post-noir films, especially when compared to those by Jean-Pierre Melville. I reviewed at length two films by Melville, Le Doulos (1962) and Le Deuxieme Souffle (1966). Where Melville’s films are all calculated, perfected detachment, Classe Tous Risque is realistic, more improvisational and lifelike. Melville’s films are peripherally emotive, coming at you through the cumulative effect of ennui and the occasional burst of violence. Classe Tous Risque is directly emotional, pulling at our feelings for this father as he lugs his kids around. We know he is a devoted father because we see the way he is gentle, playful and kind with them. Furthermore, Sautet's frame is not as formalized or composed as Melville's. This is a more natural and realistically shot picture and doesn't feel like there is a strict sense of mise-en-scene. It's not that I prefer this film to Melville's, but it's nice to mix it up once in a while. 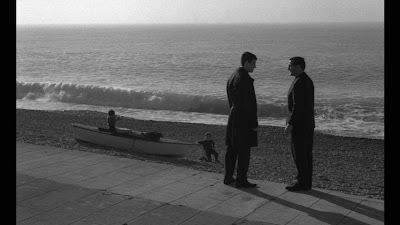 In another key scene, once Abel comes back to , he meets up with all his old gang at a hangout. One by one, we realize that no one will help out Abel and his family. Everyone has an excuse and nobody will risk any more than they have to for their old friend. It’s a slow-burn scene of betrayal as cold as any in cinema history, marked by an incredibly pent-up display of anger by Lino Ventura as Abel. In fact, I would highlight this moment as the best scene in the film and the one that sums up Abel’s plight. We sense his frustration both as he realizes how few friends he has, but also his fear for the welfare of his family. He is terrified of his unsure future and has become cornered where he has few options left. 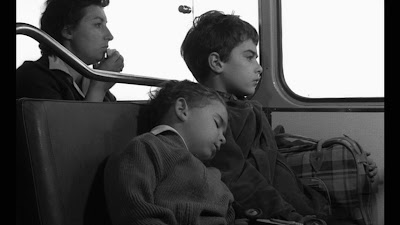 Seeing Lino Ventura opposite Jean-Paul Belmondo (as Eric Stark, the gangster chauffeur), is another huge reason for why this film succeeds. These are two towering French stars of the 60’s and they couldn’t be more different in their styles, with Belmondo and his super-cool, playing off ’s bulldozer facade. Their interaction here is brilliant stuff and the script gives them ample opportunity to spend time together. I’m not sure how Sautet pulled off the coup of getting these two stars in this film together (although it was relatively early in their careers), but it was a fortuitous choice and really makes this film pop. Sautet did not go on to have the illustrious career like many other French directors of the time, but he sure left his mark with this one, giving us a unique look into the life of a gangster.
Posted by Jon at 2:38 PM

Great review. This still gets overlooked, it seems, by a lot of French crime fans but it really made me a Lino Ventura fan. He's as good here if not better than in Melville's Le Deuxieme Souffle, which is classic stuff in its own right.

Hey Samuel! Glad you like this one as well. You're actually right about Ventura here and I think this is probably his best performance. Might be no coincidence that he was given a character with more going on. He could do more than just look tough as proven here.