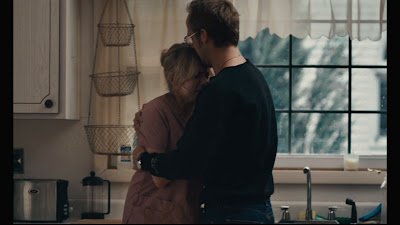 "A relationship, I think, is like a shark, you know, it has to constantly move forward or it dies, and I think what we got on our hands is a dead shark."
Woody Allen- Annie Hall (1977)
Woody Allen's quote seems to apply to the marriage central to Blue Valentine. Cindy (Michelle Williams) has moved forward with her life, but Dean (Ryan Gosling) has not followed suit and is not joining her on the path. He has remained stagnant, inert and content with the status-quo. She is more ambitious and regretful, dragged down by his malaise, seemingly preventing her from bettering herself. He wants things to be normal and the way they’ve always been. She saw marriage as just the beginning. He saw marriage as the final goal and is content with that. Dean and Cindy’s relationship is kind of like an egg yoke at this point in time: the slightest pressure is applied and it runs all over the place. 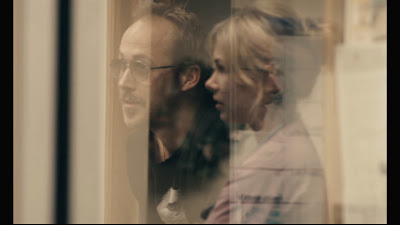 Derek Cianfrance’s film concerns Cindy, Dean and their daughter Frankie, who’s caught in the middle of a marriage crumbling beyond repair, one that is wallowing in a state of paralysis. Cindy and Dean drop off Frankie at the grandparent’s house and Dean convinces Cindy to stay at a “love” motel in order to rekindle and reconnect. This film documents basically a 24 hour span of time through the night into the next morning as they reach a point of no return in the relationship. During this time, they clash with each other sexually, physically and emotionally. Present scenes of bitterness, misunderstanding, hatred and regret are intercut by scenes of the beginning of their relationship, ones of tender, funny, awkwardly romantic moments that make the present scenes all the more poignant and painful in my opinion. 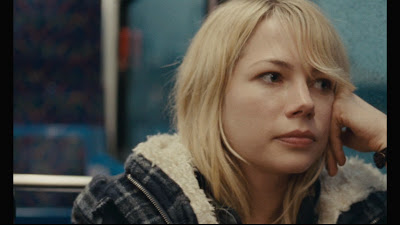 ﻿
This is a film that truly cares for its characters despite their flaws and inabilities. They are both equally sympathetic and unsympathetic at times and yet the film genuinely feels for them. I found that I was invested in the outcome whether Cindy and Dean deserved it or not. Cianfrance chooses to film the "past" scenes with a more open-eyed optimism. Scenes are bright, clear and infused with a joy and improvisation. "Present" scenes are darker and murky, cluttered in the frame and rarely do we ever see both characters in a two-shot. They are isolated and disconnected from each other both in the frame and in their lives. Cianfrance infuses the whole film with a tone I will describe as achingly mournful. This tone at times can be sentimental and nostalgic, but with a realism that belies any thoughts of melodrama. We are only given the beginning and the end of the relationship, not the complete middle section. This is not a flaw but a trusting of the audience. Do we really need to see the entire middle of their marriage where it slowly disintegrates? Can’t we fill in the gaps ourselves? We don’t need to be pandered to and Blue Valentine gives us the benefit of the doubt. 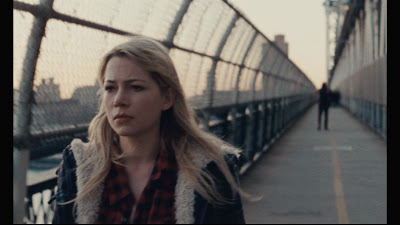 Ultimately, this is a film that succeeds on the talent of its leads. I’ll admit I came into this film already a huge fan of both Ryan Gosling and Michelle Williams. They are two of my favorite actors working today. Gosling brings great presence and intensity to films like Half Nelson (2006) and Lars and the Real Girl (2007). As for Michelle Williams, I’ll go so far as saying that I think Michelle Williams might be the best American actress working today, and possibly the best anywhere, with Amy Adams and ’s Carey Mulligan making a run for that title as well. Williams has been absolutely remarkable in a string of films going back to . She has brought truth, clarity, and credibility to roles in , , and Wendy and Lucy (2008). I can’t wait to see her in the new film Meek’s Cutoff (2010). Blue Valentine is a showcase for her incredible range. What I notice about her acting, is that I don’t notice it. She never seems like she’s trying very hard and you can’t “see” the acting. She just is the character and that’s that. You’re never thinking there is a false move and she totally gets it. She can do comedic, lighter moments and terribly emotional ones without ever seeming like she’s forcing it. One scene where Dean and Cindy meet on a bus and Dean is trying to ask her out is probably the best showcase for both Gosling and Williams. Gosling is the awkward guy, trying to be cool but sounding stupid. Williams plays it cautiously and reserved, trying to avoid making eye contact and yet cannot resist his bumbling courtship. I’m not normally a big fan of actor movies, preferring the director’s talents to the actor’s, but this one is undeniably great because of the acting. I think that’s what makes this film so painful and wrenching to watch at times. Both Gosling and Williams are so real, likable and watchable that it pains us to watch them as these people who just can’t function together. As an audience, Blue Valentine puts you through the wringer. It's intense, honest and tends to be a downer, but I found the truth contained to be well worth the journey.
Posted by Jon at 7:04 PM

Yes Jon, it is a downer, and leaves little room for reconciliation of any kind, but as you note this is a kind of slice of life drama that takes no sides and offers no solutions. Gianfrance told the Angelika Film Center crowd on it's late December, Friday evening opening that he think she "was boen to make this film" and the results seem to back him up. I agree that Williams is astounding, and that Gosling is explosive, and there are some scenes that rip your heart out. Gianfrance said that the bridge scene was completely improvised by Gosling, and that he kind of defied the camera crew by scaling the fence, and act they thought too dangerous. The scene near the end when Gosling punches a doctor is raw and electrifying but so is most of this searing drama. Jon, this is a great review here! I loved revisiting the film, and did see your comment at WitD.

I am not trying to promote anything, but I did indeed review it back on December 30 at the site, and the comment thread was remarkable:

Hey Sam thanks for stopping by! I actually was just poking around at WITD and found your review 10 minutes ago. Great review on your part too and fascinating stuff about Gosling and the bridge scene. What's nice about the improv that happens in the film is that it still seems like what the characters would do. They never step out of themselves. It's one of my top 2-3 of 2010 as well. Thanks again!