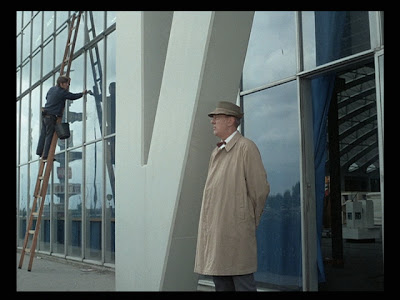 Jacques Tati made only 6 feature films in his brilliant career, but his cinema is magical, idiosyncratic, and highly inventive. His late career film Trafic, actually his final film released to theaters, is a great capstone and fitting end to a string of films that are incomparable. Tati starred as M. Hulot, a pipe-smoking, umbrella-toting, awkward looking fellow, who seldom looked comfortable with the world, nor the world comfortable with him. He always wore a too-big raincoat that looked balloonish around him, while wearing pants a few sizes too short. M. Hulot's Holiday (1953) concerned the title character's attempts at relaxation at a seaside hotel in Brittany, France. Mon Oncle (1958) saw M. Hulot's attempt to comprehend the latest in technology at a relative's household. Play Time (1967), Tati's most ambitious film, allowed us to watch M. Hulot become literally swallowed by a modern city of steel and glass. In Trafic, M. Hulot is a car designer attempting to get his latest design, a camping car, with his team in tote to the international auto expo in Amsterdam. 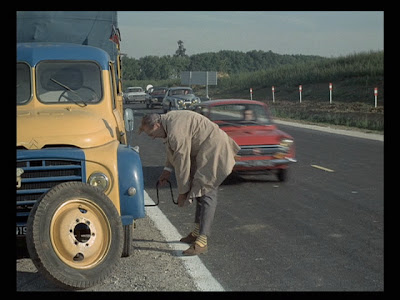 Tati's comedy is one of endless sight gags and brilliant timing. There is very little dialogue in the film and that which occurs is mostly side conversation to the action. I found this film to be somewhat more hilarious at times than all his other previous films, if maybe a bit less ambitious. Nonetheless, three brilliant sequences lead to big laughs. M. Hulot attempts to get a large van's tire changed next to the highway, all the while being buzzed in the rump by passing cars. Another inventive scene is where M. Hulot introduces all of his car's gadgets and gizmos at the police station. Perhaps the funniest scene in the film is of a car crash where all the injured parties come stepping out of their cars with aches and pains in different spots, creating a choreography of neck rubbing, back rubbing, and elbow twitching. Watching this scene in particular makes me think of dance choreography for some reason. In fact, one could argue that Tati invented a cinema choreography all his own. No other filmmaker ever worked with the sort of mise-en-scene and comedy that Tati did. Not even Chaplin or Keaton attempted to throw this much into a frame. 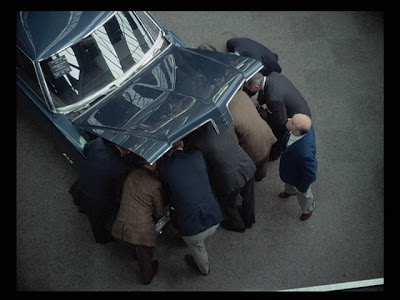 Nothing that occurs in Tati's films feels like real life. There is always the sentiment that what we are seeing is exaggerated, like a cartoon played out in live-action. But, he seemed obsessed with making us take stock of what we do in our daily lives and finding the humor contained there. Tati lampooned our social oddities, absurdities, and obsessions. We are always striving for bigger, better, faster and more. Tati seems to always be asking us whether this progress is the best way, whether we truly are improving ourselves, or are we just making things more complicated? Tati was able to take a step back and make us laugh at our ambition and our daily lives through the lens of his camera. Interestingly, at the end of the film, M. Hulot is fired from his job as car designer. It's a dose of bad news at the end of an upbeat film. Tati never made another film featuring M. Hulot, and perhaps he was giving a notice that he would never appear as him again. In fact he never made another feature film, only directing the Swedish TV film, Parade (1974). In my opinion, Trafic is underrated in Tati's cannon and is a perfect send-off for M. Hulot.
Posted by Jon at 9:02 PM