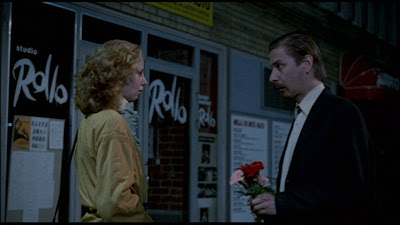 ﻿
Finnish director Aki Kaurismaki made a series of three films from 1986-90, now known as the "proletariat trilogy" as packaged by Criterion. They are Shadows in Paradise (1986), Ariel (1988), and The Match Factory Girl (1990). I just watched all three of them on successive nights and had never seen any of them before. These are all films examining the lowest class of society in which the characters struggle to get above the poverty line, working blue-collar jobs if they have a job at all. Kaurismaki's script makes particular use of the potential humor found within this world where everyone feels like a cog in the wheel of life. These are all beaten down characters and life has become a series of habits and instincts. Kaurismaki throws in some very dark, dry humor into these films which lightens the mood considerably from the bleak surroundings, elevating all three films into something unique. 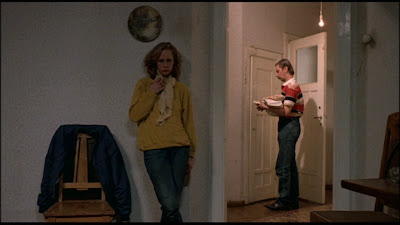 ﻿
All three films are good in their own right, but Shadows in Paradise is the best of these three in my opinion. At its heart, this is the most uncharacteristic romantic comedy ever made. Nikander (Matti Pellonpaa) is a garbage man. This is not only his job, but it's his identity. He's single beyond all hope, but meets Ilona (Kati Outinen), a wallflower and cashier at a grocery store. They have an awkward, kindred moment together in the checkout line. From that point, their relationship (and the lack thereof at times) is what drives the film. Yet it's the brilliantly dry performances of the actors that makes this immensely watchable. Kati Outinen and Matti Pellonpaa truly embody these characters. They understand their quirks and what makes them tick. To say these are completely understated performances is an understatement in itself. You have never seen anyone so mopey on screen as these two, yet they are hopelessly romantic and you root for them even though they are so pathetic. 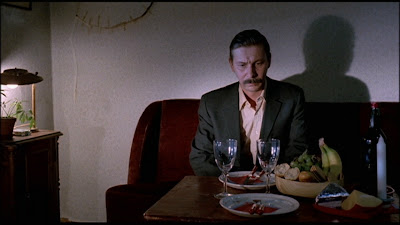 In a way, Wes Anderson shares quite a bit in common with Aki Kaurismaki. I wrote a review recently of Wes Anderson's The Royal Tenenbaums, discussing his use of dry, emotionless acting to add to the mood and comedy of his films.  Here I go again espousing this type of film. I mentioned Buster Keaton and how he perfected the stoic comedy. Aki Kaurimsaki, Wes Anderson, and even Jim Jarmusch in films like Dead Man (1995) and Ghost Dog (1999) make use of this dry humor with similarly rewarding results. Kaurismaki's genius script is sprinkled with little bits of slang and in-jokes that come across as hilarious. I'm not sure why I like this kind of movie, but I do find this very funny. I also find these types of films are a bit more intelligent, as far as comedies go. Even Kaurismaki's continued use of American Jazz and Blues music throughout the film adds to the odd and darkly comical tone of the film. 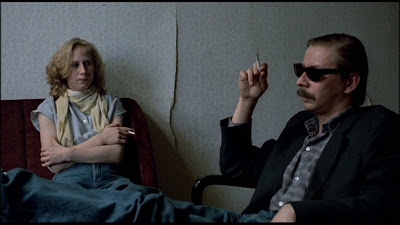 Timo Salminen has continually been Kaurismaki's cinematographer over his career. His work here is nothing less than inventive. His greatest achievement is using the frame to enhance the developing romance or emphasize the divide between the characters as the camera observes their interactions. We always feel like we're privy to the quiet lives of Nikander and Ilona and the camera never gets in the way. Although really short at 76 minutes, Shadows in Paradise doesn't feel rushed at all. We watch the beginning of the relationship and it plays out in front of us: completely, slowly, cautiously. This is a brilliant little gem of a film from a director who is probably the greatest his country has ever produced.
Posted by Jon at 7:01 AM