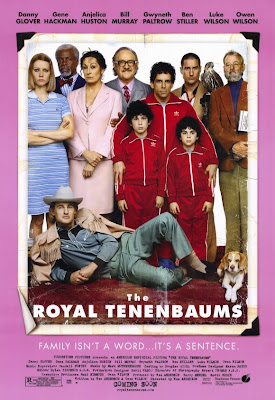 Wes Anderson's films seem to always balance a fine line between comedy and tragedy. Sometimes they spill over to one side or the other, but they usually remain well balanced. This one is about Royal Tenenbaum (Gene Hackman) who in his later years is trying to woo his wife (Anjelica Huston) back and reunite his pathetic kids (Gwyneth Paltrow, Luke Wilson, Ben Stiller) back into the fold.

I think the first half of the film plays more comedy. It's a very particular kind of comedy though. Anderson's actors are always trained at the Bill-Murray-Deadpan-Dry school of acting. Nearly every ounce of emotion is drained from the actor's faces and they deliver every line in a monotone, dry voice. This stone-faced acting can be referenced back to the "The Great Stone Face", Buster Keaton. He acted in his silent films with the driest, most stone-faced expression. Watch a film like The General and tell me there isn't a line drawn to Bill Murray and the others in this film. 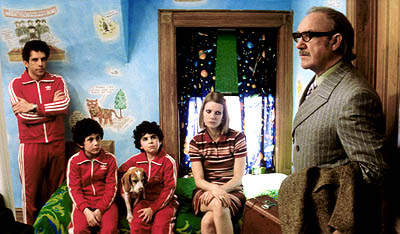 What sets up the comedy is a mise-en-scene that is very manicured and perfected by Anderson. Everything about the sets, from the decor, the outfits, the hairstyles seems to add up to a greater purpose. Anderson sets up every shot in this symetrical fashion where he uses the entire frame to present us a picture, complete and an entity unto itself. Often he places several people across the frame in a row, or a single person in the middle of a wideshot. I think this creates an artificial appearance, a doll-house world in a way. So much care is placed to everything in every shot that we can't help but sense the artificiality of the world in which these characters live. It's this doll-house quality that sets up the comedy. But, it's an introverted comedy, not extroverted. Extroverted is The Marx Brothers, Dumb and Dumber. This is something else. Anderson's films remind me of the great Jacques Tati, whose "silent" comedies in the 50's and 60's are remarkable. I say silent in the fact that although sound is employed in the film, it's not dialogue that provides the comedy. It's the mise-en-scene and the actions and coincidences occurring in the scenes that are funny in a very amusing, whimsical way. I remember watching Tati's Play Time at the Music Box Theatre in Chicago several years ago in 70MM. I was awestruck at the massive use of widescreen to fill the frame with the set. Every inch of the frame was used to set-up the comedy and the effect of the whimsy. Tati was clearly a perfectionist in the way he created his artificial world. Anderson is similar in this way and took this "doll-house" approach to the extreme in his next film, The Life Aquatic with Steve Zissou. Anderson had a large set created of a side-cutout boat where the viewer can see all the rooms in the boat and everyone moving about. I think The Royal Tenenbaums is not quite to this extreme, but it's the way these characters move about within this world that creates both the comedy and the tragedy.

This is also a very self-aware and self-referential film, reminding me of the cinema of the French New Wave, particularly Jean-Luc Godard in films like Breathless, Band of Outsiders, and Masculin, Feminin and also Jacques Rivette's Celine and Julie Go Boating. These are films filled with in-jokes, cinema references, hipster moments of cool, and a pervading sense of self-awareness. That was what the The French New Wave was out to do. Break down the barriers of cinema and create movies for people who knew movies. They wanted to do things their own way and not follow the formulas. Anderson clearly enjoys making movies for people who like movies and doing it his way. 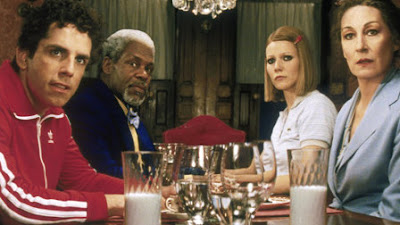 ﻿
Some other motifs I noticed? One is the contant use of pink and red. It reflects the heart of the film and the emotions of the characters as they wade through the family garbage. At one point, one character actually bleeds his love for another. Everyone is pining for another and several hearts are either broken or will be broken throughout the film. Also there is the theme of the "place of respite". Characters retreat to closets, bathrooms, and even tents in order gain some peaceful moments away from the chaotic family dynamic. During the second half of the film, the tragedy comes more to the forefront and there's a pervading sense of melancholy. It's not like it turns on a dime, but the film does switch over midway through and changes tone.

I really love Wes Anderson's movies. I don't think any actor/actress will ever win an award in any of his films, but it's his sense of direction that I love to submit to. There's a sense that he has complete control of what his film is doing and where it's going.
Posted by Jon at 8:53 PM