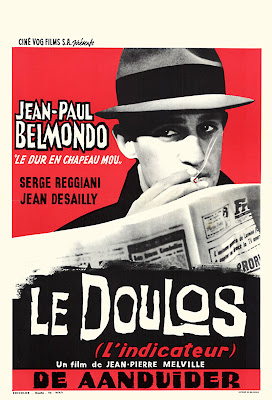 ﻿
I'm delving into a 2-part essay on one of French Cinema's greatest and most revered directors, Jean-Pierre Melville. Le Doulos was released in 1962 and is firmly rooted into his "early" period of films, where there is a bit more playfulness and the tone is lighter than what occurs later in his film career. Melville worked within the genres of the gangster, cop, hit-man and heist film, almost exclusively. In the process, creating a new type of film noir. He borrowed heavily from the American gangster and noir films from the 1930s and 40s and turned the themes, moods, and decor from those movies into an almost zen-like, religious experience in his own films. All of the cigarettes, fedoras, trench-coats and dames in his films seem heightened to a level of near-parody, yet are balanced by low-key acting, soft jazz soundtracks, and carefully arranged compositions. It all adds up to something brilliant and utterly cool. 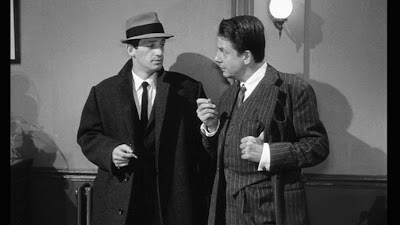 ﻿
Le Doulos' plot is quite convoluted when trying to describe it. Maurice (Serge Reggiani) has gotten out of prison and quickly proceeds to return to his killing and stealing ways. Old friend Silien (Jean-Paul Belmondo) apparently gives a tip to the cops where Maurice is planning his next heist. All hell breaks loose and soon everyone appears to be double crossing someone else. It's all completely crazy and brilliant at the same time. Melville's characters tend to be one-dimensional with a thud: The Crook, The Boss, The Informant, The Blonde etc. It adds this playfulness that I was speaking of, sort of a "comedic homage" to the classic films before it. Belmondo's acting fits well within this Melville early period though. Belmondo always seems to be sort-of winking at the camera, but never goes too far with it. It's hard not to think of him in Breathless, Godard's masterpiece, where he's improvisational and sly, but here he's able to show some restraint and shun a bit of his insouciance, appearing to be serious. 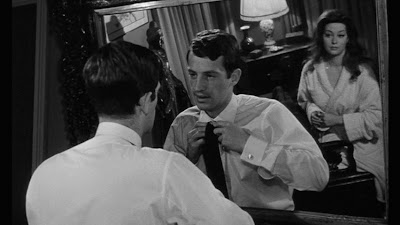 Melville's direction is highly economical. He eschews exposition and instead just goes for it. We pick up the story in bits and pieces as we go. Background information is parcelled out and therefore we never feel like things are overstated. Additionally, his films end when there is nothing left to say (or no one is left alive). In this way, Le Doulos is a very taut, masculine film. Nothing is said that cannot be shown instead. Nothing is shown that is unnecessary. It's apparent that stringing together several sequences of physical movements, such as lighting a cigarette, strolling around a room, playing with a glass of Scotch, holds as much importance in Melville's cinema as dialogue itself. Movements, actions and attention to detail are what matters here. 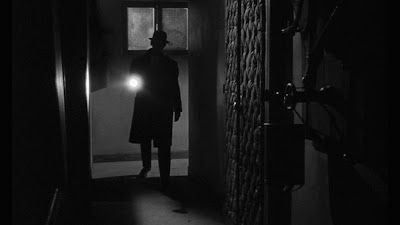 A couple scenes are especially standout. I love the 10 minute interrogation scene where Belmondo's character is questioned by the investigator in an extended take. Another is the inevitable shootout that jolts the viewer with its blunt force. It's a masterstroke of tension, mise-en-scene, and editing. Melville has a way of interspersing the underplayed acting with quick bursts of violence like this, which occur a few times in the film, adding resonance to key scenes like the finale. Melville never fit in with the French New Wave crowd. He's not less influential for it though. He refined and defined film noir forever with his collection of films. In my next post we'll look at how Melville began to refine his craft.
Posted by Jon at 9:24 PM