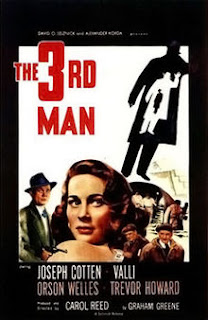 ﻿﻿
My favorite movie right now is The Third Man. My reasons? It's a combination of the locale (Post-War Vienna), the actors (Joseph Cotton, Orson Welles, Alida Valli), the story, cinematography, and music. Graham Greene's screenplay is slippery, featuring characters with multiple dimensions.  Holly Martins (Joseph Cotton) comes to Vienna to visit his old pal Harry Lime (Welles). When Holly arrives, he soon finds out his friend is dead. That's just the tip of an iceberg that contains blackmail, black market drugs, murder etc. It's great storytelling.
Orson Welles, though he only appears toward the latter third of the film, is just right in this movie. I can't imagine anyone else playing this role as well as he did. Orson Welles tends to dominate any scene he's in. Watch and you'll notice the way he uses his voice to act. I don't think he would ever be considered a great physical actor. I think he expresses a limited range of physical and facial motion. What he lacks in those departments, he makes up for in voice. There is nothing like hearing Orson Welles talk. I would have loved to share a lunch with him and chat and listen to him.
Few films have as iconic a soundtrack as this one. It's the zither music here by Anton Karas that hypnotises you and brings just the right intrigue to this film that gets better with each viewing. Check out "The Third Man Theme" below by Karas.
I find it interesting how several characters' names are mistakenly pronounced throughout the film. At one point, Alida Valli's character Anna refers to Holly as "Harry" in a state of tired sadness. I think these cases of mistaken identity parallel the fact that these characters really don't know each other very well at all. They won't ever see eye-to-eye based on their experiences and their tendencies. It's also a great examination of loyalty. Anna learns things about Harry that are not so pleasant. It's what she does once she learns that is compelling.
﻿﻿
﻿﻿ ﻿﻿﻿
﻿﻿It has been said by Roger Ebert that The Third Man bookends nicely with Casablanca. I agree. Instead of hope and optimism with Casablanca near the early part of the war, The Third Man is post-war, resigned to defeat, and dog-eat-dog.  Also, with the film being shot on location in Vienna, it brings credibility to the whole movie. It really feels like you're there. You can see the cold in the air and feel the texture of the place. Richard Linklater in 1995 directed Before Sunrise also on location in Vienna and also filmed a great scene in the Ferris Wheel like Carol Reed does. I can't think of Vienna without thinking of these two movies. They would probably make a great double feature.

It's not like The Third Man fits into an easy mold. There are no heroes, it's not a happy ending and no one gets the girl. But it really makes you think and it does not pander in any way. I've seen this movie about 5 times now. I get into it more every time I watch it.
﻿﻿
Posted by Jon at 7:06 PM

Jonny, this is an amazing movie for many reasons: the ferris wheel scene; the chase in the sewers; the closing scene - but it should probably win the prize for Best Lighting in Any Film! Love it.

Your blog looks great. I put it on my list. I need to spend more time here.

You're right! Yes the lighting is incredible. Love they way Welles is illuminated in the doorway in one of the greatest entrances/introductions in all of cinema. Thanks for the support as well. It's most appreciated as I'm new to this. I really like you're blog and have enjoyed your posts.