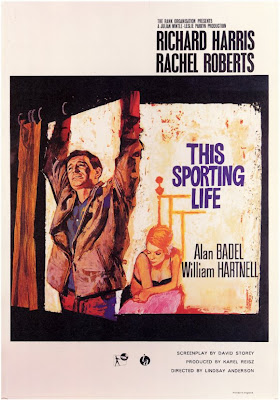 One of the lesser-discussed periods in cinema is the British New Wave, also known as the "Angry Young Men" films that came out of England from about 1959 to 1963. These were films where the central figure was generally a working-class guy, restless and disenchanted with life. Most of the directors working within this realm were trying to break loose from British conservatism in the arts, and produce socially realistic portaits of individuals. This Sporting Life is arguably the best film that came out of this period. I just recently saw it for the first time and was impressed by how good it was. It's the story of Frank (Richard Harris), who rents a room and has a relationship with a recent widow Margaret (Rachel Roberts) and her two children. Frank, who's a coal miner, tries out for the city Rugby team and turns into a local sports hero, setting the conflicts in motion for the rest of the film as he tries to remain true to the widow and children he lives with. 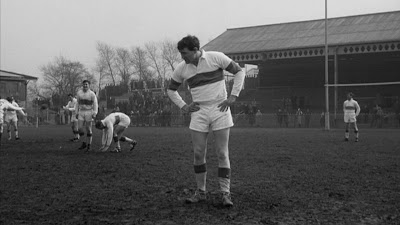 Lindsay Anderson's compositions emphasize the gritty urban environment where factories, bars and a hazy, gray suburban life unfolds. His fluid and uncanny use of flashbacks add punch to the story. Too often flashbacks are used as a cinematic crutch, either to keep information from the audience to build suspense or to just be gimmicky. Flashbacks in this film are basically the conscious/subconscious memories of Harris' character and they are interwoven effectively. I would submit this film as an example of how flashbacks can be used to enhance storytelling when used judiciously.

Although sports are a theme here, it's not really a "sports film", like Rocky or Hoosiers. It doesn't have that triumphant, redemptive feel in any way. I would say the film focuses more on Frank's mental struggles in his personal life rather than his confrontations on the pitch. He's clumsy, inconsiderate, yet incredibly loyal even to a fault. I was totally caught off guard by the potency of the script and the fiery performances by the two leads. Richard Harris (almost Brando-esque) and Rachel Roberts were both nominated for Academy Awards and their performances hold up well today. Harris plays Frank with a blend of toughness, cockiness and self-consciousness. Roberts brings the right mix of vulnerability and intensity to her part. Class struggle comes to the fore as Frank begins to rake in the cash from his rugby contract while still living with the poor widow. Several scenes ring true as Margaret becomes uncomfortable with Frank's new lifestyle. I was impressed by the chemistry between the leads. Bottom line is this is great storytelling and brought vividly to the screen by Anderson. 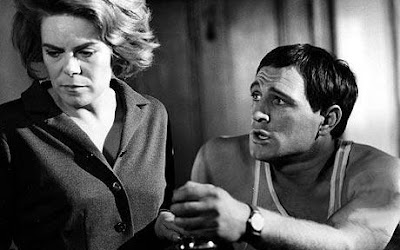 Lindsay Anderson went on to great acclaim in 1968 with If, a film that won the Palme d'Or at Cannes. If comes across to me as very dated and overrated now. He's much more successful here. Sometimes movies come out of nowhere and surprise me. This is one of those. After watching This Sporting Life, it makes me want to go back and revisit some of the other "Angry Young Men" films like The Loneliness of the Long Distance Runner (1962) with Tom Courtenay and Saturday Night and Sunday Morning (1960), starring a young Albert Finney. I think I overlooked these movies on first viewing and want to try them out again. I'll let you know if I can recommend them as highly as this one.
Posted by Jon at 7:03 PM