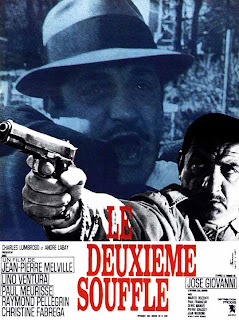 ﻿
In my previous post I talked about the early career and style of Jean-Pierre Melville in his film Le Doulos (1962). His 1966 feature Le Deuxieme Souffle is a great example of a filmmaker honing his craft and refining his themes. This is a natural progression. Melville here clearly changes his tone, compositions, and thematic elements to build upon the framework he set for himself with his earlier films like Le Doulos and Bob Le Flambeur (1956), all to an end that is at once more detached, yet filled with more feeling. 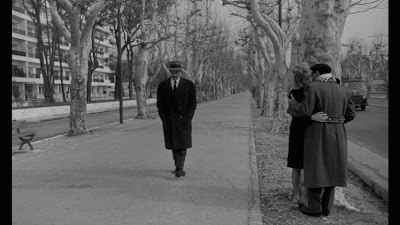 In this film, Lino Ventura plays Gu, an escaped convict who's hiding from the authorities while simultaneously planning his next heist. Inspector Blot (Paul Meurisse) plays the cat-and-mouse game to track Gu and arrest him. In plot, the scenarios play out in a way that we're fairly familiar with from all of the cop/gangster films that have come after it. It's the way that the film is put together, in the inimitable style of Melville that elevates the material. 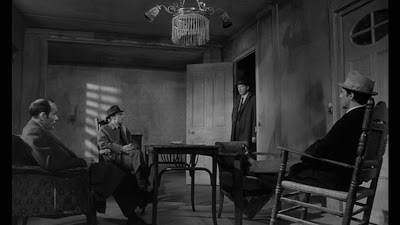 In examining the evolution of Melville, we note the change in tone from his earlier films. No longer is there the sense of homage or playfullness. We don't have the Belmondos of the world bringing their own inherent trendiness. Instead there is a greater sense of existential dread. It's a much colder world. Stark. Death is more scary and omnipresent instead of a necessary means as before. In this change of tone, as a whole, the film seems to be more important and therefore filled with more pathos and feeling. Lino Ventura is the perfect actor choice and is partly responsible for this change of tone. A great article on his acting style and the screen presence he brought to Melville's later pictures is well worth a read. In Richard Porton's piece he writes, "Ventura's hardboiled gangsters were neither suave nor flamboyant. He specialized in burnt-out, doomed men". This is a perfect example of the way the actor adds to the tone of the film that the director is trying to pursue. Ventura went on the star in Melville's very cold, yet personal look at the French Resistance (of which Melville was a part of) in Army of Shadows (1969). 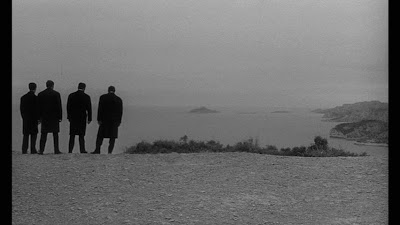 In his compositions, we notice that Melville is increasingly particular. Shots are artfully composed to a point where it becomes perfectionist. This is now a world where people are spaced just so and shots strung together creating a stark existence, one devoid of warm humanity. What a striking turn of events for Melville. In Le Doulos there was a kinetic sense of joy in the compositions. More of a warm homage to traditional film noir. Here we see death and gunfights play out more coldly and savagely. In this film's centerpiece we see a brilliantly staged armored-vehicle heist on some rocky cliffs, where we are treated to a basically wordless piece of filmmaking. Melville lets us watch as we see everything being set-up by the robbers and the entire act carried out with cold-blooded efficiency. It's a perfectly shot scene and emblematic of the way that Melville was creating this new type of haggard gangster film.  Faces are blank and world-weary. There's a point where we see Gu's girlfriend Manouche shed one small tear. It's a token really, but she's so empty and cold that it's a hopeless gesture in a moment of weariness. We're not even sure she's truly sad. Melville's next feature, Le Samourai takes the stark compositions and barren existence to a new level, albeit in color. It documents a lone hitman and his precise and exact world in which he lives. Jim Jarmusch's film Ghost Dog (1999) was a direct nod to Melville in Le Samourai. 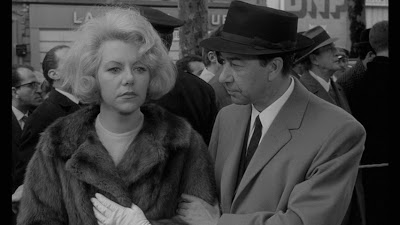 Differences in thematic elements that are perhaps most apparent in Le Deuxieme Souffle from Le Doulos are the emphasis on the ethics of the gangster and the cop. Ratting out and cheating are at once dreadful and necessary depending on your place. Inspector Blot, as the chaser, does anything he can, even lying and using coercive tactics to get his man to talk. Gu fears that he has ratted-out his friends by mistake, which tears him apart. It's this extra emphasis on the morales and tactics that elevates the story from a mere homage to more epic proportions. Cheating and lying in Le Doulos are so prevalent that it's almost treated with a bit of humor. In Le Deuxieme Souffle, it's serious business. Apparently, even gangsters have feelings, cold as they may be. Melville went on to focus more on these ethical rules in Le Samourai, but they're clearly present here.

Melville would go on to make even more refinements to his craft in Le Samourai (1967), Army of Shadows (1969), and Le Cercle Rouge (1970), showing even more restaint and creating an ever-greater feeling of detachment and existential crises. His work is essential and worth viewing in succession in order to fully appreciate the director's craft.
Posted by Jon at 8:14 PM

I watched and liked 4 Months, 3 Weeks, and 2 Days as well. I saw it on many decade lists and it was streaming via netflixs. Have you finished Rabbit Hole yet?

Oh yes you looked at the films I watched so far this year. Yes I actually think 4 months....is one of the top 5 films of the 2000's. It was incredibly powerful and brilliant. I thought it was near perfection actually. I watched Rabbit Hole. I think it reaches a bit too far. It feels a bit forced at times, like a lifetime movie. Maybe not as genuine as it could have been.

Wow, top 5, that's pretty high. I would agree though, I felt like I was watching a real life story unfold. Rabbit Hole was different than I expected, I liked Blue Valentine better.

I can't wait to see Blue Valentine. I have high hopes for it.