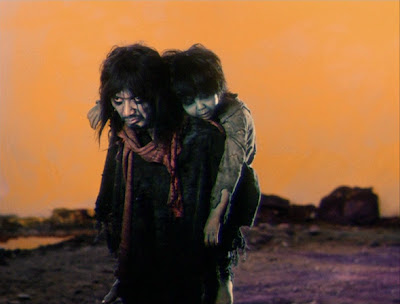 Kurosawa made Red Beard in 1965, which was a massive critical and financial success. At the end of 1965, it was in fact Japan's highest grossing film, but for many reasons, Kurosawa would not finish another film for 5 years and would enter into the darkest period of his career. Kurosawa suddenly had a difficult time getting funded for his projects, as they were usually expensive endeavors. So, he turned to Hollywood and became involved in the production of Tora! Tora! Tora! (1970) and was slated to direct the Japanese section of the story, but this turned into a huge debacle and Kurosawa left the film to work on something else. He decided to begin a new project, one which would not contain his longtime collaborative actor Toshiro Mifune. It would also be in color, something that Kurosawa had never used before. This film would be shot in only 9 weeks and would go on to be one of his biggest box-office failures. During the following year after the film's release, after health and mental problems, Kurosawa attempted suicide. He would miraculously recover and would go on to have a late bloom to his career. But this central film to this difficult period in his life is one that cannot be easily digested or ignored. It is Dodes'ka-den. 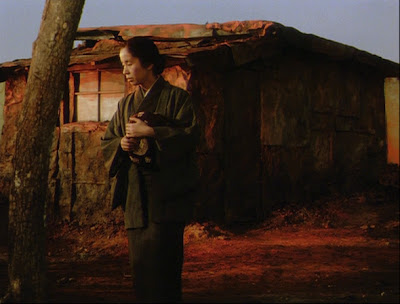 Kurosawa’s Dodes’ka-den is the darkest film of his that I’ve seen and I can’t quite think of a close second, although I Live in Fear (1955) might be a candidate. Here, the story is boiling over with sadness and regret, abuse and social impotence, addiction and all manner of sadness and injustice. This is the closest that Kurosawa ever came to Bergman-esque territory. Kurosawa’s story revolves around a ragtag assemblage of people living in a garbage dump. There is a boy with mental development issues, who pretends he is a trolley driver and runs around the dump all day making noises mimicking a trolley. There is a girl who lives with her abusive uncle who works her night and day tying flowers together to make a living. Another thread follows two very poor individuals, a man and boy living in an abandoned car barely scraping by, begging for food at restaurants. Several other stories are told as well, involving infidelity between a man and wife, an attempted suicide by a man at the end of his rope, among many others. All of this is very dark and the depressing atmosphere is truly enveloping. Life is cruel in Dodes’ka-den. 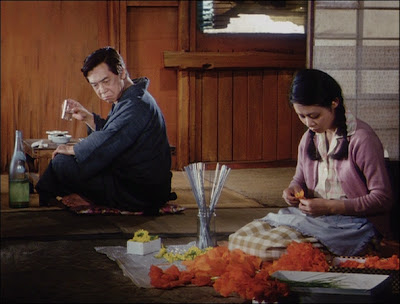 In perhaps the most compelling moment in the film, the man and boy who live in the car become food poisoned and are subject to intense stomach pains and sickness. One can almost feel the pain and suffering they are going through. Even the color of their faces takes on a surreal green pall to it. This is due to the makeup, but also the lighting, which strikes at odd angles and bathes them in this repulsive green color. Kurosawa makes excellent and continued use of color at fascinating moments, highlighting the toxic environment these people live in with neon colors, both in the clothing palette but also in the background colors. The sunlight glows with an otherworldly orange-yellow at times and swirls of color appear in the background as if out of a Van Gogh painting. These moments are beautiful and memorable both for their expressiveness and surreal qualities. It's amazing that it took Kurosawa so long to use color in his films, but his use of color here is one of the film's most striking and memorable aspects. 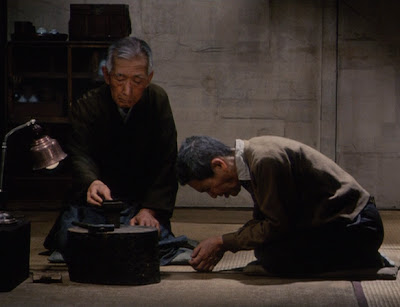 All the stories have very dark elements that are punctuated at times by slight attempts at grace or persistence in the face of adversity. However, there generally is an endless cycle of disappointment and heartache at the center of these stories. These people can’t rise above their ramshackle dump and move themselves out of it, precisely because they can’t bring conclusion to their internal emotional and psychological suffering. They persist and subsist because they can’t bring themselves to do anything else. It’s hard to say whether Kurosawa is calling this a noble venture or not. This is the question at the heart of one of Kurosawa’s most challenging and rewarding films: is life worth living under these circumstances? He wouldn’t make another film for five more years, and following his suicide attempt it would take a special project to get him going again. His Dersu Uzala (1975) is essential viewing following Dodes’ka-den in that it portrays a healing, humanity, and companionship that is in direct contrast to the continued suffering and struggle in Dodes’ka-den. These two films together constitute the psychological breakdown and recovery of one of the true masters of cinema.

quality review of a film i had no idea existed. i do enjoy kurosawa films but much like all important films i hesitate to watch.

Thanks for commenting. This Kurosawa film is probably more of a departure for him than his usual films. It kind of depends on the mood you're in too. It's definitely long so be prepared to settle in if you decide to watch it.

I remember seeing this when it came out and finding my center again in remembering the sound of the trolley from which the title comes. The pathos of the film is almost unbearable at times, yet I felt invigorated that these lives were given a voice. I have talked up this film to everyone I know ever since. Thanks for giving it an airing.

Thanks for your moving comments and for stopping by. Glad to hear you have enjoyed it as well. I found it cathartic as you mentioned, even though there is so much suffering in it. It just might be Kurosawa's most underrated and forgotten gem.

Again you have blessed the film community with a fabulous review of a work considered essential by most. I will admit this is not one of my favorite Kurosawas by any means, though I own the Criterion DVD, and have viewed it several times to confirm my original feelings. The pop-artish, psychedelic look of teh film is striking for sure, and a formidable first foray into color by teh director, but the depressing story is emotionally distancing and disjointed. I appreciate the fantastic analytical essay and the interesting idea connecting the film to DERSU URZALA, a film I like quite a bit.

I always found the suicide attempt (based on depression over the film's indifference reaction among critics) as over-the-top, especially since stellar reviews greeted most of Kurosawa's films. But there's admittedly much more than a bad reception that contributed to this relapse.

Thanks for the comments and I understand your perspective. It's a difficult film for sure, but I found it to be quite absorbing and penetrating. If you find it to be distancing and disjointed, it could be very well what Kurosawa was intending. However I was pulled in to it rather than pushed away. I think it definitely pairs nicely with Dersu Uzala in terms of how it contrasts the portrayal of humanity and grace. Thanks again.

David thanks for stopping by. Yes I think it's a great film. Please stop by again!

“Dodes’kaden” by Akira Kurosawa (1970) depicts and examines the conditions of life and of the human soul in today’s urban civilization. Kurosawa is not too interested in the polished city individuals monotonously rushing for work and back and living an artificial life of prescribed goals and standardized interests and tastes. Real heroes of DDSKD are semi-homeless paupers living on the giant dump in surrealistic decorations instead of houses, with a background of, as if, expressionistic painting. By these aesthetic analogies between the given and the created Kurosawa emphasizes a surrealistic condition of people’s life and expressionistic condition of their imagination. People’s way of life and their feelings, described in DDSKD, reflect the basic psychological archetypes constituting the existential legacy of humankind. Each character represents a certain anthropological model of life and certain way of the perception of the world.

Kurosawa questions the expediency of technological orientation of today’s civilization which condemns human life to fruitless nomadism and neurotic restlessness and makes human dreams escapist and mentally disturbed. It is as if human beings, instead of learning how to live and how to improve the conditions of their lives, tried to avoid real life through pursuing mirages and vain and absurd goals. Question of being becomes a question of how to detour being. Real problems of human life are systematically put aside, postponed into future and never resolved and, as a result, they crystallized into morbid but majestically narcissistic characters of DDSKD living their lives amidst picturesque garbage on a waste land. It is human history itself (together with human nature) that has become the waste product of a sterile world of urbanistic post-modernism.

DDSKD, Kurosawa’s first color film, starts and ends with multicolored drawings of streetcars – the favorite occupation of children of various nations, which are so unnaturally bright in the moving lights of street traffic that it is as if all the importance, all substance of life has gone to these drawings, leaving people depressed, apathetic, senile, abandoned, wretched, tragically comic, irresistible and unforgettable.

The film provides an elaborate criticism of Western and Eastern cultural traditions in which rational and superstitious and prejudicial ingredients are fused together and together in one decide the destiny of humankind.

The music of Toru Takemitsu is so expressive and so “Dodes’kaden” that, paradoxically, it has its own independent value from the film and makes the composer an equal partner of the revered auteur Kurosawa in his creation of this exceptional work of art. The acting is simultaneously realistic and epic, emotionally involving and scholarly articulate.