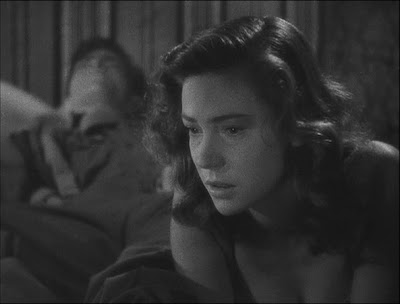 Burgeoning out of the tremendously harsh economic and social period following World War II, Italian neorealism was a vital movement screaming to be heard. Giving voice to the people, it was a way to convey stories of the suffering and injustice facing Italians during and following the war. Amazingly, through the use of mostly non-professional actors the movement maintains a vital freshness and poeticism to this day. Roberto Rossellini, along with Vittorio De Sica made probably the best films of the movement, each grabbing the audience through humanistic portrayals and vital truth, infusing stories with a yearning for justice and grace under harsh conditions. Rossellini’s Paisan is the 2nd installment of his War Trilogy coming between his equally important works, Rome Open City (1945) and Germany Year Zero (1948). Paisan is a wonderful distillation of a collective yearning for understanding and reflection on war’s scope and effect on people. 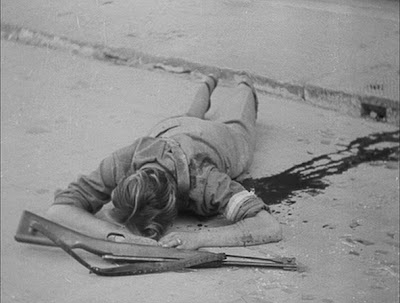 Six short stories are presented over the 120 minutes of the film and they all deal directly with war’s effects- psychological, physical, environmental, economical, spiritual etc. The film is set during the year of ’s liberation from German occupancy. In the first episode, a group of GIs attain the assistance of a teenage girl to help them navigate some difficult terrain. A beautiful moment of attempted communication and understanding between a GI and the girl is undercut by the cruel insistence of violence. In the third episode, a GI in is so disenchanted and fed up with the economic and relational difficulties of the city that he doesn’t realize the same woman he fell in love with and lost track of 6 months prior, is the woman who picks him up on the street. Love, in this case, is thwarted by ennui and mental paralysis. In perhaps the most tragic sequence, episode 6, a few GIs are behind enemy lines trying to support the partisans in defeating the Germans. Their futile attacks on the enemy, coupled with the deaths of some local family members are incredibly haunting, leaving only a screaming child on the roadside wandering among dead bodies. 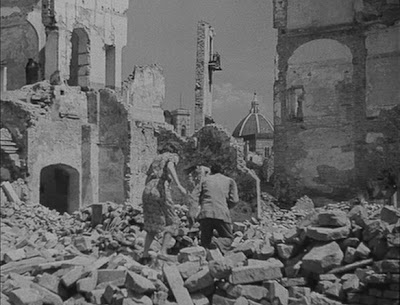 Although the film is in somewhat rough shape (although it used to be in much worse shape) and the dubbing is pretty far off, it does not impact the watchable quality of the film, nor the ability of the film to impact the audience. In fact, I think the scratched and rough quality of the film today only enhances the harshness of the stories and the difficulty in producing such a film on the streets and in the rubble. Rossellini’s insistence on using these natural locations and using mostly amateurs to wander these cities and locales makes the stories incredibly vital and heartpounding, mysterious and tragic. In fact, though the film presents 6 different episodes, they are remarkably connected and related, as the presentation covers all of Italy, from the south to the north, bringing the collective of a country and the terrors and hardships it faced to a full awareness. 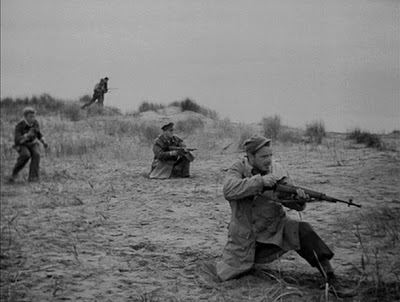 Continually, themes of miscommunication and the futility of understanding are underscored as GIs try to communicate with the local Italian people. Furthermore, love and family being thwarted or snuffed out by swift violence or mental ineptitude is another theme brought forward. Although Paisan is filled with deeply humanist perspectives and moments of shared beauty, the continual presence of injustice and violence, economic squalor and deprivation usually refutes any attempts of transcendence or joy. It’s hard to imagine the hardships facing the local Italian people of the time, but this film does a particular service in that it’s a forever reminder of the true cost of war, both for the soldier and the innocent bystander.
Posted by Jon at 1:16 PM

"Six short stories are presented over the 120 minutes of the film and they all deal directly with war’s effects- psychological, physical, environmental, economical, spiritual etc."

John, reading and commenting on your very fine review here after engaging with your masterpiece essay on Malick's TREE OF LIFE may be just a bit of a comedown (ha!) but everything is relative, and this is quite a penetrating look at a vital work of Italian neo-realism. It's not quite on a level with OPEN CITY nor with De Sica's masterpieces (THE BICYCLE THIEF, UMBERTO D, SHOESHINE) but it's a significant work that is essential for students of the movement or in Italian cinema. The film has always been in rough shape, but the Criterion release has it at it's best to this point. It's a most important film.

Hey again Sam! I understand what you mean about it not being quite on the same level as Open City or The Bicycle Thief, but in its own way, I was floored by this one with its range of emotions and the scope of the entire country brought to life. Open City is a much better made film with more continuity but I appreciated the raw and more improvised quality of this one.