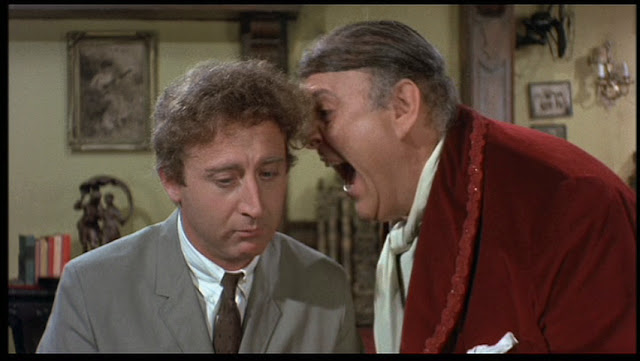 Note: This review of The Producers appears at Wonders in the Dark, as part of the Top 100 Comedies Countdown, placing at #21.


Mel Brooks became known as a spoof-artist (if spoofing can be considered art), but his first film is quite an original, and perhaps his funniest work because of it. Armed with an insane premise, a wacky set of characters and some great talent, Brooks made perhaps his best film, or at least very close to it. I must say that I had seen this film before about 10 years ago, but upon viewing it for the second time recently I found it even funnier. In fact, as far as belly laughs go, this film ranks right up there with the greatest comedies of them all. It's a non-stop, heaping dose of insanity. It also contains the first real extended performance (not counting Bonnie and Clyde) from Gene Wilder who would become a comedic icon and one of the essential comedians of his era. 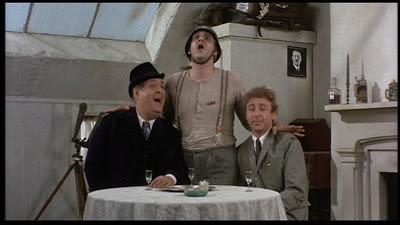 The Producers stars Zero Mostel as Max Bialystock, a conniving Broadway producer, who woos a small armada of little old ladies in order to drum up cash to fund his productions. When Leo Bloom (Gene Wilder), shows up at Max’s office to check the books, he finds out that Max has been doing some “creative accounting”. In order to avoid legal trouble, Max decides to bribe Leo into a scheme which will make both of them rich. They will produce the worst play that they can possibly come up with (which they believe will close within the first few days of opening) and they will fund their play with money from the “little old ladies”. The play they choose, is a tribute to Hitler and Nazi Germany, called “Springtime for Hitler”, written by a former Nazi named Franz Liebkind (Kenneth Mars), who is whacked out of his gourd and living in NYC in a highrise apartment where he talks to his pigeons on the roof. They presume that the play will crash and that they will abscond with the money and fly to . That is of course assuming that the play fails (Dun Dun Dun!!!). 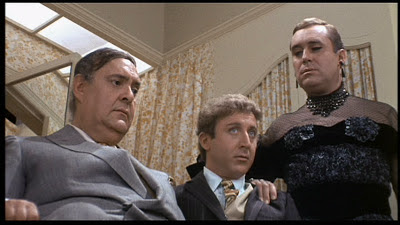 The first 15-20 minutes of the film in Max’s office are downright hilarious and I find that I cannot stop laughing. Leo shows up while Max is “making love” to one of the old women. Max’s pleas to Bloom once he finds out what Max has been doing is hilarious……as Max yells “HELLLLLLLLLLLLLLLP!!!” right in Bloom’s ear! Another running gag surfaces in the early part of the film when Bloom takes out his little blue security blanket and Max takes it from him. Of course Bloom throws a tantrum and Wilder’s antics are just hilarious. Another section of this sequence is when Bloom's hysterics get out of control. One of my favorite lines comes from this part of the film when Max throws some water at Bloom and slaps him.

In fact, what's better than to just watch that scene. It makes me laugh everytime I see it.

There are so many funny moments in this film though: the scene when Max and Bloom go to visit Franz Liebkind for the first time and he’s on the roof of an apartment complex wearing a Nazi helmet and talking with his pigeons; the scene where Max and Bloom go to find the worst director they can think of and it’s a cross dressing man named Roger de Bris (a hilarious Christopher Hewitt); of course the piece-de-resistance- the actual “Springtime for Hitler” musical number, which is totally outrageous and wildly inappropriate, but great comedy. This spectacular number is so insane because it's such a wonderfully awful song and dance presentation that is presented with such gusto! We are shocked as much as we are laughing. There's something about this sequence that even today is crude and I think it's to Brooks's credit that he was able to execute a scene with such poor taste that it has stood the test of time.....and still feels like poor taste (at least to my eyes). 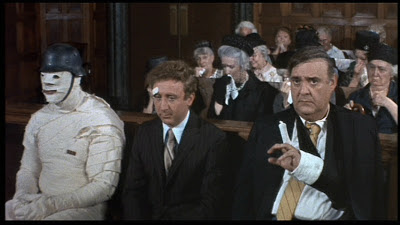 When the film was released, it was only 23 years after the war ended. The use of Jewish characters and the lampooning of Nazi Germany was a regular occurence in the early 1940's......The Three Stooges, Charlie Chaplin and Ernst Lubitsch all used comedy to highlight Nazi persecution and voice their displeasure through enlightened laughter. But there are relatively no comedies involving Nazis or Hitler from 1942 through the next couple decades. It can probably be assumed that once the full extent of the Holocaust came to light, there wasn't anyone who could have gotten away with a Nazi comedy at that time. Although there are bits of comedy thrown into Stalag 17 (1953) and The Great Escape (1963), it is probably the CBS TV show Hogan's Heroes, that can be credited with bringing back the ability to mock and poke fun at Nazis. This relatively benign show, which aired between 1965-1971, probably paved the way for Brooks' film by allowing the POW camp inmates to continually outwit their bumbling Nazi guards. Now The Producers is far more edgy than Hogan's Heroes was. Of course comedy has and always will have some degree of edginess to it. I'm not so sure Brooks was ever this edgy again (although the repeated use of the N-word in Blazing Saddles does come to mind). It's just really interesting to me that The Producers got made in the first place. Now I know comedy can get a bit more leniency when it comes to controversial subject matter....because it's comedy and of course comedy isn't so "serious" about things. 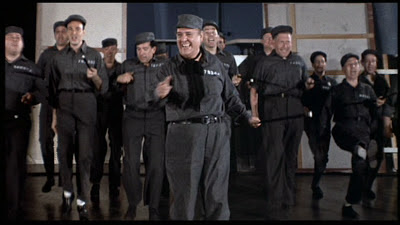 What strikes me most about this film though, is Gene Wilder and Zero Mostel. They are so funny, and they have such terrific chemistry together that it’s hard not to be somewhat in awe of their rapport. Mostel constantly has this wild-eyed look on his face, like he has just struck gold. I think Wilder went on to have some more memorable roles, particularly in another Brooks masterpiece, Young Frankenstein (1974). But, his work here feels more improvised and completely unhinged. He constantly seems on the edge of either hysterics, tears, or laughter. Additionally, Mel Brooks’s brilliant script is loaded with plenty of propulsion and enough zingers for 2 or 3 movies put together. This one is a real gem and one of the downright funniest films ever made.
Posted by Jon at 7:00 AM

Email ThisBlogThis!Share to TwitterShare to FacebookShare to Pinterest
Labels: Mel Brooks, The Producers