Note: This review appears at Wonders in the Dark, as part of their Top 100 comedies countdown, placing at #28. 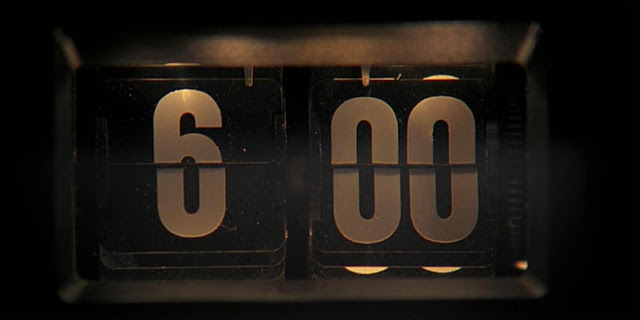 Groundhog Day was the summative collaboration between Harold Ramis and Bill Murray that spanned 6 films. Ramis wrote and or directed for several of Bill Murray’s best and most loved early outputs, from the gross-out classics Meatballs, Caddyshack, and Stripes, to slightly more "intelligent" fare like Ghostbusters, but it was with Groundhog Day that a certain key balance was found, eliminating most of the petty and stupid and swapping in the thoughtful, the existential, and the bittersweet. That’s not to say that this film isn’t funny, cause it’s absolutely hilarious. But it’s also something else…..a parable, a morality play, an examination of our humanity. 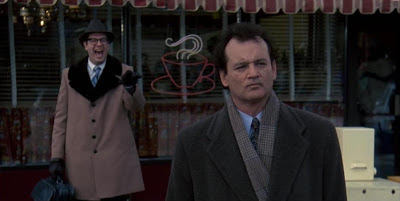 Unless you’ve lived in solitary confinement for the last twenty years, you already know this film well, and for some of you, you know it by heart. Bill Murray plays Phil Connors, a TV news weatherman based out of Pittsburgh who is slated to cover the festivities of Groundhog Day, Feb. 2, in Punxsutawney, PA. He travels via news van with his new producer Rita (Andie McDowell), and his cameraman Larry (Chris Elliott). It does not take long for us to realize what a smug, and arrogant man is Phil Connors. From his constant putdowns of Rita and Larry, to his complaining about the trip, to his hitting on Rita, to his sarcastic coverage of the event itself, it is clear that he has alienated himself from others to the point of no-return. Always on the lookout for himself, his day is one big me-fest. After covering the event, the crew tries to return to Pittsburgh, but is halted by a blizzard (which of course Phil failed to predict), forcing Phil, Rita, and Larry to return to Punxsutawney for another night. Phil wakes up the next morning at the B&B where he’s staying and finds that it’s Groundhog Day, Feb. 2 all over again. This occurs the day after…..and the day after…..and again…..and again. Feb. 2, Feb. 2, Feb. 2…….. 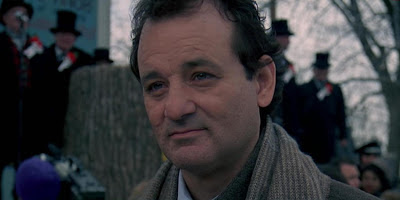 Phil Connors is stuck in some kind of pseudo timewarp and the entire scenario has an interesting set of rules that the film lays out for us. For one thing, people are in certain places at the same time each day, and the entire day repeats itself so that if Phil wants to do the same things and be at the same places, the day will be exactly the same each time. However, Phil also has the ability to do new things with each day and approach each day differently if he so chooses, meaning he can alter the course of each day, but cannot affect the time warp in which he is stuck. He can stay in bed all day if he likes; he can skip the Groundhog coverage if he so chooses; he can park himself in the diner and consume massive quantities of food. He can also carry memories from one day to the next, while everyone else starts over with no memory that the day is being repeated. This is partly what makes this film so funny. It’s the way that we see the differences from one day to the next, almost like seeing multiple takes of the same scene being done over and over again. Phil encounters several people at the beginning of each day…..the fat man at the top of the stairs at the B&B, Mrs. Lancaster the B&B proprietor in the dining area (“Do you ever have déjà vu Mrs. Lancaster?” “I don’t think so but I’ll check with the kitchen”), the homeless man on the street, Ned Ryerson- insurance salesman and former high school classmate on the sidewalk (“Watch out for that first step! It’s a doooooozy”). Each day Phil's interaction with them is slightly different as Phil’s consciousness of the repetition takes hold. It’s our understanding of what has happened before combined with what is happening “now” that is so funny.

When you get right down to it, Phil is essentially the only one in existence. He has a memory and a consciousness that each day is being relived. He can take memories and experiences from one day and apply them to the next. But no one else can. This is both why the film is so funny, but also why it can be pitifully sad. In one of the film’s best examinations of Phil’s state, we see a series of days strung together whereby Phil tries to court Rita by learning all of her likes and dislikes, trying to create the perfect day whereby he can go to bed with her. Try as he might, he is never quite able to do it as his attempts to play for self-gain constantly find him out. He’s not fully sympathetic for the whole film, but there comes a time when I begin to root for Phil and really like him and perhaps this has more to do with Murray than anything else. I honestly can’t think of another comedic actor who would have been able to make this role work so well. Murray goes through an amazing myriad of moods throughout the film, from arrogance, to bewilderment, to frustration, to embracing of the carefree, to romantic optimism, to hopeless suicidal despair, to a determination to make a difference in the lives of others and embrace each day as it comes. All of these changes occur through subtle changes in Murray’s tone and demeanor. It’s really a remarkable performance and is probably the genesis of Murray’s later career as a more existential comedic actor. I think there is a clear progression from Groundhog Day to his work in films like Rushmore, Lost in Translation, The Life Aquatic, and Broken Flowers, all of which are films born of a certain balance between the sarcastic, the deadpan, and the melancholy. 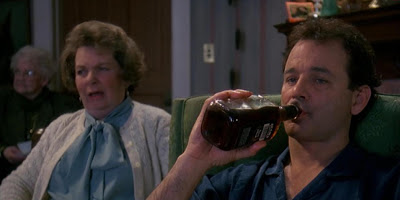 What separates Groundhog Day from similar works like Dickens' A Christmas Carol, or Capra's It's a Wonderful Life, is the fact that we have no idea who or what is controlling this exiled existence. It could be God, it could be the Devil, it simply could be fate itself that has dealt Phil this maniacal blow. We simply understand that Phil’s comeuppance is due. I think this element of not fully knowing who has caused this or why this is happening is central to the film’s success. There is a deep examination of emptiness and of nothingness, of depression and pointlessness and Godlessness. I think the film can tend to have a lightweight exterior, but I think it’s just beneath this where the real depth of this film lies. It is not until after Phil goes through the state of suicidal obsession, does he begin to come around, to try and find any semblance of purpose out of his predicament, to find a point to his existence. Also, for many interpreting this film along spiritual lines, there is really no talk of God, outside of Phil himself articulating that he is a god. Spirituality never comes up as a theme. This is a film about humans and their interactions with each other. In a sense, Phil has broken off from humanity and has been set on an island….alone…..to think about himself and his place and his emptiness and loneliness. His goal is to get back to the mainland and his journey back requires him to profoundly change his behavior and his outlook. 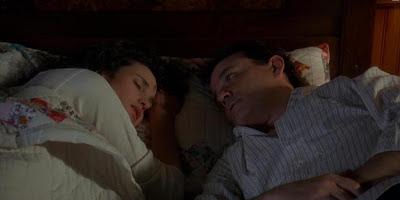 It is debatable, but one of the most interesting discussion points of this film is just exactly how long is Phil stuck in Feb. 2? It could be argued that in order to know the life story of everyone in the diner, and to memorize every Jeopardy answer for the episode that day, it would take some time. However to be able to go from complete novice on the piano, to being able to play piano at the blues concert he leads at the end of the film, it could be argued that he spends many, many years in the time warp. What gets him out of the timewarp is of course that he embraces each day and puts others first. This is after he has resigned himself to making the best of each day as it comes, and this is something that applies to humanity at its core. Call it lame if you want, but I think the film makes you take stock of yourself. Do you take each day as an opportunity to make a difference? Do you even care what happens today? These are the questions the film makes me think about. I’m laughing my way through the film, but the questions gnawing at my brain are there too. Yes it’s funny and goofy and silly at times, but there is so much to chew on, perhaps even more than a film like this deserves to have. When you try to boil it down like that, I think the film becomes perhaps preachy. It's best not to over-analyze it I think. The film is best experienced and watched multiple times and taken as you see it. I’ve been saying lately that there are great films that happen to be funny, and there are really funny films that happen to be great. This one just happens to be both.
Posted by Jon at 7:00 AM

See, I always thought it was the groundhog that controlled the days...

What an interesting surprise to find here, you do this from time to time and still it surprises me.

This is one of those movies I am no longer allowed to watch because of Leah. She just can't get past her dislike for Andie MacDowell and so I have been saved from overwatching and instead for me it will always have pleasant memories of humour tinged with sadness, despair told with laughter and Bill Murray at his best.

What a fine comment Toby! You will just have to watch it by yourself. ;) Interesting thought about the Groundhog! I never thought that it could be IT that's doing it. My my.

Jon! Greatest thing ever, Leah took me to see Groundhog Day at the local Rooftop Cinema on Boxing day. Andie MacDowell really isn't all that talented but so much fun to finally be allowed to see this film again.

Haha Toby you're funny. I'm glad she came around! ;)

I liked your review. I just finished watching the film and even though the film is full of humorous bits, i ended up feeling kind of sad because of the situation of the people in town.

Phil had to be everywhere everyday to save the lives of the kid in the tree, the fat guy in the restaurant and most importantly the bum. I think one of the lessons besides helping each other and stopping being selfish is acceptance. At the end Phil is no longer trying to change the fate of some people, but making them as happy as he could.

Sorry about my english.