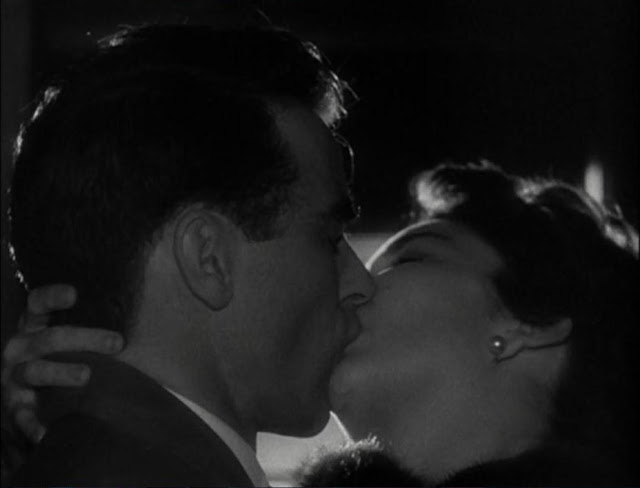 It would be really easy to dismiss De Sica’s and producer David O. Selznick’s famously troubled film as a complete and utter failure. It was butchered by Selznick and the studio from its original 89 minute version following audience previews, and without De Sica’s permission, cut and released at an unbelievably short 63 minutes. This cut was released to U.S. audiences and titled Indiscretion of an American Wife, which not only excised many of the smaller details that the Neorealist movement loved to explore, but it also gave the film a title that is just an awkward mouthful and really doesn’t do justice to the examined state of the two leads in the film.  It’s not just an indiscretion on display, it is a full-on passion play, examining a woman’s temptation to leave everything, her entire existence behind for the sake of her heart’s desire, and an examination of a man who realizes that his soul mate has already been claimed by another. The Selznick cut fared badly upon release. De Sica’s full cut, is another thing altogether. Originally titled Terminal Station (Stazione Termini), it is a quivering and overheated romantic melodrama combining the best elements of Hollywood and Neorealism, creating an achingly passionate film. 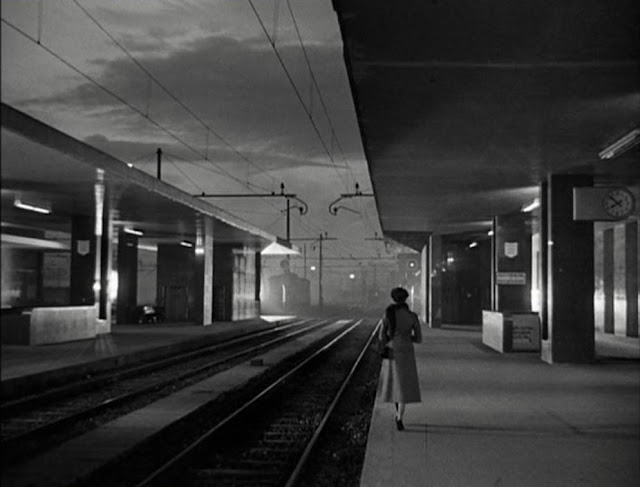 De Sica’s film had several writers involved in the script, but amazingly the film’s structure is very simple indeed. Mary (Jennifer Jones) is a married American woman who has traveled to Italy to visit her sister. She has traveled by herself and left her husband and 7 year-old daughter at home in the states. We meet her as she is prepping to catch a train at Rome’s Stazione Termini to leave for Milan and then on to Paris where she will return home by plane. She arrives at an apartment door, fails to knock and returns to the street, heads to the station, attempts to write a telegram and gives up. We quickly find out she has been involved in a passionate and all-consuming affair with a man named Giovanni (Montgomery Clift). She boards a train, but sees Giovanni on the platform and suddenly leaves the train, staying with him at the station while she plans on taking the next train to Paris which leaves in less than two hours. Thus the film then plays out in real time, with Mary and Giovanni dealing with decisions they’ve made over the last month. The suspense and melodrama ratchet up as Mary continually fights her own conscience as she struggles to reconcile and reason her way through any scenario in which would allow her to be able to be a responsible mother and wife and also maintain her passionate love for Giovanni. In her eyes, she must choose between one or the other. 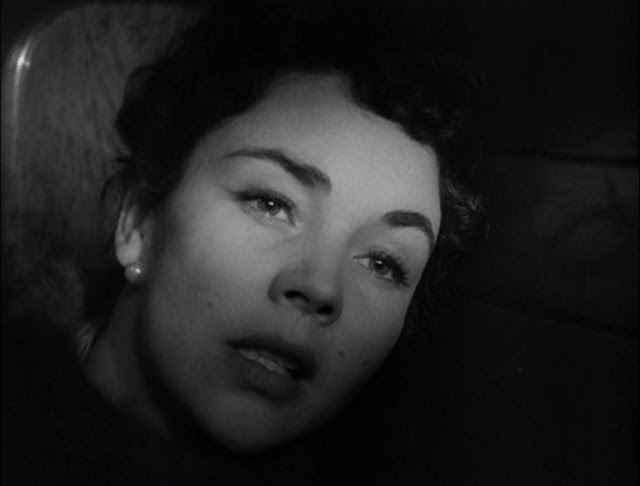 Mary’s heart wants her to stay in Rome with Giovanni and thus everything grinds to a halt as she gets off that first train and remains stuck in the train station with Giovanni. During the time in the station with him, she tries to make herself listen to her head. She reminds herself of her daughter as she helps out a pregnant woman with 3 kids as she takes her to the nurse’s office. She reminds herself of the promise she made to her husband to always be a family and be there for her daughter. She even uses the run-ins with her nephew Paul (Richard Beymer) in the station to keep herself pointed to her family. As long as Paul is there, he will make her listen to her head and not her heart. This film has some kinship with Lean’s Brief Encounter, especially as it deals with the female lead character and the struggles of her responsibility to her home life contrasted with the passionate needs of her heart. However, in Lean’s film, the relationship remains unconsummated. Here, it is rather clear that Mary and Giovanni have already had sex. 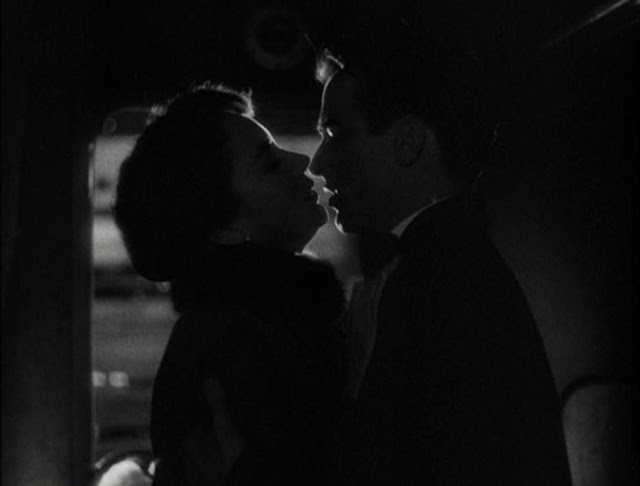 De Sica’s instincts, especially in the longer cut of the film to provide key atmospheric elements, like the surrounding peripheral characters, particularly the ill mother and the Paul character provide key psychological signposts for Mary. In addition, the scene where she attempts to write her lover a farewell telegram is particularly well-drawn, as she can’t even bring herself to quite put her feelings down on paper, as if admitting such a thing to the man behind the counter would acknowledge her mistakes too personally for her to be comfortable. I’ve been in Rome’s Stazione Termini, and it was somewhat comforting to learn that the place hasn’t really changed that much in my eyes in the last 60 years. Much of the terminal appears the same to me today and of course filming on location was an essential element of the Neorealist movement to begin with. De Sica’s focus on emotional purity and realism is extremely effective, especially as he pairs it with the soft-focus glamour shots more reminiscent of Hollywood films. It’s an interesting dichotomy but really works in a film of this stature with leads stars like Clift and Jones. Clift was in his prime at this point, playing sensitive characters with ease as well as characters slightly manipulative and needy like this Giovanni. His role is the less elemental of the two, as the point of view is mainly from Mary’s perspective, though. Jennifer Jones is fantastically believable as a woman who hasn’t felt sexual passion in many years (or perhaps ever), who found herself caught up in something she never imagined would go this far. Her expressive eyes and aching femininity were rarely on display more fully than in this film. De Sica’s camera loves her face, and there are a few close-ups here that really make one pine for the golden age of the Hollywood starlet. The black-and-white cinematography is indeed beautiful as the light plays off her face. I think Jones and Clift make a terrific couple in this film, making me believe that they are sexually compelled to one another, if also sometimes disconnected on an emotional level, as her head is often somewhere else. They are at unequal levels as far as potential consequences of the affair go. Most of the burden is in fact on Mary’s shoulders, with any fall-out affecting more lives in her case than in Giovanni’s. 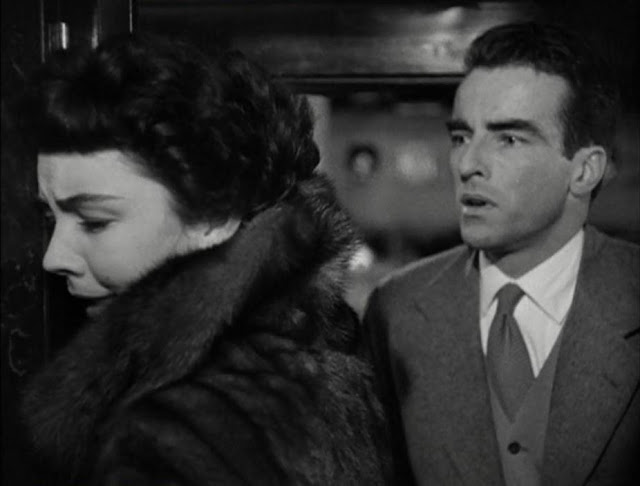 The film’s fantastic centerpiece is the scene where Giovanni and Mary steal away into a dark and empty train car. This scene is the best and most intense sequence in the film. Their kiss and embrace is framed terrifically in shadow and light, outlining their figures. It is a scene of almost uncomfortable intimacy, as if we as the audience should not even be witnessing it. Their union is interrupted as the police find them and take them to the police commissioner who is about to press charges when he realizes he has an opportunity to play moral judge upon Mary and Giovanni. The commissioner gives her an out if she tells him she will get on the next train. It is at this moment, she is finally able to listen to her head and the film then proceeds onward toward its fateful and emotional conclusion.  Yes the film has a tendency toward floridity and protracted melodrama, but for my money, the emotional clarity and honest character examination is fantastically romantic and observant. It is one of cinema’s great, tragic romances.
Posted by Jon at 6:00 PM

This was a fantastic review; I'd never had much interest in this film but you've definitely caught my attention. The idea of a movie combining Neorealism and Classic Hollywood is pretty fascinating, especially with the lure of Jones and Cliff. I will make sure to check this one out.

Hi Rachel! Thanks for stopping by and for your comment. I'm very flattered that I've caught your attention and I do hope you seek it out. As I mentioned, this longer cut is the better of the two, and both of them are on the Criterion release. I think you will like it. It's just terrific and romantic and emotional. Loved it.

That's about right Jon, and this is a terrific review of an often neglected De Sica work, understandable when one considers his three incomparable early masterpieces, BICYCLE THIEVES, UMBERTO D, and SHOESHINE will always stand in the hallowed halls of cinematic excellence. The psychological underpinnings in TERMINAL STATION are persuasive, and I complete agree with you on that great centerpiece.

Jon, fantastically well written with some penetrating analysis of Jones's character and her dilemma. I love de Sica--he's in my directors' pantheon--but I've never seen this, largely because of the negative things I've read about it. In fact until reading your post I didn't know that de Sica's longer version existed. You do make it sound appealing. I too was thinking of "Brief Encounter" while reading. Your suggestion that the film is a hybrid of realism and romance perhaps indicates that for de Sica this film represented a transition between his purely neorealist films and the more mainstream films he tended to make from the mid-50s on.

Thanks Sam. I do understand this one will never be mentioned in the same breath as those three you mentioned. I tend to believe this one is probably more in the forgotten classics category. It will never make the pantheon, but means something personal.

R.D.,
Thanks so much for your thoughts and encouragement. I put a lot into this review. This is a kind of personal work that you can tell De Sica really wanted to get right, but was hampered by studio meddling. Jones was married to Selznick at the time, so one could understand the trouble De Sica would have faced trying to make the film his way. Yes the film is available on the Criterion disc, including both cuts. You're probably right that it is that sort of transition film for him, with one foot on neorealism and other in more a Hollywood frame of mind. Thanks! I hope you check it out. It has a way of getting under your skin.

I sure have neglected this film to the point that I have never seen it... Maurizio Roca

Well Maurizio....this is an interesting film....even from the production angle. Jennifer Jones is wonderful here and the location shooting in the station is terrific.

Had never heard of this film, but discovered it on TCM today. An emotional and visual masterpiece. How awful it must have been for De Sica to have had Selznick second guessing him and mutilating his film. Terribly sad that Montgomery Clift such a low opinion of the finished film. Thank you for this review.