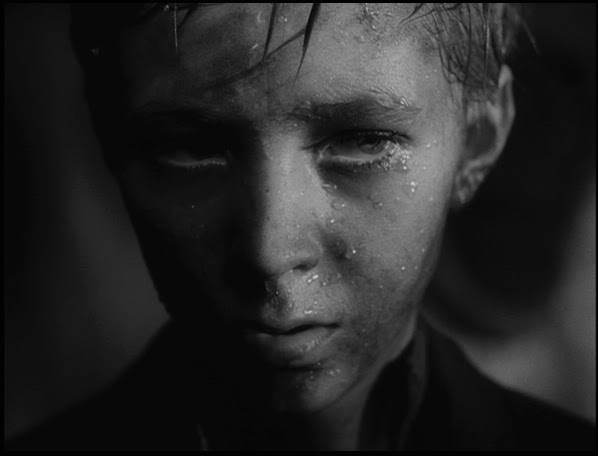 Ivan’s Childhood is a call to order. It is Tarkovsky’s first film and it’s also a film that quite remarkably, contains the blueprint for his career. Yes he would go on to produce more ambitious features, and more enigmatic ones, but it could be argued that the emotional, tactile, and visceral imagery of his feature debut would never be surpassed. His assured command of the physical/spiritual content and the way to connect psychological meaning through starkly beautiful imagery is intact from the beginning. This was my first viewing of this film and I must say I was completely floored by it. From beginning to end it is a penetrating visual experience that pulls you in under its spell and doesn’t let go. I am in love with this film. 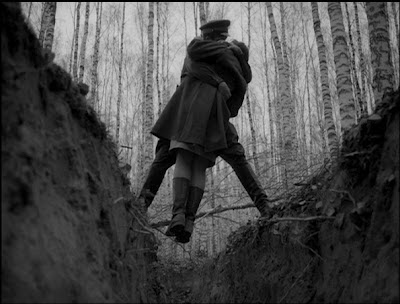 Ivan’s Childhood stars Nikolai Burlyayev as a 12 year-old Russian boy whose family has been killed and at the beginning of the film, we find out he had joined a partisan group and was trying to cross the front line to enter Soviet territory. He is captured by the Soviets, and quickly becomes ensconced into the war effort. He is jaded and rather stand-offish toward the officers, fitting right in it seems. He wants to stay on the front lines to embark upon reconnaissance missions, which he believes will be successful due to his small size. There is also a subplot involving an army nurse named Masha (Valentina Malyavina), and her burgeoning relationships with two soldiers. 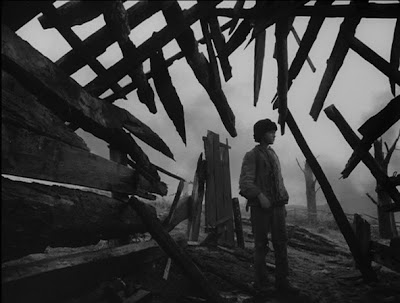 Part of the major appeal of this film lies in Tarkovsky’s method of telling the story with dream sequences interspersed. Ivan’s dreams/memories of his mother and other moments from his childhood prior to the war are deeply affecting and magnificently staged and photographed, as is the entire film. Vadim Yusov's cinematography is breathtaking and the fluid camerawork that Tarkovsky’s films would be known for is on display here. Of particular note is the “birch forest scene” where Masha and her lover walk amongst a forest of white birch trees. White and black contrast magnificently in this striking sequence. Also, Ivan’s sequence in the bunker by himself is an intense examination of shadow and light with some brilliant editing. Furthermore, the dream sequence on the apple cart, with the “film negative” background, ending with the horses eating apples on the beach might be the most beautiful sequence in the film.  Ivan’s trip across enemy lines in the boat through the flooded forest is an examination of low-light compositions, barren trees, and reflections. In the film’s chilling final act, the setpiece in among the ruins and ashes as the soldiers sift through prisoner documents is equally memorable. 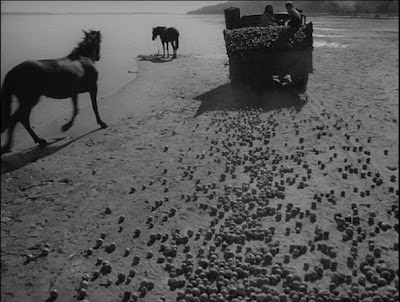 What also strikes me about this film is Tarkovsky’s ability to convey the altered state of mind as completely essential to the storytelling. These scenes are not just cinematic flourishes, but the means to an end that fully conveys the altered universe that war creates. He would examine state of mind, and literal and imagined parallel existences later in other films, but here it’s so elemental to the boy’s comprehension of survival that these dreams and sequences must be filmed with a heightened state of consciousness and imagery. The boy, and we as the audience, “feel” through the images. The images are the conveyance of emotion. The use of organic materials- trees, water etc.- give a tactile presence to the images. You can feel them with your hands just as you can feel the emotional connection they make to your head and heart. ’s war ravages the countryside and damages nature along with any connection to it, just as it damages people and their lives and their connections to each other in this story. This is not to say that acting is relegated to the background. Nikolai as the small boy is absolutely compelling and intense. Rare is the performance by a boy of this age that is able to project true independence and fortitude, as well as brokenness as he is here. Perhaps Hunter McCracken’s performance is equally potent in Malick’s Tree of Life (2011). Most memorable though, is Tarkovsky's vision, which is on full display in this masterpiece.
Posted by Jon at 7:00 PM

Jon, another great post. This is a film I've been aware of for a number of years but never got around to watching. I have seen some later films by Tarkovsky, though, and the way you describe "Ivan's Childhood" (when I first heard of it, the film was called "My Name Is Ivan") certainly supports your idea that it contains the germ of his later work. Your description in the third paragraph of those scenes from the film was magnificent. I especially like the way you dealt with Tarkovsky's use of dreams/memories/altered states of mind and how he made these part of Ivan's innocent and instinctual view of reality. From what I've seen of his work, Tarkovsky was one of the greatest visual magicians in all cinema. The way he was able to blend these complex narrative strategies (rather like the way modern novelists do) yet never get the viewer muddled is just amazing. Coincidentally, "Ivan's Childhood" has at last risen to the top of my Netflix queue, and I'll be watching it within a few days!

"Tarkovsky was one of the greatest visual magicians in all cinema." Yes this is a great statement and I totally agree. R.D. thanks for the great support and comments here. I was altogether rather floored by this film I must say and I hope that you have a good experience seeing it. It's just a beautiful work. Yes and Ivan's point of view is the key to letting the dreams work as narrative and not just cinematic flourishes. I think the film sometimes leaves his point of view at times and I know some are not so in love with those sections of the film. I enjoyed some of the diversions though and the film is so beautifully shot, I just couldn't complain about anything. Enjoy!!!

I am yet to explore this director, but it will be a while before I do. Great review! I'll check this one out.

Jon, you've penned a poetic piece of a film of deep emotional resonance and lyricism, a film that remains a work of art, and one that holds the viewer spellbound, and inspired, tangible feelings that are seemingly more tangible than what one would experience in the later more auspicious masterpieces. The film certainly has a thematic connection to Chukhray's BALLAD OF A SOLDIER, and in it's wrenching anti-war underpinnings with Klimov's powerful COME AND SEE. But you are quite right, methinks, to note the sensory qualities and the altered state of mind and the dream sequences. The last scene is unforgettable, and you are dead-on to credit Vadim Yusov's spectacular cinematography and the "birch forest scene."

great too, that you compare Nikolai's performance with that of Hunter McCracken's in THE TREE OF LIFE, especially since both films provocatively explore nature, religion and love.

Truly, one of your best and most passionate piece Jon. Terrific!

Thanks FilmMaster! Do check it out sooner than later!

Hi Sam!! Thanks very much for the comments. I have seen those other Russian films as well but it has been awhile. Actually there are several from this era about war, including The Cranes Are Flying as well. Yes that Birch Forest Scene is very beautiful stuff. I could watch that scene over and over.