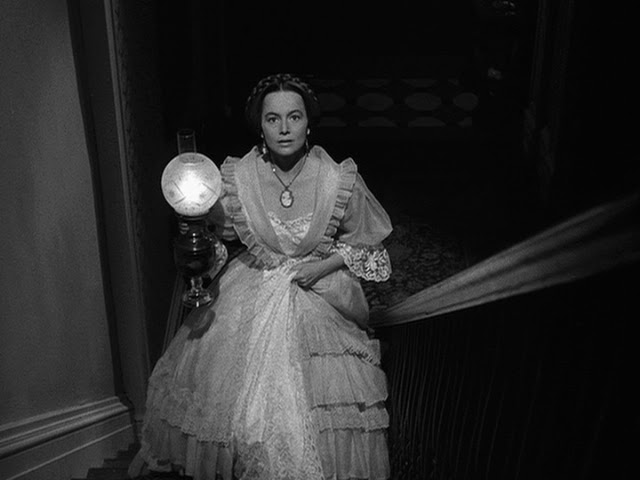 In William Wyler’s astute and pointed masterpiece, The Heiress, we find pleasure in what I would call the art of simplicity. Here we have a film that relies upon the foundation of a great script, solid dramatic acting, observant deep-focus cinematography, and a score that heightens the tension. I had never seen this film before until recently. I was aware of it’s status as a solid dramatic film from the 1940’s, and of Olivia de Havilland’s performance. What I wasn’t so prepared for was how solidly and assuredly the film is put together. Wyler has a great knack here for heightening dramatic effect through the observance of behavior within confined spaces. He essentially made a “chamber drama”, which Bergman in subsequent decades would perfect. Wyler allows the acting to develop through each scene, giving each actor time to create the moments within the scene, without cutting them short. 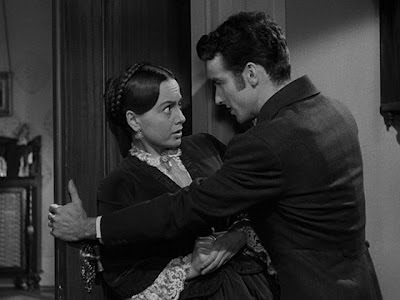 This film is based on the stageplay from 1947, which was based on the book, Washington Square by Henry James. Catherine Sloper (Olivia de Havilland) is a woman with very little experience in the matter of love or relationships with the opposite sex, but she possesses quite the inheritance from her deceased mother and also which will come from her father, Dr. Austin Sloper (Ralph Richardson), whom she lives with, along with her Aunt Lavinia (Miriam Hopkins). Catherine is starting to get some wrinkles around her eyes, and is past her prime for getting the attention of men. Her father is possessive of her and critical. Her aunt pressures her to try to meet people. They attend a dance party where Catherine meets a handsome younger man named Morris Townsend (Montgomery Clift). He pursues her rather heavily despite her shyness and timidity, soon proposing marriage to her. In the process of Morris asking Dr. Sloper for permission to marry, it’s clear that Dr. Sloper feels that Morris is only out to marry Catherine for her money, and threatens to withhold her inheritance. Catherine feels this is her only chance at marriage. Her father feels she is going to be robbed of her money and true love. 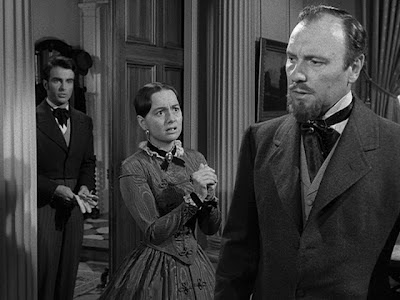 What I find so mesmerizing about the plot, is the fact that we really have no idea what Morris's intentions are. There are certain scenes where I am sure that he’s up to no good, and then there are other scenes where I’m sure that he is nothing but completely sincere in his love for Catherine. Clift plays the role magnificently, keeping us completely in the dark about his motives until we absolutely can’t stand the suspense any longer. His role is the key to making the chamber drama work. He is the one through which the plot engine churns. It’s his subtle nuances that count here most of all. I am also impressed by Olivia de Havilland, who is able to make me believe that she is the naïve, timid woman at the beginning of the film, and also the rather moody and direct woman she is at the end. Ralph Richardson is also terrifically curt, suspicious, and rather spiteful as the Dr., a man with deep-set flaws regarding his perfectionism and greed. Miriam Hopkins also provides a breezy counterpoint in several scenes that is most welcome here. 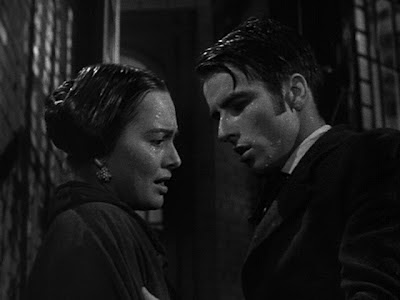 Deep-focus cinematography by Leo Tover is incredibly engaging and adds to the dramatic tension. I like the way that characters are framed in the classic dramatic triangle, with three people standing at different points within the frame, allowing us to see each one at the same time. Aaron Copland's score is also a tremendous asset to this film as well, adding the underpinnings and exclamation points to key moments. It’s the kind of score that doesn’t call too much attention to itself, but you notice that it’s working well with the film and enhancing it. In thinking about William Wyler’s ability to wring dramatic moments from his actors and focus on the drama of the scene (a la Dodsworth), I find a bit of a kinship with Sidney Lumet, who also got the best from his actors and from a focus on the essential elements of the film, a simplicity if you will. It’s something to think about anyway when we try to categorize Wyler. By any standard, though, The Heiress is one of the great pictures of the 1940’s and not to be missed.
Posted by Jon at 7:00 PM

"great script, solid dramatic acting, observant deep-focus cinematography, and a score that heightens the tension." The art of simplicity? If only--we would have a lot more masterpieces if that were the case. I think what you mean is how easy it is for the audience to see how excellent a movie is when all the elements are perfectly put together. To paraphrase Garance to Baptiste in Children of Paradise, "Love is really so simple."

And don't forget the contribution of the directer. All he needs is the judgment, the intelligence, the determination, the vision, and the know-how.He conducts and coordinates all the elements, major and minor.

Then excellence ensues. Easy (for us)

Esco 20,
What I mean about simplicity, is there is nothing excessive here that is not needed. Everything is essential and there is no overt embellishing. Yes of course Wyler deserves the credit for making this all hum together and maybe I mentioned this too subtly. Thanks for your comment!

R.D. Finch,
Thanks for your great comment! You are well versed in Wyler and this film I can tell. I did not know that tidbit about Scorsese but it's nice to know and makes sense. Yes I left out the ending as part of my essay and don't want to give away anything if someone hasn't seen it. However here I will say that yes de Havilland makes that moment very believable. Yes in today's age, she would not "need" someone, however, there is always the need or striving to connect it would seem. I do like the ambiguity remaining for the audience when it's over. We do not know for sure whether she's made a judicious decision or not.

Jon, I wasn't satisfied with the comment I left earlier, so I've replaced it. Your response, of course, now follows.

Jon, a tremendously well-written and observant post. Your first paragraph especially compressed a lot of great observations into a small number of words. I also liked the way you treated Wyler's way with the actors and his simple yet potent visualizations, also the contributions of cinematographer Tover. This is one of the best looking period films ever. I've read that its decor and photography were an influence on Scorsese when he made "The Age of Innocence" a number of years back.

You also mentioned two things that I think make "The Heiress" so great--the unbelievably high quality of the acting (de Havilland is matched by the peerless Richardson as her remote and controlling father) and the ever-present ambiguity of the plot, not only Morris's motivation but also Catherine's decision at the end. Of course, as you point out, they were working with material from a master of psychology and ambiguity, Henry James.

You must have gotten the idea by this point how much I like this movie--one of my two or three favorites by the great and prolific Wyler--and also your post about it.

I should have said, of course, that your response now PRECEDES my revised comment!

Haha R.D. Thanks again for your knowledge and support on this essential film.

With the upcoming William Wyler Festival at THE MOVIE PROJECTOR I am thrilled to see the master conductor himself, R.D. Finch, spearheading a memorable dress rehearsal. Jon, your trenchant examination of the film component by component brings this exceptional film into glowing focus, and you are so right in extolling the virtues of Olivia de Havilland's Oscar winning performance. The film of course is a beautifully mounted version of Henry James' WASHINGTON SQUARE, that features a superb turn from Ralph Richardson and a good one from Montgomery Clift. Aaron Copland's score is magnificent, and further proof of how this great classical composer was well-suited to film. His scores to THE RED PONY, OUR TOWN and OF MICE AND MEN are further proof. Unfortunately, Copland believed Wyler botched his score, and refused to do THE BIG COUNTRY, which wound up with one of the most sweeping scores in film history by Jerome Moross.

You are right on to mention Leo Tover's deep-focus photography as an acute stylistic to enhance the narrative tension.

A terrific review here for a terrific film!

Thanks Sam for your tremendous comments. I know you are very well versed in film scores and your anecdote on Copland is a fascinating one. Yes I am looking forward to participating in R.D. Finch's blogothon next month on Wyler and am prepping my essay as we speak!

Beautifully written essay on my favorite Wyler film. You are right--he knew how to let his actors act. deHavilland creates an unforgettable character arc from sweet innocence to bitter cynicism, Sir Ralph Richardson is perfectly supercilious, Miriam Hopkins is deliciously scene-stealing as the aunt, and Montgomery Clift is so much more complex than a mere hero or villain. Great script by Ruth & Augustus Goetz--I love movies with unsatisfying endings. Should she have taken him back at the end? I change my mind each time I see it.