Drawing the Line - The Girl with the Dragon Tattoo (2011) 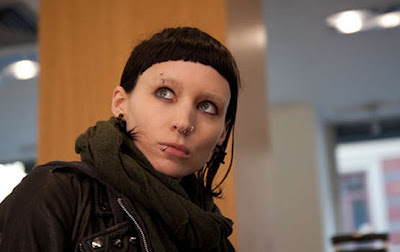 Well I thought I had seen my most hated film of 2011 already, which was Martha Marcy May Marlene. Then I saw The Girl with the Dragon Tattoo. This film is nothing but a despicable, desensitized meditation on degrading things like rape, torture, and grisly death with no substance behind it. I usually draw the line with rape, though. It is rare that a director is able to negotiate the minefield of such a topic and actually come through with a scene that doesn’t feel cheap and obscene. Those that were able to retain an ounce of respect for the moment and the viewer were perhaps Bergman (The Virgin Spring (1960)), DeSica (Two Women (1960)) or Bresson (Mouchette (1967)). But like I said, most rape scenes have little to no added value and in fact are offensive to me in the worst possible way. Perhaps the most egregious scene is in Peckinpah’s Straw Dogs (1971). The scene in The Girl with a Dragon Tattoo did not need to be filmed with the specific body movements, camera angles, noises, and other details involved. I thought the scene was completely over-the-top and unnecessarily offensive to women, and in turn, to me as a viewer. Rape is too often used as a cinematic device for effect. There are ways of conveying the devastation of rape without actually having to show all the details. David Fincher should be ashamed of himself for having filmed this scene in this way.

Furthermore, Fincher’s use of grisly murder photos, torture and other violent imagery also seemed to cross a line for me, as there was nothing behind it, like I mentioned. I think maybe it’s different if it’s filmed from a perspective of shock and horror, but here it’s presented so blankly. I didn’t find that these sequences added value to the story, nor to a proposed appreciation for the characters involved. It was just needless cinematic excess. Zodiac (2007) was a fine film, but I felt that the murder scenes were unnecessarily celebrative of the acts, as if the display of the sequences stood outside of the rest of the film. Did I really need to see the gory details? And who is the gore being displayed for? I didn’t go to see a slasher flick. What was the point there?

I know there is a debate about whether “Torture Porn” such as the Saw films, or The Human Centipede stuff, can be art. I’m usually fairly lenient regarding a definition of art, but I can safely tell you that this would be art I do not wish to see. I would argue though, that those films are made for a very specific audience wanting a very certain thing from them. Those viewers want the shock and spectacle of it perhaps? What irks me about The Girl with the Dragon Tattoo, and also about Martha Marcy May Marlene, is that they present themselves as Cinema, as Art House, as real filmmaking if you will. For me, if you’re going to throw in cheap cinematic devices, like rape and other degrading flourishes for shock effect, you better have a point and I just didn’t find it in these films at all. It’s one thing if you’re Pasolini, who may have made the must repugnant film of all time, Salo (1975). But he had a point and went in whole hog, right? Fincher is just cheaply using moments like the rape scene without seemingly any tact or respect or larger point for having filmed it that way. The Girl with the Dragon Tattoo is empty and meaningless and ugly. I’m sorry I watched it.
Posted by Jon at 8:27 PM

Email ThisBlogThis!Share to TwitterShare to FacebookShare to Pinterest
Labels: David Fincher, The Girl with the Dragon Tattoo

I came here to leave a comment under your MADAME DE review (which I will still do momentarily) but figured I'd stop in and let you know that I am likewise no fan of this over-the-top unpleasant film, for most of the reasons you cite. Ms. Mara is fine in the lead role, but she engages in some antics that seem purposefully overwrought. I was surprised at it's Oscar wins, and generally very good reviews, but as always everyone has their own artistic agenda and expectations. My nearly 16 year-old daughter Melanie absolutely loves the film, which makes me wince for obvious reasons. Your curt dismissal is one the mark my friend!

Thanks Sam for the comment. Yeah certainly everyone has a cup of tea, and this one certainly isn't mine! I am equally surprised by the generally very good reviews. Certainly isn't the first or last time that the general masses are or will be wrong. ;)

Martha Marcy May Marlene is a masterful film. How anyone who likes Bresson could fail to recognize that is beyond me.

How does its "presentation" of itself as "Cinema" or "Arthouse" differ from any other film's self-presentation? It is what it is--a superior work of craftsmanship, evocative, subtle, mesmerizing. To disregard that because you feel it exploits sexual violence is silly.

Rape is nasty. So are fist-fights and plugging people full of bullets. But to allow your concerns about it get in the way of evaluating the aesthetic value of a work is rather amateur. Such scruples are best reserved for the footnotes. I mean, kudos for being so morally evolved. We applaud your sensitivity. Now could be get on with talking about the film's merits?

While we're on the subject of rape, what did you think about Noe's Irreversible? How about a post dedicated to the best rape scenes evaluated in different categories (longest, most believable, best mounted, -framed, -edited, etc.?)It may help you separate moral from aesthetic [formal] dimensions.

And how about some screen-captures for Kapo?

Okay go ahead and talk about MMMM's merits....like what for instance? Like it's a complete hack job? Derivative of Polanski and Bertolucci? I don't even LIKE Bertolucci. This post was about Dragon Tattoo though. Fincher is one of the most overrated directors out there. He revels in vileness and never moved beyond his ability to remake Von Trier's The Element of Crime, which he continues to do over and over again. He does nothing original. Go ahead, lay out WHY these films are great.