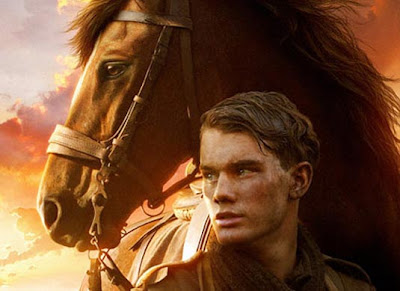 I like to think that movies of all kinds have the potential to be great in their own way if the cards are played right. Sure there are certain types of films that lend themselves the ability to be considered masterpieces because of their audacious approach. Take the sheer scope of Terrence Malick’s The Tree of Life (2011). He obviously shoots for the moon in most of his films and the sheer ambition and scope often lead to astounding results. It’s easier to “see” that films of artistic ambition are great. We point to the cinematography or the film’s concept or themes or color palette or unique editing style etc. It’s easy for critics and bloggers to point out what makes such a film great and one can read into it what one wants. There are other genres or films that of course tend to be less respected by the critical community and many of these are the types of films where the artistic sensibility seems less ambitious or unique. These types could include musicals, melodramas, or various forms of pure entertainment or even family entertainment. My point is, what do we do about films containing tried and true techniques to convey a story or films from genres such as these? Are they of lesser worth because of their type? How do we compare them to other films that are more technically ambitious? Often these films I speak of simply exist to convey a story in an effective way using techniques most appropriate to the story. This is not to say of course that films with “lesser” ambition and objectives are given a pass. In fact, they are often scrutinized even further as each component of the film must work in perfect harmony in order to be effective.
Thus, this is the context in which I must engage Steven Spielberg’s War Horse. Based on the novel from 1982 and the stageplay in 2007 of the same name, this film uses a horse, and the boy that loves him, to encircle the scope and impact of WWI, and to attempt to quantify the impact of this war by engaging in the discovery of humanity in the face of hellish adversity. However, it’s not a realistic or serious examination of the war. It plays more as a fable and mainly as moving family entertainment, using the war to highlight certain aspects of duty, humanity, and spirit in the face of odds, although heartwarming this film is not in my opinion. We meet an English boy, Albert as he sees a young foal born on a nearby farm. This foal is sold at an auction, where Albert’s father buys the horse, instead of the work horse he should buy to till the nearby field at their farm. Albert takes the horse, named Joey, under his wing with love and care, and teaches the horse to till the field against seemingly all odds for a horse of his stature. Sadness befalls this story as the boy must part with the horse, as it is sold to a Captain in the cavalry at the start of WWI to be his trusty steed. Joey ends up in the hands of some young German soldiers, and then winds up in the company of a young girl and her grandfather on a farm. He’s then taken by German soldiers again, eventually winding up between the trenches in no man’s land at the of the , leading to the moving centerpiece of the story and the film’s conclusion. 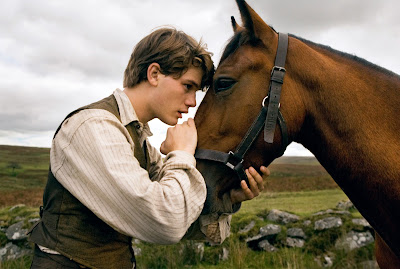 War Horse really fits in with Spielberg's overall oeuvre. This film is a fantasy of sorts, something that wouldn’t be uncomfortable sitting alongside E.T. (1983). Or even the fact that the film employs a structure hovering around chance and circumstance, which recalls his Saving Private Ryan (1998) in certain terms. I think above all, the film works mainly on the level that films of a bygone era did, even though it's not a strict homage. I’m thinking of mainly the films of John Ford, who tended to employ a spirit of rugged determination and morality along with an abiding feeling for sentiment and the effectiveness of combining these elements. Particularly, I recall How Green Was My Valley (1941) as I watched War Horse. There’s also of course the cinematic context of traditional family entertainment, like of National Velvet (1944) and The Black Stallion (1979). Additionally, films such as Random Harvest (1941), Sergeant York (1941) or even Mrs. Miniver (1942) are recalled in War Horse using the theme of humanity persevering at great odds whilst using sensitive, emotional filmmaking to convey the story. Above all, War Horse is simply a masterful and commanding telling of a moving story. It’s not about the cinematography, even though it’s great. It’s not about the film’s score or acting per se, even though they are uniformly wonderful throughout. It’s the story of the lives that the horse touches and the reminder that humanity is capable of persevering against all odds. That is how the film impacts me and it is a supremely moving film.
If there’s anything worth arguing over in the film, and this is I think the determining factor over how one perceives a structural component in the film, (and beware spoilers) it is the fact that both the boy and the horse survive the war and are able to return home despite the fact that countless untold others do not survive. One may react unfavorably to this point and thus cloud the entire film. This is of course a similar argument raised against Schindler’s List (1993), where the question of how can one portray a story of the saving of the few at the expense of portraying a story of the cost of the millions, or something to this effect. I think often films involving war themes come under fire because they aren’t perceived to be remorseful enough, or respectful enough or fill in the blank. If stories are constantly about the loss or denial of life, is there no one left to tell the story? Is there no one left to remember? Is it perhaps, in the case of certain films, more effective to follow the story of a survivor who's able to remember and share the impact of said events so others can learn from it in the future? I know I’m probably leading into a gray area of film criticism here, but I think there can be an argument made for presenting a story of the survival of the few, and it not be a denigration to the loss of the many, provided the story convey with humility and respect the events themselves, which I think this film does, given its treatment of various angles of the story, the respect toward each character presented etc. I’m not saying these are the only ways of thinking on this subject, but these are MY opinions. I know some others will feel it's rather shallow given the subject matter, but this is a matter of perspective and opinion, and I think there is evidence here to the contrary. Ultimately, I feel Spielberg has made one of his best films here and the sheer propulsion of storytelling and filmmaking is of the highest quality.
Posted by Jon at 7:00 PM

Thanks for your informed response. I have seen a lot of comments in different places and people have different opinions on this one. I must say I went into the theatre rather skeptical but curious and came out realizing it was great storytelling and really engaged with it on that level. You know I actually did like Titanic and I saw it when I was 17 I guess. I haven't seen it since. It's a love story and I do like love stories!

A few factors have consorted to keep me away, but I am finally feeling better today. Your stuependous review of WAR HORSE is opne of your best ever, and as you already know I'm with you lock, stock and barrel. You make an excellent case for the narrative device of the boy and the horse surviving the war, and employ excellent examples of films in the 'persevering humanity' school. I particularly liked the connecting to Ford and HOW GREEN WAS MY VALLEY. WAR HORSE is indeed as you note near the end one of Spielberg's finest films, and one is ravished by Kaminski's magnificent cinematography and one of John Williams's most lyrical scores.

Again you do a fabulous job translating the story and defending it's considerable strengths. It's one of my favorite films of 2011.

I liked War Horse, too, Jon! (Though not to the extent of Sam, here.) I think it has several passages that are sublime, and even the parts that are more clumsy are fascinating for their old-fashioned style and sensibility. I noticed the similarities to How Green Was My Valley and Sergeant York too, but I haven't seen the others you mention. There's something strange about watching old styles like that in a new film--it can be difficult to slip into the same attitude we can get in when watching an old classic, which I think contributes some to the widely diverging opinions on this one.

I'm not sure it's one of Spielberg's best, but it's certainly worth watching. In fact, I realize I'm going to have to watch it again to evaluate it better.

@ Sam- I undestand you haven't been feeling well. Hope you're on the mend very soon my friend. Yes thank you for your high praise and I know you and I see eye to eye on this one for sure. I'm actually going through a bunch of John Ford right now and I'm continuing to find more parallels between his work and Spielberg's in this film.

@Stephen- Yes I think you're right about maybe people having a hard time with watching new movies that evoke a different time period in film making. There's something similar going on with The Artist being divided, at least in the blogosphere between people that love it and others that are sort of baffled as to the high praise. I wonder if sometimes we give older films a benefit of the doubt that we don't to newer films in certain cases.