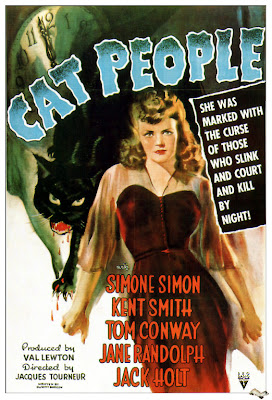 After watching Cat People, I thought this is the sort of film that is absolutely a joy to watch, but if you try to describe it to someone they might think it was silly. I’m going to take the plunge and offer up that Cat People is not only a classic horror film, but one that is entrancing, beautifully atmospheric, and absolutely film noir lurking around every corner. I will probably go so far to say that in some ways, this feels more film noir than horror as we know it. Perhaps, it’s the presence of Jacques Tourneur as director and Nicholas Musuraca as cinematographer. They would go on to partner at the helm of perhaps the most iconic film noir of all time, Out of the Past (1947), starring Robert Mitchum. 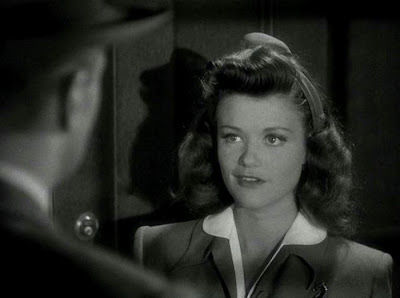 Val Lewton produced a series of horror films in the 1940's using a modest budget, yet managed to pull together some great talent. Cat People stars Simone Simon as Irena, a sexy, strange immigrant from living in , friendless and alone. We’re thinking - How could this woman be alone? Oliver, played by Kent Smith, strikes up a conversation with her at the zoo, as they ponder a black panther in a cage, and begins a fateful courtship with her. She is timid at first and tends to avoid showing emotion and affection toward him. We soon learn she comes from a town that is filled with dark secrets and some form of spell that might be controlling her life, and she believes that if she is “aroused”, she will turn into a panther. An interesting thing occurs after Irena and Oliver marry. We realize that Irena refuses to sleep with him and consummate the marriage. She is fearful that displaying such passion will awaken her inner feline. We find that Irena becomes jealous of a character named Alice (played by Jane Randolph), who works in Oliver’s office and who Irena suspects is having an affair with her husband. This starts the film down the dark path of film noir, highlighting a woman scorned and a battle between passion and repression played out on the streets of New York, filled with symbolic imagery, moody lighting, fog, shadows, manipulative characters and a palpable sense of doom. 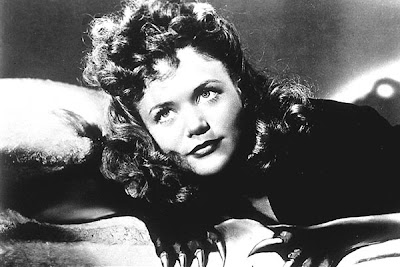 Several scenes are standout. One is a stalking scene where is rushing down a garishly lit street pursued by something or someone she cannot see. This scene is brilliant twofold: for the lighting, absolutely perfect in its contrast between dark and light playing off the stone wall in the background, and for the quick cuts in the frame and the sound of her clicking heels that employ one's heart to race as she walks faster and faster. Another stalking scene occurs in an indoor swimming pool as swims alone where it is darkly lit, shadows and light playing on the ceiling as the tension builds. I was actually reminded of “The Shower Scene” in Hitchcock’s Psycho (1960), as the characters surrounded by water are quite vulnerable. If you’re in a swimming pool, you’re vulnerable. You can’t run, you’re not clothed well etc. If you’re in a shower it’s the same idea. You’re confined, you’re wet, naked and you can’t see well. Both Cat People and Psycho make great use of vulnerability in these scenes. 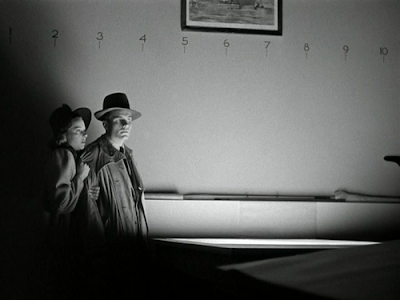 Jacques Tourneur’s direction is carefully paced, holding off on the money scenes until absolutely necessary, drawing the audience in as much as possible before letting the tension release. Ultimately, I love this movie for the way it takes the horror genre and turns it into a personal existential crisis. Irena never wanted to become part of a relationship. She did and it took her down a path she never wanted to go, getting herself deeper into the abyss of a murky morality where she came to a point of no return. That fits my definition for film noir and if there’s a movie where a seemingly good or well-intentioned individual makes a mistake, they usually follow it up with another and another until they come face to face with their destiny. Cat People also contains a sexiness to it, with all the feline imagery, the deviant repression, symbolism and the dark shadows. Musuraca’s cinematography is pure genius turning the stalking scenes into elevated art and several sets into ominous creations. I’m especially thinking of the design office where Alice and Oliver end up near the climax of the movie. Lighting and angle play upon each other so well in this scene that it truly makes the visuals stand out and elevates the scene beyond mere suspense. Call the film silly if you want, but there is a lot going on here and it’s a brilliant horror/noir film. They don’t make them like this anymore.
Posted by Jon at 10:16 PM

Yes the Lewton/Tourneur collaboration was close to it's heighjt with this wildly-popular first entry in the RKO B unit horror series, and immediately up next their poetic and elegant I WALKED WITH A ZOMBIE made for their top partnership of all. You do a great job talking about the pacing, the feline imagery etc, and I stand with you in celebrating this seminal horror film.

Glad you agree Sam! I will be digging more into their output as there's so much there to immerse yourself in. Poetic and elegant are hardly words people use to describe horror, but their films really do fit that type of description. Thanks for stopping by my friend!

I stumbled on your blog through google and I love it! great posts! I just saw Cat People on TCM for their Halloween special and it was pretty great. I agree that it is more film noir than horror but the scenes with Alice were definitely scary. Looking forward to exploring the rest of your blog. Keep up the good work!

Thanks for stopping by and for your great comment! I watched a couple of other Val Lewton produced films recently, and didn't like The Curse of the Cat People as much, but I Walked With A Zombie is great! Thanks and stop by again!