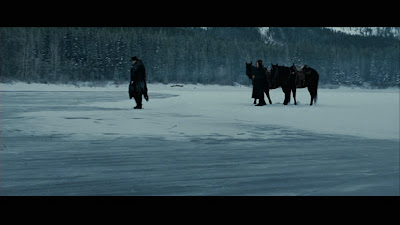 Andrew Dominik’s long, elegiac story of Robert Ford, the man who killed outlaw Jesse James, is a modern Western masterpiece. I say it’s the story of Robert Ford, even though Brad Pitt plays Jesse James and it’s hard to ignore his presence. Interestingly, Robert Ford is the much more realized character of the two and the film is from his point of view. Played by Casey Affleck, Robert Ford is a twitchy, shy young man brought into Jesse James’ fold near the end of his life. James leads Ford and others in a train robbery and decides to keep Ford along as his sidekick of sorts at home for awhile. They begin an awkward relationship that continues throughout the rest of James’ life, ending when Ford shoots James in the back of the head, killing him, creating notoriety for Ford. This film is the story of their untenable and bizarre bond. 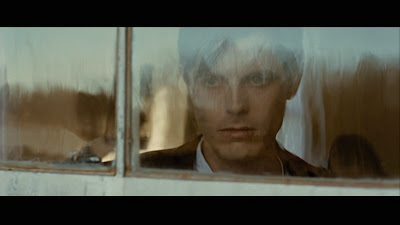 Casey Affleck’s portrayal of Ford is well-played and in fact, upstages Pitt’s portrayal of James. Affleck’s uneasy quality on screen makes for a tone of portrayal that is awkward and filled with depth. Ford never seems to be comfortable in his own skin and Affleck portrays this in every scene. Ford pretends to smile, pretends to smoke, and pretends to get along with everyone. All the while, he’s obsessing over the life and times of James, his mind churning with a never-ending paranoia as he is teased, coaxed, and tempted by visions of grandeur and immortality. Hero worship is a grand understatement for this man. From a young age, Ford apparently collected articles and magazines detailing the exploits of James and basically ended up a “crazed fan” of sorts. Affleck imbues Ford with a starry-eyed naiveté, but also a careless, violent streak, making us believe he not only admires and loves James, but would also be capable of betrayal for the right price. During the denouement of the film, after the assassination, we see Affleck becoming increasingly paranoid and withdrawn. James’ death was the beginning of the end for Robert Ford. It was a symbiotic relationship of sorts for Ford, and he could not survive without James. 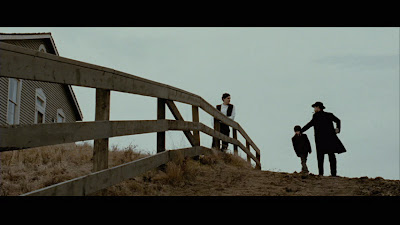 Making full use of the widescreen photography, Roger Deakins is the film’s other main star, as cinematographer. The Assassination... is loaded with beautiful vistas of the plains, mostly during winter, creating a gray, bleak atmosphere. I sensed a strict adherence to natural light and/or candlelight only during filming. I couldn’t find any scenes that were noticeably lit artificially and this lends great credibility to the whole film. Deakins is one of the true masters of photography around with a long list of credits to his name. He has done great work over his career, capturing many of the Coen Brothers’ movies on film, like No Country for Old Men (2007). One can also see bits and pieces of other films that appear in the images, like the David Lean film Doctor Zhivago (1965), and Robert Altman’s gloomy revisionist Western, McCabe and Mrs. Miller (1971). One could probably just watch the film without sound and even realize how great a movie this is. 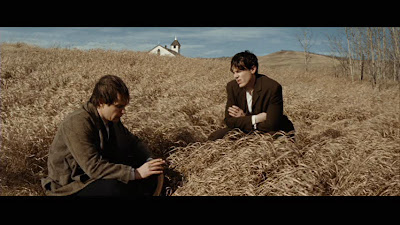 Dominik’s use of voiceover narration in the film takes many sections and turns them into historical, documentary-like passages. In fact, these scenes with the narrator recall the brilliant narration in Ken Burns' documentary The Civil War (1990), where the voice-over yielded a refined, mournful tone to the whole thing. Similarly in The Assassination..., the narrator provides a grace and gravity to many scenes. Ultimately, the story-arc, though slow to develop, is what makes this film so great. Ford and James have fate pushing them together throughout the story, creating a palpable pre-destination for their lives. Before you even watch the film, you already know the story. There's nothing surprising about what occurs. We know the history. What is remarkable is that the film also knows that we know. It doesn't pretend to masquerade as if this story is being told for the first time. There is no hiding the fact that the destinies have been foretold. Ford, it seems, was born to kill Jesse James and his entire life had culminated in the one act that he was destined for. James knew he was going to die and basically hand-picked his killer. Dominik’s direction and script emphasize this destiny at every turn, propelling the film onward towards the fateful moment and beyond. This is one of the essential films of the 2000's.
Posted by Jon at 10:07 PM

I completely agree with your assessment that this is a modern Western masterpiece. The film has such a dream like quality, and that has been beautifully accentuated through the stream-of-conscience kind of voiceover, melancholic tone, leisurely pacing, and the stunning photography.

You made a great point regarding the symbiotic yet bizarre bond shared by the film's two central characters. Cassey Affleck was really good as the queasy Robert Ford, but it was Brad Pitt who stole the show for me as the larger than life outlaw Jesse James and provided the film with its elegiac quality.

In fact, along with the likes of Fight Club, Seven & Inglorious Bastards, this film ranks among his best performances. His small turn in Babel was also noteworthy. I've heard he was excellent in 12 Monkeys too, and that's one of the many movies I'm yet to watch but determined to correct sooner rather than later.

Shubhajit thanks for the comments. We both agree on the greatness of the film. Brad Pitt for me is sometimes distracting and he doesn't tend to do much for me, but in this one it was not a negative. I found him to be somewhat impenetrable but I think that maybe was what he was going for. I did like him in Inglorious Basterds though. Casey Affleck was a pleasant surprise here and seemed to elevate himself to the task. Overall a brilliant film and I guess I'm one of the last ones to catch on to this one!

This is indeed a very great film, a revisionist Western par excellence. Excellent point you make suggesting the 'mournaful tone' in Burns's THE CIVIL WAR mirroring some of the historical, documentary-like passages. The leads are outstanding, and as you note Roger Deakins is a major player, as in fact are Nick Cave and Warren Ellis, who penned one of the most unforgettable scores of the 2000's. This is one of my favorite films of the new millenium.

Hey Sam, thanks for the comments. There was a point as I was watching the film where I wondered if it was the same narrator from the documentary on the Civil War, but it wasn't as I checked after. It just had that same sort of tone and mood to it. Perfect for this film. Yes now that you mention it, the score was very good. I think I probably was so distracted by the visuals, but the score deserves mention as you noted.

Jonny - Well done here. This is one of my favorite movies of the past ten years and I recently watched it again - after seeing The Tree of Life and feeling a craving some more awesome cinematography. Deakins's camerawork certainly captures the gravity of a given moment. I love the shot of Jesse shooting at the fish under the ice. I love the shot of Bob pumping water on the fateful morning - the water slightly sped up. Yes, the story develops slowly but it builds to a very tense climax. I agree Affleck's performance is tremendous - but Pitt is excellent as well. I love when Jesse asks Bob what the stew needs and Bob, befuddled by the question, says, "Dumplings?" in such a weak way.

Hey Hokahey thanks for commenting. There are a lot of moments in the film that ring true and I think that's what keeps the pace moving despite the length. Every moment by itself is done right, building toward the greater effect of the entire film. As I mentioned before, Pitt doesn't usually do much for me as an actor and it was similar here, which isn't to say it's a flaw of the film, but it wasn't necessary for me to totally "get" his character. His was a "fading rock star" kind of performance and the film needed that persona. What pulled me in emotionally was actually Affleck. He affected me in a unique way, more than anyone else in the film.

Definitely, Affleck is amazing in this movie and he was robbed when he didn't win Best Supporting Actor - losing to Bardem for just looking grim and killing people. Every line Affleck delivers is so much part of the character. Love it when he reacts like a little kid to the bullies who rummage through his box of Jesse James things. But I was touched by Pitt's James as well. He comes off as so haunted, grimly expecting death at any instant.

You're right about Pitt's characterization in that he does seem haunted and sure of his certain fate. He definitely got that right and it was palpable the way he was anticipating his death. Affleck's Ford is very immature for sure and reacts like a child would, good insight.