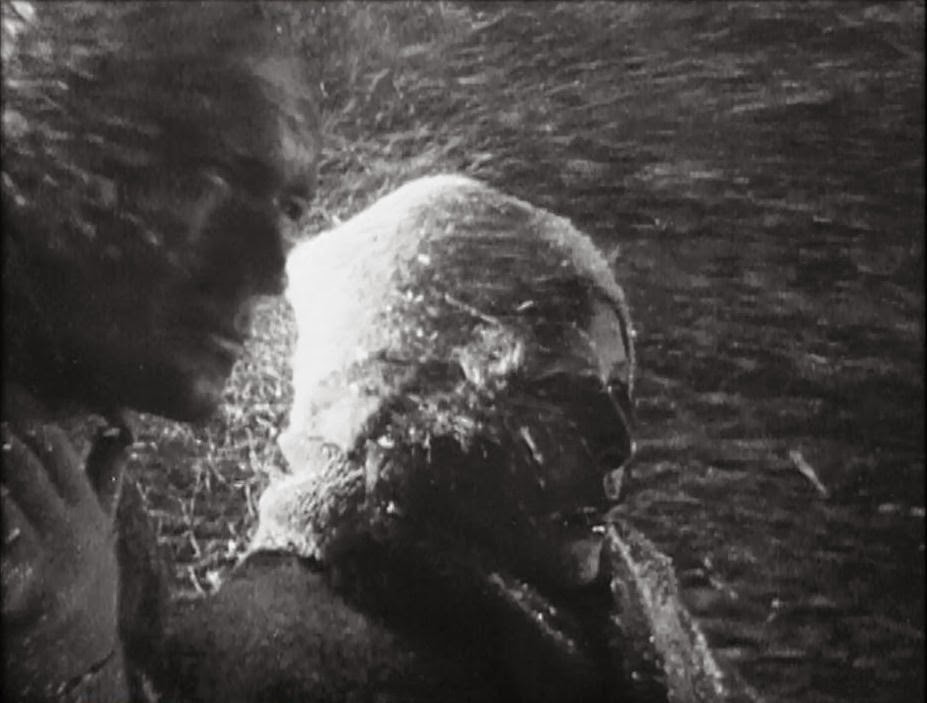 Popular in the 1920’s and 1930’s, the German Mountain Film, or Bergfilme is a bit of a lost and forgotten genre, with little critical examination applied to it to date as I’ve found. Perhaps it’s because it was so celebrated by one particular culture, the Germans, that it didn’t quite find as far of a reach, as there seems to be a cultural leaning and exploration on display that doesn’t quite ignite the intellectual rigor of other cultures. Sure there are modern examples of the “Mountain Film”, but they share little in common with the commanding visuals and mystical approach of the German Mountain Film of years ago. Of particular note is Arnold Fanck and G.W. Pabst’s The White Hell of Pitz Palu, a staggeringly shot and beautiful adventure film that stands as a remarkable achievement in on-location photography and action-oriented filmmaking. 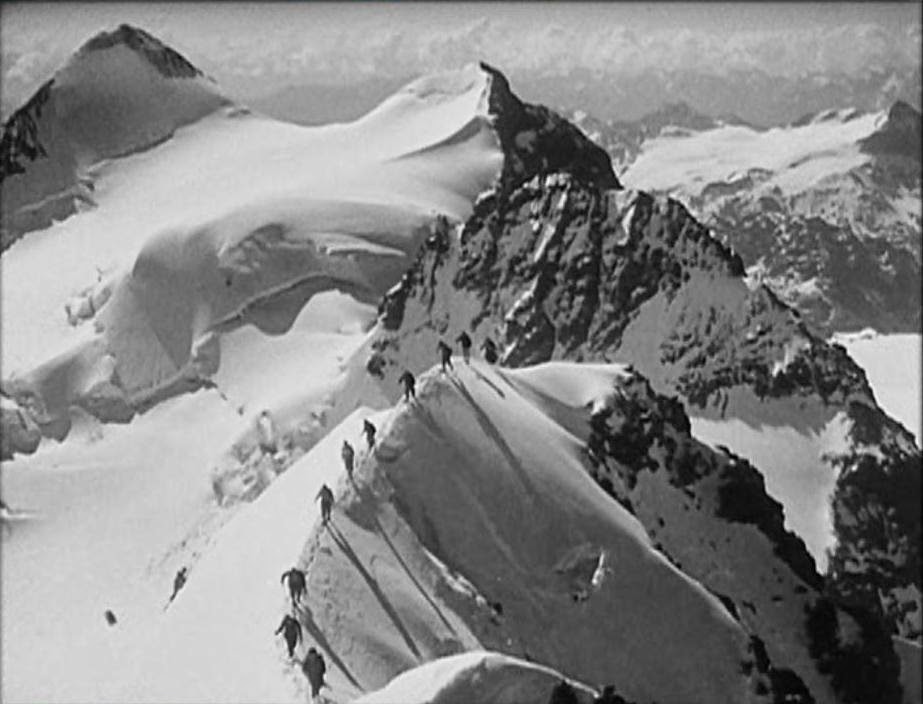 Fanck was the most famous and innovative of the Bergfilme directors, and is credited with most of the on-location mountain shooting here, while reportedly it was Pabst who was credited with the set shooting and more melodramatic elements. This film starts out with a small crew climbing a mountain called Pitz Palu. The alipinist Dr. Krafft (Gustav Diessl) is leading the climb when his wife suddenly falls to her death. He blames himself for her death and sets about finding her body without much success. 10 years onward, a young married couple, Karl (Ernst Petersen) and Maria (Leni Riefenstahl) set out to climb the same mountain and it so happens that Dr. Krafft meets up with them and they climb together, with Krafft still determined to find his dead wife. A storm leaves the small group stranded on an icy outcrop of the mountain as Krafft tries to alert those down below of their whereabouts while the three of them try to stay warm to little success. A rescue team is formed to try and save them in a race against the clock. Sacrifice and devotion is examined as the three stranded climbers must determine how they will stay alive. 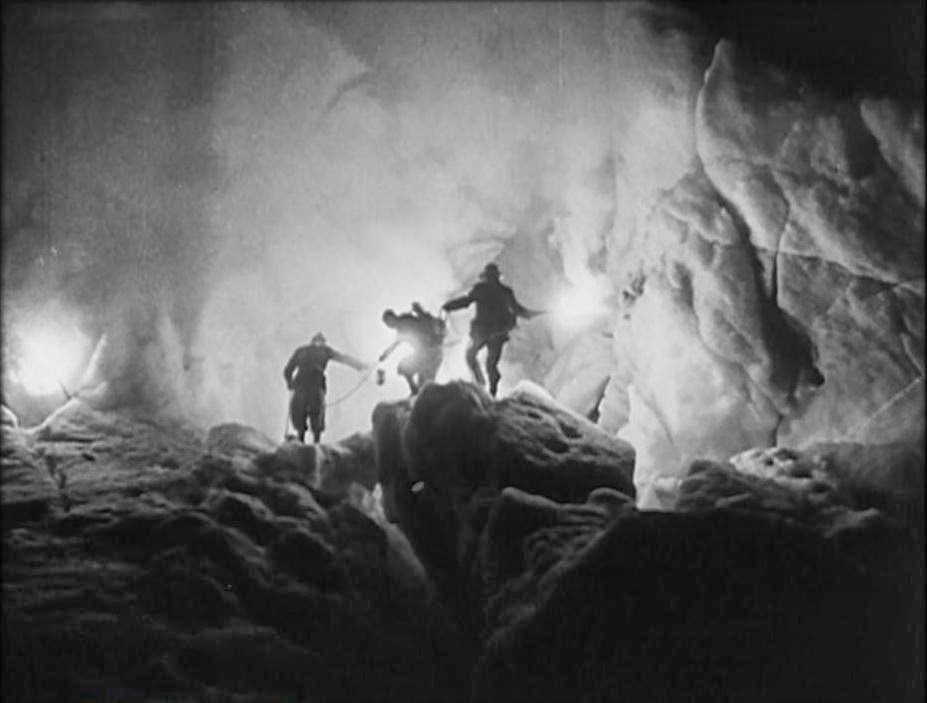 Fanck’s talent for filming action sequences and mountain climbing is quite breathtaking. Avalanches and dangerous precipices are filmed with remarkable positioning and angle, so much so, that one wonders how some of these shots were filmed, particular from down inside of glaciar crevaces. Often, the beauty and the treachery of ice and snow is co-mingled here in the frame. As climbers face impending death, Fanck’s sequencing of images is startlingly effective, particularly in the moment when several climbers are thrown from the mountain by an avalanche, Fanck quick-cutting from snow to open mouths, to bodies being thrown through the air. No less effective is Pabst, who was in his prime in 1929, also directing the fabulous Pandora’s Box. Pabst knows how to light Leni Riefenstahl’s face and also capture the raw emotion of fear, love, and desire that she displays throughout. Reifenstahl in fact gives a solid performance here in a film that would influence her as she soon began her infamous directing career. 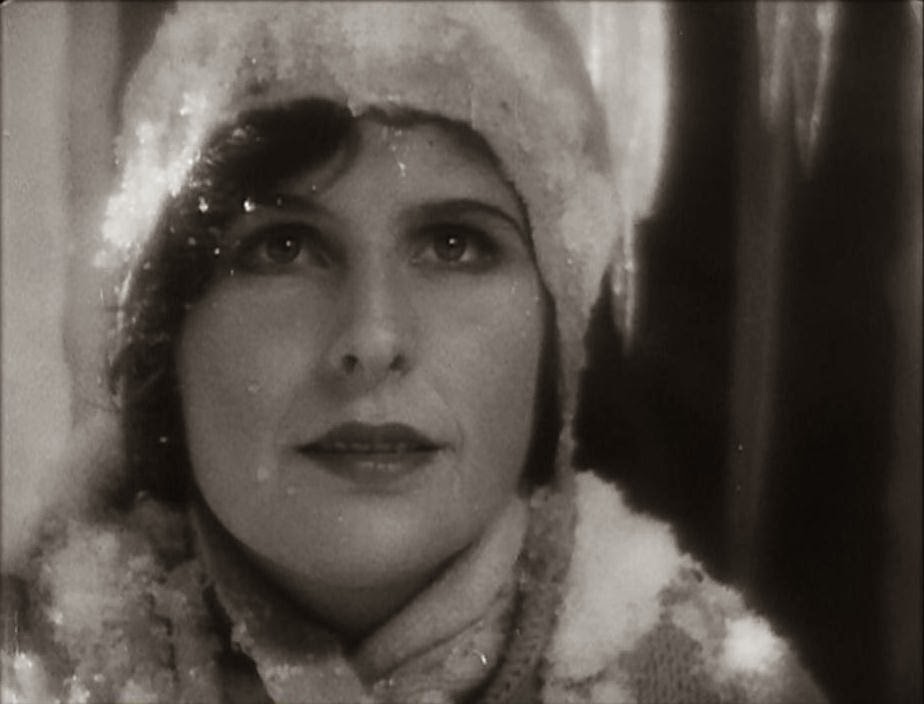 When taken within the context of German history and culture, the film (and others like it) is a historical and social document of Weimer era Germany, containing seeds of the sort of socialist/fascist frame of mind that would overtake the nation in coming years. There is a mystical sense of nature, of enlightenment, of domination and the need to conquer that is inherent to the concept of alpine climbing, which is used here to forward a state of mind that incorporates these things along with an urge to commune with nature in an elemental, primordial way. One could interpret the content and perspective of this film through the lens of the coming era of Nazism, Aryan manifest destiny (Lebensraum) and superiority. Bergfilme seems to have at its core, a belief that the outdoors is sacred and by engaging with this sacred place, one will find enlightenment and power. Many have stated that the Bergfilme can be viewed through Nazism and although at times, this reference point can be ambiguous, it certainly doesn’t make for easy conversation. Reifenstahl would find infamy after making her own Bergfilme, The Blue Light (a spectacular film in its own right), which Hitler saw and inspired him to choose her to make his propagandist works. One of the reasons for a potential avoidance of films like The White Hell of Pitz Palu is in fact the associations it brings to mind. And yet, from a purely filmmaking standpoint, there are things to admire and recognize here….moments, feelings, textures, and the way the camera allows us to experience the glory of the beautiful mountainsides and the hell of being caught near impending death.
Posted by Jon at 7:00 AM

"And yet, from a purely filmmaking standpoint, there are things to admire and recognize here….moments, feelings, textures, and the way the camera allows us to experience the glory of the beautiful mountainsides and the hell of being caught near impending death."

Indeed Jon. Great closing and a masterful analysis of this too often overlooked classic. I have very high regard for it too, though it's been a while since I last watched it.

Thanks for the support Sam!

We're linking to your article for Leni Riefenstahl Wednesday at SeminalCinemaOutfit.com

Keep up the good work!

Thanks Dan. I just checked out your site. Pretty cool over there. Thanks for the support.