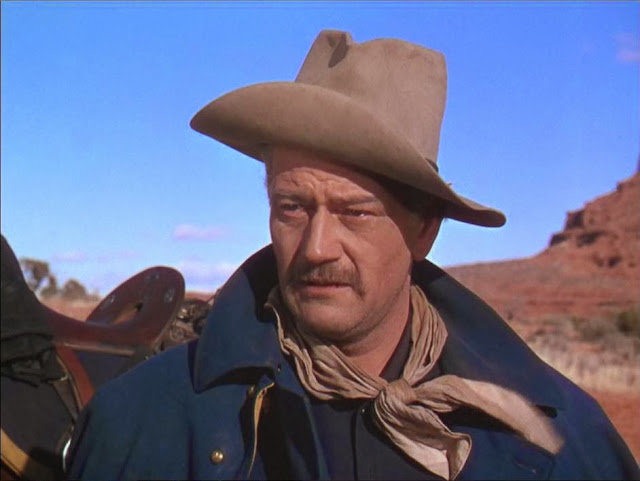 Note: This review appears at Wonders in the Dark in the Top 50 Western Countdown, placing at #24.

"Sentimental" is often a pejorative term used to describe a certain kind of art that wears its heart on its sleeve. Regarding film in particular, Ford, Capra and Spielberg have had the term flung at them in condemnation at times. Sentiment is actually neither good nor bad in and of itself though. It is simply a mode for conveying a certain feeling that the director is trying to express, but more often than not, the term has significant negative connotations for some. John Ford was certainly fond of sentiment, or nostalgia or whatever you want to call it, and She Wore a Yellow Ribbon is probably his greatest use of it in westerns at least, wrapping the film with a heartwarming charm. As the second film in The Cavalry Trilogy (and best to my mind), it followed Fort Apache and came before Rio Grande. It’s significantly memorable for several reasons even among Ford's films. Among them the beautiful cinematography by Winton C. Hoch, in color, as he made iconic use of Monument Valley and incorporated imagery borrowed from the paintings of Frederic Remington; furthermore, this just might be the prime example of Ford’s “kitchen sink” approach to making westerns….meaning everything but the kitchen sink….where he weaves action, romance, sentiment, comedy into the plot and often turns on a dime to switch gears. And I would be remiss if I didn't mention the most memorable thing about the film: John Wayne’s epic and beautiful evocation of traditional Fordian values as he portrays an aging hero, cavalry officer Captain Nathan Brittles. 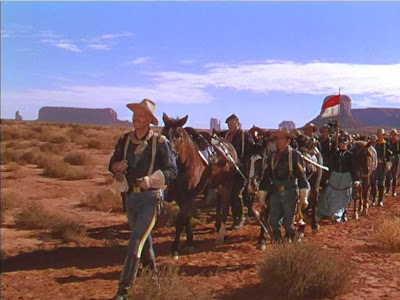 Wayne stars as Brittles, Cavalry Captain of a troupe of men stationed in the southwest at Ft. Starke. He is a week away from retirement and is charged with one final task, which is to escort the Major’s wife Abby (Mildred Natwick) and niece Olivia (Joanne Dru) to a stagecoach post where they will be catching transportation back east. As added backdrop to the storyline, General Custer has just been killed at the Little Bighorn and many of the American Indian tribes are joining efforts, becoming a threat in the area. There’s also a charming subplot that has Olivia being courted by two cavalry gentleman named Flint Cohill (John Agar) and Ross Pennell (Harry Carry Jr.). When Brittles leads the troupe to the stage coach post, he finds that it’s been attacked by the American Indians as part of the uprising and he retreats back to the fort, failing in his mission and feeling like he has let everyone down. On his final day on the job, he redeems himself by fending off a potential war, stampeding the tribe's horses out of their camp, forcing their retreat to the reservation. 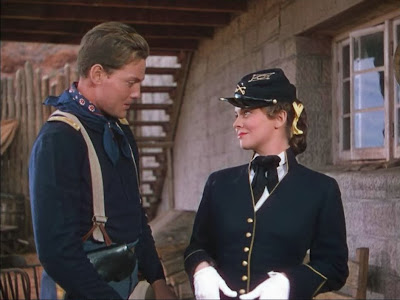 Ford has a way of emphasizing the rituals of daily cavalry life, infusing a knowing recognition of tradition, values, and nostalgia into the story. Early on in the film, we see flags and bugle calls, the early morning assemblies and inspection of the troupes. We also see the picture display on Nathan’s desk of his late wife and daughters. This touching memorial sets off another type of tradition, whereby Nathan seems to spend every evening out in the little adjacent cemetery where the three of them are buried. Their tombstones read their death was in 1867, and knowing that the current year is 1876 (Custer’s Last Stand was this year), that means Brittles has been doing this little ritual for 9 years. It is these rituals and traditions and the camaraderie of the troupes on display that make the film so uniquely Fordian, as one of his defining traits as a director was his emphasis on upstanding values…..heroism, loyalty, sacrifice, determination. These aspects lend themselves toward the sentimental side of things, but the film succeeds because of it, not in spite of it, generating a significant amount of sincere emotion and warmth from the American spirit on display and a sort of homespun catharsis begins to form. Comedy helps offset the sentiment, and Ford weaves in a great deal of comedy relief courtesy of Irish actor Victor McLagen as the often drunk Sergeant Quincannon, allowing for Wayne’s comedic sense of timing to play off him nicely… “You got a breath on ya like a hot mince pie!”. 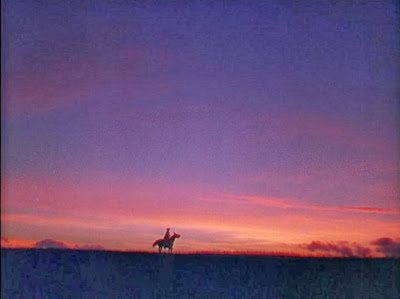 Photographer Winton C. Hoch won the Academy Award for best color photography for 1949, and his work here at framing individuals with Monument Valley in the background is often breathtaking. You could just press pause once in a while and look at it like a painting. I particularly love the way that Hoch framed and filmed the scene where Wayne sits and talks with his late wife on the ridge of the cemetery with the rose-colored hues of a sunset bathing the scene in a lovely pink color. Of particular note is the interesting scene filmed on the plains during a thunderstorm, which was apparently not pre-planned, but Ford wanted to keep filming once the storm came up, forcing Hoch to continue filming in the darkening light, something uncommon considering this was a Technicolor film (and at a cost of $1.6MM, the most expensive western ever made up until that point). But it’s one of the most memorable scenes in the film, perfectly capturing the flailing mood of Brittles and his troupe at that critical moment in the film. Richard Hagemen (a Ford favorite) donated a wonderful score to this film, as he captures the myriads of moods on, going from jaunty and comedic to melancholy and sentimental, flipping the tone as deftly as Ford is able to do, even incorporating snippets of Irish music and the lovely strains of “Dixie” at one point. 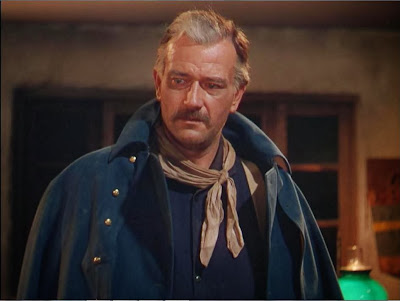 Last but certainly not least, is Wayne’s performance, which has to be one of his very best, even among performances in Red River, Rio Bravo, The Searchers, and The Man Who Shot Liberty Valence. In this challenging role, Wayne plays a man about 20 years older than he was, with graying hair, a mustache and a few extra wrinkles on display at times. He is able to incorporate many of his masterful acting traits throughout the film, from his commanding sense of leadership and duty, to comedic timing, to romantic sentiment, it’s all here on full display and he rarely ever expressed such brilliant range as in this film. There are even a few critical moments, like when Brittles receives that silver watch, or when he is talking of his failures with the Major, that tears begin to well up in his eyes. One can see that Wayne really put a lot of effort into this one. I was talking with my 5 year-old daughter a week ago and she told me her favorite actor was John Wayne. I said that’s a great choice. We sat down and watched this film together, and in the middle of the film, she remarked, “John Wayne is such a good actor.” My personal favorite moment is when Wayne gets upset at the two young soldiers for preparing to fight over the love of Olivia with a poor choice of timing.

Brittles: "Button your shirt Mr. Pennell. Thought better of you. 4 years out here and still acting like a wet eared "kaydet" on the Hudson. What is this all about Mr. Cohill?"
Cohill: "Sir I decline to answer…..respectfully."

Brittles: "Mr. Cohill. It is a bitter thing indeed to learn that an officer who has nine years experience in the cavalry…. The officer to whom I am surrendering command of this troupe in 2 more days…. Should have so little grasp of leadership….. as to allow himself to be chivied into a go at fisticuffs…. while taps still sounds over a brave man’s grave..... God help this troupe when I’m gone." 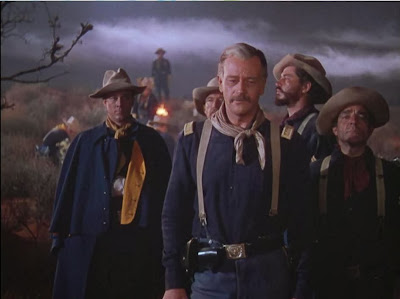 Wayne uses his inflections and his eyes tremendously during this scene and I could literally watch this scene over and over again. Some may complain that the film is too sentimental for its own good, but I would hearken to say that with the sensitive portrayal by Wayne and the careful balancing act of the script and Ford's handling of values, that Ford was intending everything with a high degree of sincerity, and not taking shortcuts. Some also may complain about the portrayal of the American Indians in the film. I would agree that the portrayal certainly isn't all that enlightened, but the film isn't really about them or about personalizing their story. That would come much later in Cheyenne Autumn. It's about Brittles and the Cavalry and about military tradition and honor. Everything in this film comes together for this to be one of the most Fordian of all Ford films, as it contains so many elements that make Ford great and is a prime example of his effective storytelling. It’s simply a lovely film that gets better every time I see it.
Posted by Jon at 7:00 AM

A great review here and at WitD. And everywhere!

Romance didn't work for me. Saloon brawl with Victor McLaglen went on far too long. John Wayne is very fine. I enjoyed his meeting with Chief Pony That Walks. Cinematography is impressive, but I still like Rio Grande the best of the trilogy.