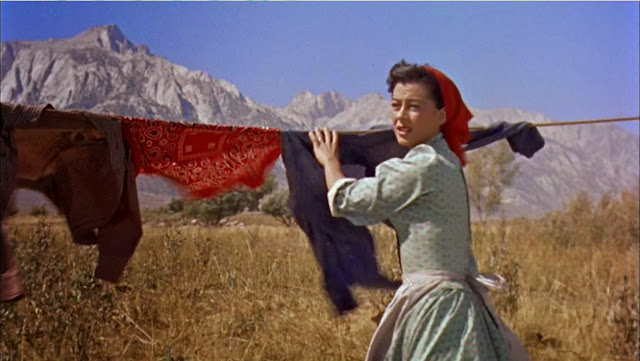 Note: This review appears on the Top 50 Westerns countdown at Wonders in the Dark, placing at #28.

“The reason that people understand the westerns I made with Randy Scott is that they were simple…..nothing in those Scott pictures would make the audience say, “What did he mean? What was he trying to say?........I said it very simply, and that’s the way I make my pictures. One doesn’t have to sit there and say, “Well, I don’t know….ethically….and maybe he meant…” That’s a lot of crap: to be so artistic that you don’t make sense.”

For it is indeed the most intelligent western I know while being at the same time the least intellectual, the most subtle and the least aestheticizing, the simplest and finest example of the form.

Through a series of 7 films that Budd Boetticher made in conjunction with his star Randolph Scott, the western saw some of its finest films get made. The best of the bunch, The Tall T, Ride Lonesome, Comanche Station, and especially Seven Men From Now were all written by Burt Kennedy. It was a tremendous stretch run for a director, writer, star combination, and it's really only in recent years that Boetticher's films have become more available and more lauded, finally landing Boetticher in the same discussion with Ford, Mann, and Leone (and I think Daves could be included as well). It turns out that Seven Men From Now, in particular, has been little seen for decades and only available in archive prints until about 2005. Because the film was produced under John Wayne's Batjac film company (as opposed to Ranown Productions), it had different distribution rights than the other films in the series, and after Wayne's death, the film remained in hiding for the most part. It's almost hard to believe that a film THIS good was so hard to see for so long. It is high time that this film gets seen because it's one of the most perfect westerns ever made, and is worthy of consideration for top 10 status. Perhaps in years to come, this film, and Boetticher's works in general, will continue to receive more recognition within the western genre. 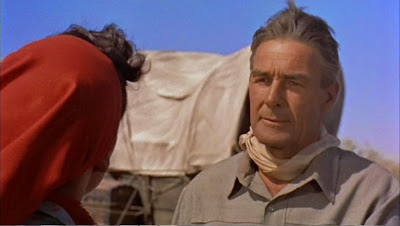 Seven Men From Now was the first of the series, the best of the series, and laid the framework for the films in the Ranown cycle. Randolph Scott stars as Ben Stride, ex-sheriff, who is hunting a group of 7 criminals who stole $20,000 from the Wells Fargo freight office......and also killed Stride’s wife in the process. He’s out to track them down, kill them, and return the money. He lost his job following the event, so is now taking law into his own hands, not waiting for anyone else to do that job. He kills two of the men early in the film in an excellent setpiece in the rain, dropping us right in the middle of his quest. Then he comes across a married couple, John and Annie Grier (Walter Reed and Gail Russell) traveling west from Kansas City who are trying to reach California. He helps get their wagon out of a muddy ditch and then decides to ride along with them for a while. It is clear one of the reasons he stays with them is that he has eyes for Annie. They happen across two ex-cons, Bill (a brilliant Lee Marvin) and Clete (Don Barry), both of whom Stride once put behind bars. These two are tracking the same criminals and want the money for themselves. Friction builds as Stride and Annie begin to develop feelings for each other, while Bill begins to prod and tease them as he notices it, right in front of John, the husband. Before long, Stride steps aside from the group in order to face down the remaining criminals and deliver justice in the proverbial showdowns that ensue. 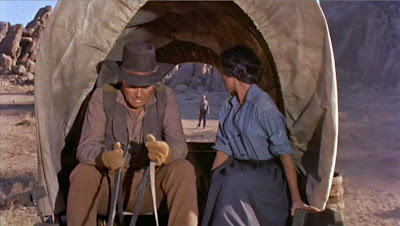 John Wayne's Batjac production company bought the script from Burt Kennedy, with the original intention of having Wayne star as the lead character. He was tied up with making The Searchers at the time though, and instead chose Randolph Scott to star, which I think was the perfect choice. Scott seems like some kind of perfect amalgam of all the great western lead actors, somehow encompassing the little bits and pieces that we like about Wayne, Fonda, Stewart, Eastwood etc., but is remarkably balanced, not dipping too far into any particular acting stereotype. I like his stoicism, his smirking nonchalance, his deft masculinity...... I almost can't even imagine Wayne in Scott's role here. Scott is far more down to earth, which fits Boetticher's simple, bare-bones aesthetic. What I find consistent in all of these films that Scott and Boetticher made together, is the genuine goodness of Scott’s characters, despite the fact that he often has reasons to be angry and vengeful: he is polite to women; he is chivalrous and does good deeds without expecting anything in return; he usually has a good degree of patience and calmness in the face of danger; he rarely ever raises his voice or speaks harshly of anyone. There's something so unassuming and unpretentious about him.  For me, he is the prototypical, no nonsense cowboy of all time. No wonder Andre Bazin likened Scott to William S. Hart. Nothing ever seems to phase this guy, not even in the final showdown in this film, when he’s hobbling on one good leg, using his shotgun as a cane, and has to face down Lee Marvin in a draw who has two guns and two good legs. Boetticher utilizes Scott's persona to build a simple purity of the western as artform, which appeals to true western aficionados. Boetticher stripped his works of over-reaching and complex, extracurricular contexts. They are not about unspoken backstory or some mystery, per se, to rely upon characterization (Mann), nor do they rely on the “kitchen sink” approach (throwing in comedy, romance, sentiment, action, social commentary etc.), like Ford uses, nor are they moral proverbs like Daves’s films (3:10 to Yuma, Jubal, Broken Arrow), nor are they social allegories (High Noon) or reflexive mythological examinations (Shane). They are in a sense, about the here and now....the ever present moment and the decisions made in those moments. Yes Stride has a backstory providing a set-up, but there isn't really anything hiding. The pre-destiny of the situation is written on Scott's face. It is about what Stride is doing in the moment as he rides, as he thinks, and as he talks. The purity of the storyline and lack of pretension reverts the western to its essentials. Many have often called Boetticher's films, "chamber westerns" and this is because they're so focused and lean, without a wasted moment, but they also contain a certain limited list of characters who are thrown together and must work out their problems in a relative isolated situation. Despite the simplicity, there is a remarkable range to Boetticher's best works...brutal and violent, austere and stoic, tender and sensitive, and nearly perfect in their clarity. 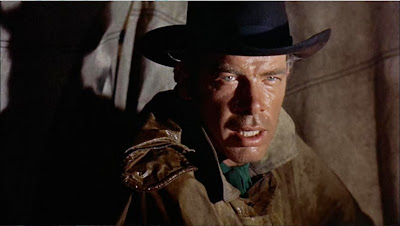 One of the subtle charms of Seven Men from Now, is in fact the blossoming relationship between Annie and Stride. Both Scott and Gail Russell give beautiful performances. One never truly gets a direct sense that Scott's character is that interested in sex (Scott was reportedly gay, which lends interesting context to many of these films.) But they seem to have a mutual affinity for the sharing of each other's burdens. Gail Russell's performance is greatly enhanced when you understand that she hadn't appeared in a film in 5 years. She had been John Wayne's good friend, as they appeared in a few films together (namely Angel and the Badman), but severe alcoholism had stricken her career and by 1951, she was out of Hollywood. With Seven Men From Now, Wayne was able to provide a part to the 32 year-old Russell, whose naked, emotional tenderness adds so much to the film. She would in fact die from a heart attack due to alcoholism within 5 years of the release of this film. The yearning friendship of man and woman certainly makes for some wonderfully written moments between Scott and Russell, which keeps the film from becoming too masculine and linear for its own good, as the "uncool" aspect of a man and woman falling in love certainly doesn't fit well with the loner cowboy, masculine aesthetic. In fact, Boetticher routinely refuses to cooperate with or relate to cliches in his films, often giving us exactly the opposite of what we expect. For instance in Ride Lonesome, where Karen Steele appears as the curvaceous blonde, there is nary a whisp of interest from Scott's character at all. At the end of that film, the two part ways as nonchalantly as you please. Here in Seven Men From Now (where we have the loner cowboy on a complex, dogged mission) Stride is sidetracked by the potential love of a woman who's rather plain and is in fact married! There's even a sort-of "sex scene" between the two of them, as she lies in the wagon and he sleeps under the wagon to escape the whether, the two of them achingly close. We can also look at the final showdown here, as Boetticher undermines the rules of the western draw..... as when Scott and Marvin draw, we don't even see Scott pull his guns. Instead the camera stays on Marvin as he falls over. Speaking of Marvin, he's incredibly confident and effective here and it's easy to see how he became such a huge star after this. His projection and body language reek of attitude. Marvin's characterization is filled with warmth and life, making him likable to a point and rather intelligent, turning him into a bad guy whom we hate to see die at the end. Boetticher routinely populates his films with personality driven and rather flamboyant villains from Richard Boone, Henry Silva, Lee Van Cleef, Claude Akins etc., giving them a definitive, rounded humanism. 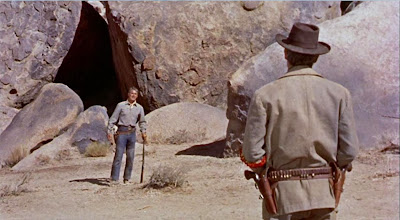 Regarding Boetticher's approach, it would be a mistake to overanalyze his works, but there's simply too much to enjoy, like Kennedy's unadorned and propulsive script, which would be a hallmark of Boetticher's best works. Furthermore, William H. Clothier's cinematography creates some of the most beautiful and eye-catching visuals in any western film and the color palette is often striking. He was on contract to work with Wayne in his Batjac production company, and the two would collaborate together on 22 films. In particular, sequences involving Gail Russell hanging up the laundry, a particular scene where the wagon rolls away with Scott in the background, and the final showdown, are framed so perfectly, it's astounding. Ultimately though, the legend of a film like this boils down to the way that Boetticher strips everything to a series of man to man conflicts in the form of showdowns, both psychological and physical. Through this, we find the basis of the types of westerns that would be built in the decades to come.
Posted by Jon at 7:00 PM

Great review! One of the things I love about Boetticher's westerns and this one in particular are his, as you say, "flamboyant villains." Lee Marvin in this film and Richard Boone in "The Tall T" are immensely likeable in so many ways, and you get the feeling that they could easily have been friends with Randolph Scott's hero were had they not chosen a different path. Their personalities make the final shootouts that much more poignant and tragic because you are not necessarily rooting for their deaths.

Oh yes absolutely agree with you. Such fascinating human characters who inspire a good deal of sympathy throughout the films. Boetticher is so good at that element among many others. Thanks for the comment.