The Battle at Elderbush Gulch (1913) - Directed by D.W. Griffith 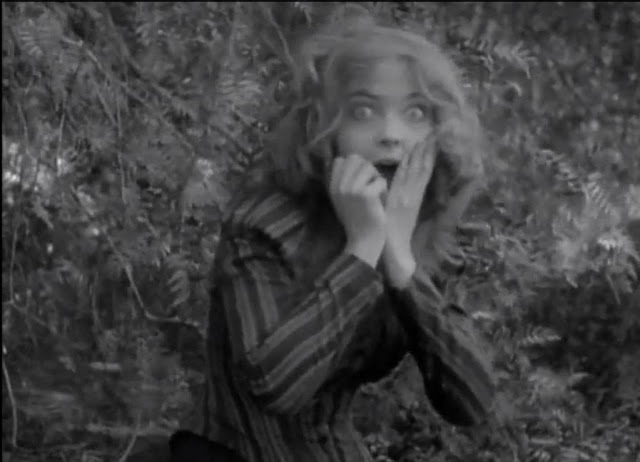 (Note: This review is being re-posted with some additional thoughts as part of the Gish Sisters Blogathon, hosted by Movies Silently and The Motion Pictures)

Griffith’s rousing and exciting western adventure 2-reeler is a wonderful early example of the genre,
featuring some terrifically filmed battle sequences, a wonderfully exciting cliffhanger and a sensitive, heartwarming happy ending, the likes of which stands as one of Griffith's most fantastic endings.... an ending that makes me grin from ear to ear. The fact that the film contains a point of view decidedly centered around the experiences of a woman and some small girls makes it something of an early feminist western, positioning the female experience in the active role, rather than the passive, spectator role that they are so often relegated to, and in the process relegating the men here into almost comical inconsequentiality. It's also one of Griffith's best works prior to his longer films....filled with brilliantly executed cross-cutting and editing, magnificently staged action set-pieces and a very densely plotted 2-reels, not to mention a fantastic performance from Lillian Gish in one of her earliest roles.

This short film features a plucky and expressive Mae Marsh as Sally, who with her younger sister is sent west to live with their 3 uncles. As part of their luggage, they bring 2 young puppies with them. On the same stagecoach is Lillian Gish as an unnamed mother who is traveling with her husband and their young baby to the same town where the girls are to live. The girls worry about their puppies, whom their Uncles say must live outside the cabin. Some Native Americans happen to steal the puppies for food. But Sally, in a fit of crazed mania, chases after them, snatching the puppies from their clutches, and even knocking one over in the process! The Uncles intervene, shooting one Native American dead. The other returns to the tribe and convinces the tribe to attack the settlers. During the ensuing battle, Gish's baby ends up in the wrong hands during battle and winds up on the battleground outside the Uncle's cabin. Gish finds herself in the cabin with the men and the young girls, while she frantically worries and searches for her baby. Sally, in a fit of "heroine-ism", steals away through a trap door in the back of the cabin, crawls across the battlefield, scoops up the baby and returns to safety! At the end of the film, all is right with the world, the mother’s worries are gone, and Sally is a heroine.

This film is so much fun. I love the distinctive focus on the concerns of the children and the mother. The men are relegated to the place of spectator while the girls and the mother propel the plot onward. It’s a refreshing sort of plot, filled with Griffith's usual melodrama and sentiment, but it’s enacted with a sort of confident understanding of this POV, and doesn't look back. Gish is fantastic in her brief role, those familiar wild eyes flaring as she searches for her baby. It's actually quite remarkable that she already at the age of 20, and in only her second year of acting had such a command of her emotions in front of the camera. My single favorite moment is that wonderful look on Gish's face as she sees Sally and the kids pop their heads out of the chest. Her expression is so naturalistic, joyful and emotive. It should be no surprise that Griffith’s portrayal of the battle sequences is particularly well done, filmed far enough back to allow the scope of battle to unfold with usual flair, and including some terrific combat elements in more close-up moments. It's almost astonishing how exciting these combat elements are here in 1913. As one of Griffith’s early masterpieces, the film stands as not only one of the best westerns of the silent era, but also a slice of life that’s key and essential to the genre, encompassing and examining the existence of women and children and showing their experience with compassion. This was the last silent western that Griffith would make and it's just about perfect.

The film can be viewed here....
http://www.youtube.com/watch?v=DrpNwNNspsk

Then Griffith was racist, feminist, pro-native...? Maybe bipolar xD Anyway, that is very interesting. It seems that the Griffith's world extends beyond 'Intolerance' and 'The birth of a nation'. However, honestly i must confess that i avoid his films when i see works of the silent era, perhaps because the twenties appeals more to me, more than the prior decade, which Griffith always belonged, not like Chaplin, who was more young. Besides, i hate this organ 'soundtracks' xD

Thanks for your comment. As for the organ soundtracks, I just mute them and don't bother. Griffith's works definitely extend beyond Intolerance and Birth of a Nation. I find Birth of a Nation difficult to watch, but most everything else of his is quite fascinating and excellent stuff. Particularly anything with Gish in it, whom I think might possibly be the greatest actress who ever lived. I encourage you to try some of them out.

I'm glad you wrote about this movie. As one of the commentors said, "Griffith's world extends beyond 'Intolerance' and 'The birth of a nation'." That's right. The Biographs are full of wonders. This movie is almost unbearable to watch while the baby is in danger. Thank you for sharing.

Wow! Sounds like you had a blast watching it and your enthusiasm is infectious. Excellent point about the focus on women and children as participants rather than spectators. Thanks for the great contribution to the blogathon!

My list of films to watch is only growing with this blogathon. Considering it's a short film, I believe I'll watch it soon. Great article!
Don't forget to read my contribution to the blogathon! :)
Greetings!

And yet another beautifully-written review on a Griffith rarity. Your scholarship here is remarkable, Jon.

I love your enthusiasm for this film. It certainly sounds like Mae Marsh and Lillian Gish have strong characters. The portrayal of women in is something that often grates on me. Obviously it was more of a reflection of society than something that was exclusive to films so I’m interested to see this portrayal.
Thanks for sharing your thoughts (and the link!)

This early Western sounds very interesting - thanks for supplying a link to watch it, Jon. I definitely need to catch up with more of Gish's films and will be checking this one out.

Thanks for all the comments. It's great that this little film is on YouTube so more people can have access to it. @Girlsdofilm - Yes the portrayal of women in westerns leaves a lot to be desired, but I have begun finding films that correct this. Check out this interesting silent 2-reeler called A Woman's Vengeance. It doesn't have Gish in it of course but it's quite interesting.

Ooh, thanks for letting us know this gem is on YouTube. I have bookmarked your page so I can watch it later.

I really enjoyed your review and, as Fritzi said, your enthusiasm for this film.