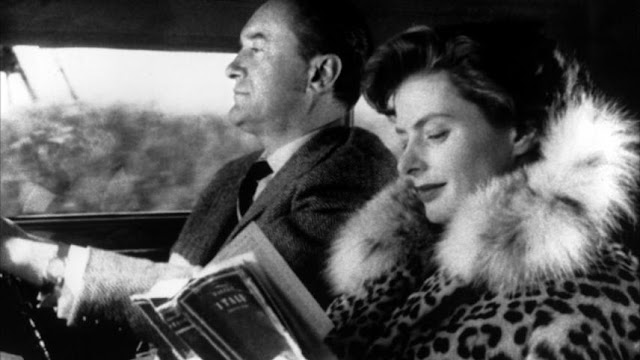 Journey to Italy is thought of in some circles as one of the truly great films. Of course the Cahiers du Cinema crowd hailed back in 1953 as the harbinger of something new. Even in last year's update of the Sight and Sound poll, it placed at #41, in the top 50 Greatest Films of All Time list, ahead of several canonized masterpieces like Play Time, City Lights, and Ugetsu. It in fact was Rossellini's only film that made the top 100, placing ahead of other films of his like Rome Open City, and The Flowers of St. Francis among others. I've watched the film twice over the last couple of months. The first viewing I responded well to, but felt like something was missing in the final 15 minutes. A second viewing opened up my appreciation to the film even more and I felt like I finally comprehended the undercurrents going on in the film. I'm not so sure it deserves to be mentioned above some of his other great masterpieces, but it's a masterpiece in it's own right. 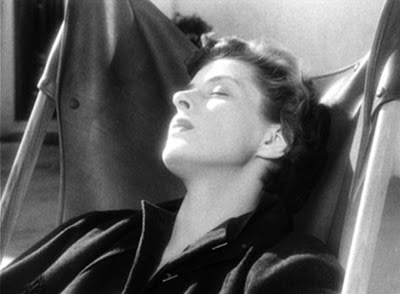 If Stromboli strikes us today as Rossellini's infatuation and developing love toward Bergman, then Journey to Italy marks a strikingly bold attempt to convey marital discord. Perhaps due to his own failing marriage to the actress, the film parallels their real life struggles by examining two characters, Katherine and Alex Joyce, who have been married roughly about 8 years, who have had no children, and have found themselves traveling down to Naples to deal with some family business. Along the way, they've entered a period of stasis and carelessness toward each other's feelings. They are callous and coarse with each other, and when she decides she wants to begin touring the nearby artifacts and historical sites, he wants nothing to do with it. In a fit of frustration, Alex decides to leave the villa where they are staying to go to the Isle of Capri for a couple days while Katherine continues to tour the relics and art museums. He returns a few days later whereby they both proclaim they want a divorce. In the film's final moments, their intentions and devotions are called front and center. 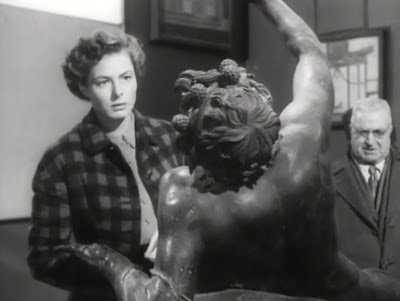 There's one thing you're going to have to get over if you're watching this film, and that's the dubbed voices. Neither Bergman's nor Sanders's wonderful voices are heard in this film, because the entire film is subtitled in English while the film is spoken in Italian. It's a shame that somehow the film couldn't have been written with their English language being chosen as I think there's something lost when you don't get to hear the actor's inflections and nuance of voice. However the film becomes often about the face instead and I find that the less I focus on how they're saying things, I can focus on what their eyes are saying. Both Bergman and Sanders give terrifically subtle performances here, and particularly Bergman is looking so much older than just 3 years ago in Stromboli. Here her hair is cut short, and there is a wisp of gray showing, and her features are harder and more pointed. She is given the air of a woman well past her prime, and filled more with regrets about the past than optimism about the future. Rossellini's script, just as in Stromboli, allows Bergman time to wander.... this time among the actual relics and sights around Naples. Having Bergman walk among statues and catacombs gives the feeling that time never ceases, that death is imminent...that all things must pass and come to an end in this life, and in particular, the sense in her case that she has wasted this time that she has been given. In particular there are 2-3 moments in the film where there is the indication she regrets not having any children, that there is nothing for her to pass along to ANYONE. There is a quiet despair on display in this film, and there's also a coldness here. Those smooth marble statues staring back at the camera literally give me the creeps. 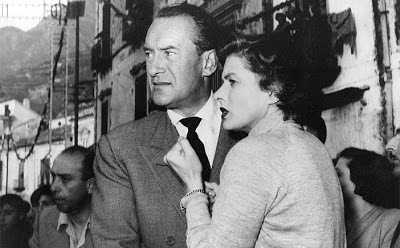 The key difference for me in finally "getting" this film was understanding the conflicting intentions of our two lead characters at the end. Alex returns from his frolic on Capri, WANTING Katherine to feel like he has slept around with other women (even though he hasn't). She wants him to THINK that she hasn't missed him at all while he's been gone. She feigns not caring. There's that key moment when he has returned to the villa and has said good night to her to sleep in his own room. He returns to the living room and reminds her he doesn't want to be disturbed, and makes a particular point of reminding her that he hasn't had much sleep lately, even though we know it's a lie. He is distinctly trying to hurt her and make her think that he doesn't love her anymore. Much of the final third of the film must be spent trying to understand the fact that these two characters are doing and saying things completely opposite to what they actually want. They really want to love the other, and they want the other to love them, but neither of them want to show or admit to the other that they still love the other. It's a very complicated emotional process to be able to portray this to the camera, and for some reason, it took me two viewings to understand this. All of this comes into play in the final moments when the couple is reunited in love and understanding and each finally admits they love the other still. But if you haven't followed the delicate game they've been playing with each other, the ending seems rather trite. When you view it understanding they've been aching to admit their love to each other, the final moment comes as a terrific release. Rossellini's compassion and humanism is always on display in this film, but it also feels very personal and intimate, which are sometimes not things I feel when watching his other films. There is something painful he's trying to express here and he does so with beautiful poignancy, and aching hope. He and Bergman, though, would divorce within 3 years of the release of this film.
Posted by Jon at 7:00 AM

I too quite liked Journey to Italy, though, unlike you, I wouldn't call it a masterpiece. But yes, its restrained portrayal of a fast-collapsing marriage was very well done. As it turns out, this is the only Rosselini film that I've watched so far - need to correct that sooner or later.

Wow that's a tough first Rossellini film to watch. It's possible you might come back to this one someday after you see the others. I've seen almost all of his works at this point and he's one of my favorites. Have fun digging into it! Thanks for the comment!

Agree that the dubbed voices are problematic here Jon, and I do feel the film should not rate ahead of some of Rossellini's greatest films, a few of which you've reviewed here over the past weeks. Definitely a seminal work of marital discord, and you do a great job here getting under the character's skin!

Thanks for the comment Sam. It's very interesting that it ranked so highly in last year's sight and sound poll.