A Woman's Vengeance (circa 1920) - Directed by Harold Moody

(Note: In honor of Wonders in the Dark and their upcoming Top Westerns Countdown, I will be spending the next few months reviewing westerns.....some you may know, and some you might not.) 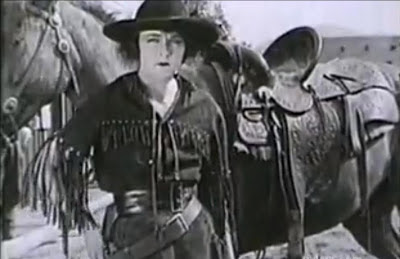 In one of the great, fascinating early western two-reelers, we find a film that not only reverses typical gender roles found in western cinema, we also find that it’s done without any sense of camp. This film, apparently directed by someone named Harold Moody, and apparently directed sometime around the year 1920, is one of those little gems, that makes you stop and contemplate what you know about the western genre and makes you realize that people have been making "revisionist" westerns from the get-go. There’s very little information out there about this film in the blogging world, but it’s about time we discussed films like this as it helps us to have a better grasp of the genre as a whole. And although there’s a bit of missing footage toward the end, there’s something fantastic about this little film.

In this silent short, Fritzi Ridgeway plays Nell, a gun packing sharpshooter who has been taking lessons from her friend Dick. Her father has a run-in with a local gang who harasses him and Nell finds her father lying dead on the road and swears revenge. She hunts down her father’s killer, challenging him to a draw in the street ("You murdered my father. DRAW.......DRAW!"). First he declines, but as she walks away he reaches for his gun, whereupon she whirls around and blows him away. Oh but that’s not all! Nell goes after the rest of the gang, gets shot in the arm and is bloodied, but not too wounded to save Dick  from his impending death by watery grave in the cliffhanger finale.

It’s refreshing to find a feminist western from this long ago. Fritzi’s Nell is a confident, hard charging woman, with no fear whatsoever of taking on men in battle. This reversal of roles with the female taking on the typical male-dominated role of gunfighter or revenge seeker is something rarely seen ever again throughout western cinema. Yes, Johnny Guitar famously has some strong gender reversed female roles that play against stereotype. And of course there’s the Sharon Stone flick, The Quick and the Dead, Raquel Welch in Hannie Caulder and Jane Fonda in Cat Ballou, however back in 1920, the spirit of the portrayal is done with utmost sincerity, allowing Nell to play a true heroine. Instead of the meek, virginal western town woman, Nell is the aggressive, sharpshooting, vengeful killer. She even falls off the side of a cliff holding her shotgun and gets up and staggers away! A Woman’s Vengeance is the kind of film that needs to be seen to be believed. It is a work that bucks genre stereotypes and stretches what I think I know about the western. True, though it's technical merits are not anything to write home about....it's the ideas therein that make it fascinating to me.

And there's also WESTWARD THE WOMEN in the western feminist pantheon, which is a film I know you liked quite a bit Jon! Well, this is the first time I watched A WOMAN'S VENGEANCE, and I must appreciate both the you tube link and the WitD acknowledgement. Yep, there is less camp in the earlier films, as we can even see in Ford's earlier work. Like you I appreciate the ideas which led to more fleshed out examinations of the roles, and even with the antiquated technical aspects, it's most engaging to watch. Great addition to the genre, and kudos to you for your boundless enthusiasm and excellent review!

Hey thanks Sam! Yes it's an early version of films that would come later and so it appeals to me for historical reasons especially. Westward the Women certainly fits into the feminist western pantheon like you said and I've penned a piece on that one to come. What I like about this one is that she's a gun-woman....meaning she packs a gun and isn't afraid to use it.