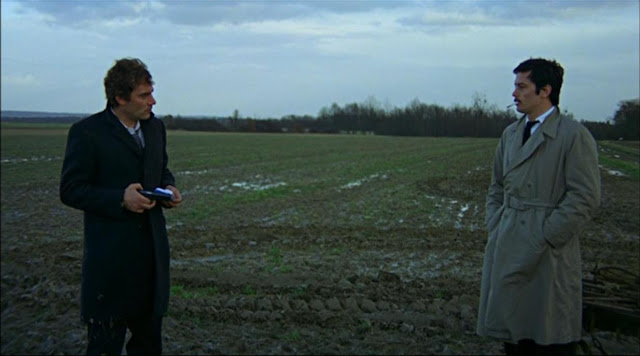 This film contains such an overwhelming sense of foreboding that even from the early frames one can sense the doom washing over everything. One feels that the churnings and machinations of the people in the film are sort of like a mouse on a wheel, that they will work their tails off and yet end up right where they started….or perhaps worse: that they will succumb and be imbibed through the mouth of fate, which will yield all of their efforts null and void. The fact that Jean-Pierre Melville is able to take such a tone and infuse it with poignancy, suspense, and a respect for the art of devotion is remarkable. He is one of my favorite directors. 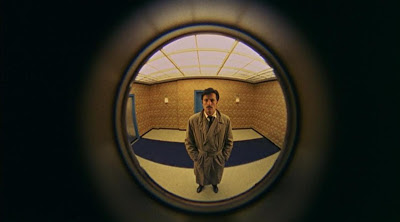 Le Cercle Rouge is Melville’s penultimate capstone to a career which has come to define neo-noir for me. His existential takes on the heist and the hit-man are absolutely essential cinema and have come to influence anyone from Michael Mann to Nicholas Winding Refn. His style of reducing cinema to observation (a la Bresson) is put to wonderful use as the observance of craft becomes elevated to a zen-like experience. Le Cercle Rouge stars Alain Delon (who makes smoking a cigarette a must-see event) as Corey, a just-released ex-con who has been tipped off by a jail-guard to a huge heist opportunity. Corey’s path crosses the story of another, named Vogel (Gian-Maria Volonte), who is a just-escaped fugitive who is being tracked across the countryside. Vogel climbs into Corey’s trunk of his car, almost like Vogel is incubating in Corey’s “womb” and the two form a bond. It appears that each of them sense a portent connection. Is it fate that draws them together? The film seems to enact not a sense of coincidence that they are together, but a sense of determined purpose, like this is MEANT to happen. They hold up in Paris, as Corey begins to flesh-out the details of the heist. They turn to Vogel's old friend, an alcoholic ex-cop named Jansen (Yves Montand) (who also happens to be a crack-shot and ballistics expert), to assist them in their quest to rob a high-end jewel gallery. We also follow the exploits of the police investigator Mattei, a man far too uncool for the likes of Delon, but whose chief inspiration is to not only find the fugitive, sniff out the heist, but also to wreak havoc on us, the audience with his ability to foil and outwit the crooks who we are rooting for! The rat bastard! 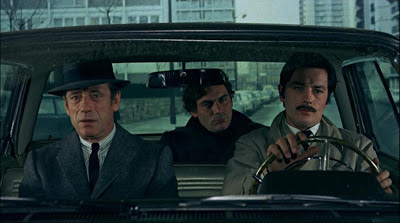 I won’t pretend to beat around the bush. This film is cool. It’s not over-the-top cool, like his Le Samourai, but it’s utterly stylish, devoid of trumped-up drama, is silent most of the time, and lets the images speak for themselves. Above all, it’s a man’s world, where to find sense in this world, one must have a purpose and craft that one excels at. Our three crooks are either at the end of their rope, or have very little going for themselves. They have a predilection for finding trouble. It’s almost like they don’t really need this heist for the money, though. They need it for validation of their own selves…their own self-respect. Some men are accountants, some salesmen. These guys are crooks.  They pour as much thought and devotion into their heist as anyone would to something incredibly important to them. Melville similarly devotes a religiously observed portion of the film to the heist itself, which goes on for nearly a half hour of running time, most of which is incredibly silent (taking a page from Dassin). In fact the entire heist itself achieves the on-screen artistry of something like a beautiful song-and-dance routine, or a terrifically choreographed fight. We have the balletic movements, the attention to detail, the cause and effect relationships. There’s also an implied deduction that the audience must make at times, because slightly out of the usual order, Melville does not directly implicate us in all the details of the heist itself. Many heist films (a la schlock like Ocean’s Eleven) make it almost too fine a point to include the audience in EXACTLY everything that will happen and when it will happen. Melville understands we don’t have to know as much as the characters do to enjoy the heist scene. We watch and observe, without the burden of pre-anticipation. 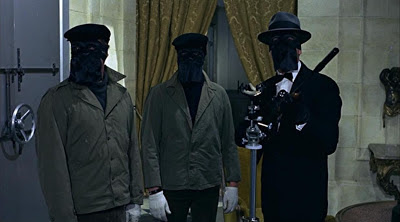 If the film is also gorgeously cruel, it’s that ending where our crooks must look fate straight in the eye. Why must Melville remind us that our sins will find us out? Why must Melville remind us that those who risk much to gain, must also risk much to lose? Why Why Why? Melville is too smart to allow these guys to get away with it. Why pander to an audience that is craving for our protagonists, these crooks, to achieve some sort of immortality through their heist? Because life doesn’t work that way. As Elliot says in E.T., “This is reality, Greg”. The difference between great directors, and directors in title only, is that the great ones refuse to budge, refuse to pander, refuse to acknowledge that they MUST do something a certain way. Melville consistently throughout his career was almost fashionably in love with the concept of doom and foreboding. Like I said, from the early frames of this film, one feels the pull of death. It was there from the start. To betray this would be to betray the intent. Melville was like a rock. He was not going to budge.
Posted by Jon at 7:00 AM

Jon, like you I'm a big fan of Melville. His films ARE a virtual definition of neo-noir, updating the look but sacrificing nothing of the fatalistic spirit of the original. My favorites are "Bob le Flambeur" and "Army of Shadows." I know the latter is technically not neo-noir, but as David Thomson points out, in that film Melville turns the underworld of his neo-noirs into the French underground of WWII. I like this film very much too although technically it seems slicker than usual and the long, silent heist, while brilliantly realized, seems overly familiar. Of the actors, I especially like Montand, who turns in a memorable character performance.

Melville is not a showy director who draws attention to himself and his technique. Yet there's a certain sensibility that carries over from one film to the next, and I think you identified this with your recurrent references to the foreboding atmosphere found in his work. I especially liked your comments about Melville using the camera as a detached observer, and also the way his films deal with a man's world.

Yes R.D. thank you for reading this and for commenting. I do like Army of Shadows and it certainly transports the feel of Neo-noir into a different type of plot. I love most of his films including the underrated Le Doulos and Le Deuxieme Souffle as well. I suppose I know what you mean about the heist scene...although I like it better here than in Rififfi actually. Thanks again for checking in here.

My second favorite Melville after Army Of Shadows. This film certainly exudes coolness and a metronomic rhythm that I find intoxicating. Great essay Jon. I'm still undecided over what I'll be picking for the 1970 poll... it's a two horse race between this and The Conformist...Maurizio Roca

Hey thanks Maurizio! I do know that you really like Melville. Me too. For 1970 I believe I'll definitely be taking this one. I like what you have to say about the rhythym here. It is palpable.

"This film contains such an overwhelming sense of foreboding that even from the early frames one can sense the doom washing over everything."

Touche! That was essentially the feel I go when I'd watched the film, and I'm sure that would hold true for others as well - as that's how Melville himself had possibly planned the film.

My favourite Melville, like Maurizio, Finch & you, is Army of Shadows - which is interesting given that Melville, as you ovserved, was known mostly for his neo-noirs. At least, if not a neo-noir, it was drenched in existentialism & an all-pervading sense of fatalism - two aspects readily found in his body of work. Just as an aside, I quite like Bob le Flambeur too, but I'm not that fond of Le Samourai, easily his best known work.

Most of the memorable heist films made over the years, almost as a rule, end on a bad note for their amoral anti-heroes; yet the charm, the cool, the fatalism, the existentialism and the seedy underbelly depicted in them, invariably make them fascinating.

All the four acting leads (yes, including the cop who, from an emotional standpoint of the audience, was clearly the villain of the story) were instrumental in highlighting the story's theme & tone, but Delon & Montand quite easily were the ones who stole the show.

Ever since you'd mentioned that you're planning to post your review of this film, I'd been anticipating a write-up as this every but as wonderful as the one you've penned here :)

Hi Shubhajit! Thanks for stopping by and commenting. I do know that you like this film alot and also others of his. There is hardly a film by him that I do not like in some fashion. Army of Shadows is probably his darkest work and one I need to see again rather soon. It is about as bleak as anything he made. I do agree the acting here is topnotch even though the acting in Melville's films sometimes takes a backseat. I do like Le Samourai a lot more than you, although it does have an Iconic-ness that perhaps is a bit distancing for some. I do love it though.

Funny enough Bob Le Flambeur is one of my least favorite Melville's. Overly sentimental and without the directorial and pacing chops of his latter films. It actually feels really antiquated when compared to what came later by the director. Even Dassin's Rififi puts it to shame in the same year. I think Melville made four masterpieces in a row... Le Deuxieme through Le Cercle Rouge and one near masterpiece with Le Doulos.... Maurizio Roca

Maurizio I do well like Bob Le Flambeur....there is a pristine sexiness and attitude about the thing...but it's on a different plane than the later works. From Le Doulos through Le Cercle Rouge, you're right he was in the zone.

Obviously I am a Melville fan, I'm sure its been said before. I too saw this one again in December and loved it more than the first watch. The way he takes Dassin's beautiful heist and perfects it is reason enough to place this high in the great ranks of crime film but Melville's use of the camera (as you mentioned) cements that place.

My one problem was that it felt too long by about 30 minutes actually, perhaps that was intended but it left me exhausted being slowly dragged towards the inevitable conclusion.

On the subject of Bob le Flambeur I unashamedly prefer The Good Thief.

Also as a Melville fan how do you feel about Michel Keaton's The Merry Gentleman? His use of silence is just one of the obvious Melville references throughout.

Hey Toby...sorry it took me awhile to get to your comment. Thanks for stopping by. Not sure the length bothers me. I feel like the pacing is right for me. I have not seen The Merry Gentleman but I have not doubt that Melville would have some influence over it. He has influence over a lot of different directors.