Note: This review of Duck Soup appears at Wonders in the Dark as part of the Top 100 Comedies Countdown, coming in at #4. 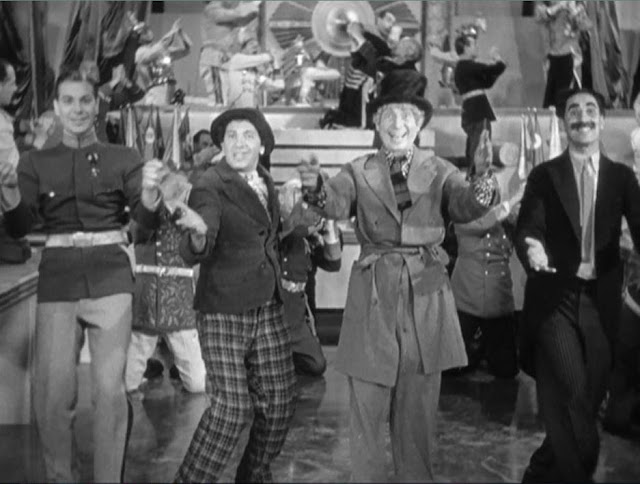 At my parent’s house in Chicago there is this photo album with a slightly yellowed and faded photo. In it, is an image of a small boy, about age 4, who is holding an RCA videodisc in his hand. It is a copy of Duck Soup. He has a beaming smile. Yes….that was me. It sometimes strikes me as I look back at that photo and realize how much that film and the Marx Brothers have meant to me throughout my life. Back then, we would go visit my grandparents in Davenport, IA and my uncle would come over to visit in the evenings. He had an RCA videodisc player which he would bring over. He had a remarkable collection of titles. We would watch Shane, The Great Escape, The Bridge on the River Kwai, The Treasure of the Sierra Madre, among many others. He also had The Marx Brothers, who were my favorite. He had Animal Crackers, A Day at the Races, and what I consider their best film and a landmark of comedy…Duck Soup. My brother and I would sit down in my grandparent’s basement watching these movies and laughing our heads off. This routine went on for years. 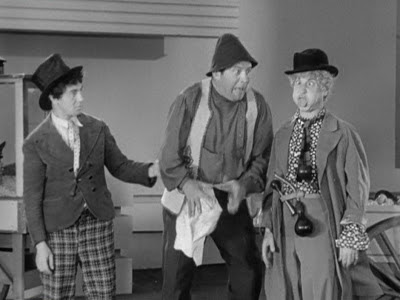 One of the great things that I’ve realized through my many years of watching The Marx Brothers, is how well the comedy can play to different ages. When I watched Duck Soup as a small boy, I was completely infatuated with Harpo’s antics. His pratfalls really need no translation. As I got a bit older, I began to understand Chico and his malapropisms, the way he would botch particular words certainly made sense to my 10 year-old noggin (and made me laugh). Now that I’m older, I am able to get Groucho’s rapid fire sexual innuendos and one-liners. When you put all of this together, you have what I would consider the most varied, wide-reaching form of comedy and probably the birth of the modern comedic sensibility. I’m not sure that any single comedian, director, or comedy troupe can lay claim to the word “comedy” as much as the Marx Brothers can for me. They can probably be credited with creating comedy as we know it today, taking it from an era mainly focused on the stage, to the modern cinematic and television world. When you watch their films, you can feel an almost sitcom-like, episodic structure at times, and it’s clear that everyone from Lucille Ball to Woody Allen to the late night comedians felt their direct influence. Sure Chaplin and Keaton were masters….but silent film is a different thing altogether and I don’t even want to make the argument comparing them.  But, when I think of comedy, The Marxes are number one and Duck Soup is their supreme masterpiece….the one where the songs didn’t suck and the one where they pushed the boundaries the farthest. 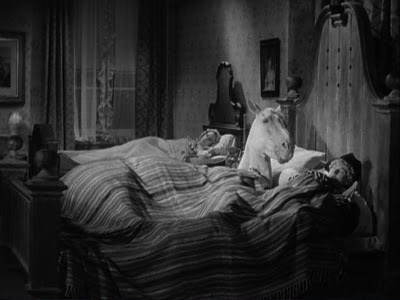 Rufus T. Firefly (Groucho) is appointed leader (dictator) of Freedonia by a woman named Mrs. Teasdale (Margaret Dumont) who is funding the country (seemingly on her own) to keep the country from bankruptcy. The leader of nearby Sylvania, Trentino (Louis Calhern) wants to take over the country, and in order to start a revolution, sends over two spies, Pinky (Harpo) and Chicolini (Chico) to spy on Firefly and find some dirt on him to….well I’m not exactly sure what they’re after but they certainly want to catch him red-handed! Rufus and Trentino soon begin to woo Mrs. Teasdale together and when Trentino calls Rufus an upstart (upstart!!!??), war ensues.  All of this is basically superfluous as the film mainly functions to allow the Brothers to enact all sorts of mayhem …..on women, political figures and dignitaries, lemonade vendors, soldiers, even themselves. 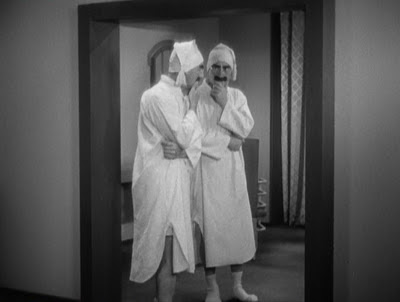 Duck Soup was the Marx Brothers most sustained bit of lunacy, and there are so many different kinds of comedy that one can find embedded within the film: slapstick, satire, silent-clown and mime, monologues, puns, pre-code shenanigans etc. There are as many different types of things to laugh at in this film that one can imagine. I think of three scenes in particular. One is the scene where Harpo and Chico befuddle and belittle the lemonade vendor on the street through a variety of gags. The lemonade vendor tries to tell them off because he says they’re turning away his customers. Soon enough, Chico bludgeons the guy with wordy absurd-isms, while Harpo frays his nerves with a barrage of physical torment. Another classic scene (perhaps one of the most iconic comedic moments in cinema), is the “mirror” sequence where Groucho stands in front of what he thinks is a mirror, when it’s actually just Harpo dressed up like him. Harpo follows Groucho’s every move, even down to anticipating nearly everything that Groucho does. Their physicality and comedic timing is really funny. But I also find one of the funniest aspects of this scene to be the way that Groucho’s iconic “look”, is aped by his brother. It’s all done in silence though, as if the sequence is straight out of a silent film. The final unforgettable sequence (and maybe their greatest 10-minute stretch that was ever filmed) is the inspired war sequence at the close of the film that plays as buffoonish satire, where in the midst of battle, every scene is rendered hilarious by the fact that Groucho has changed outfits…..wearing everything from Confederate Gray, to Russian Bolshevik, to Coonskin Cap! There’s even moments here where each of them (all four Marxes, as this was Zeppo’s last hurrah) is wearing a different vintage style uniform. It comes as perfect comedic timing when as they are throwing fruit at the newly captured Trentino, the upraised arms and lilting voice of Margaret Dumont suddenly causes the boys to throw their fruit in her direction instead. 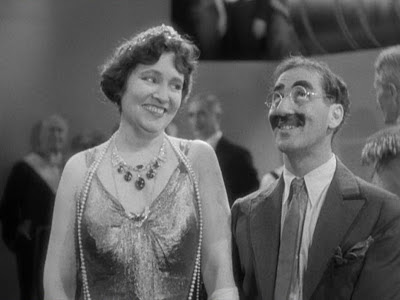 Oh but Margaret Dumont! Was there ever a woman so used and abused in the name of comedy!!!!??? I swear this woman was a saint, and probably the Marxes most unsung hero(ine) and one of the keys to their success. Most great comedians need a straight man (or woman), and Margaret Dumont was Groucho’s. Groucho could be wooing her with sexual innuendos and suddenly would turn on a dime and lay into her with put downs: “You haven’t stopped talking since I got here....were you vaccinated with a phonograph needle?”. “I can see you bending over a hot stove….but I can’t see the stove.” Dumont somehow made Groucho’s occasional mean-spiritedness seem justified, as if she needed a comeuppance due to her rather prudish lifestyle. But there would be those moments when you would believe he saw her as the most beautiful woman in the world. It wouldn’t last but a split second, but it was there nonetheless. It was the speed at which Groucho would change his tune, though, that would make their interaction so magnificent….and it would be as if she didn’t even catch the jokes. Groucho apparently considered her to be the “5th” Marx Brother. That’s how important she was. 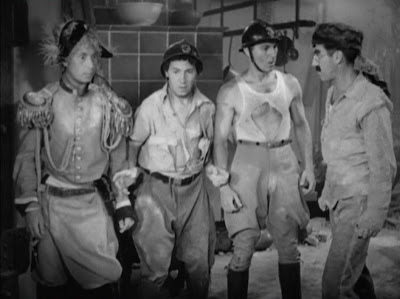 Many of the Marx films have memorable sequences: The Viaduct Scene (The Cocoanuts), The Letter Dictation (Animal Crackers), The Swordfish Scene (Horse Feathers), The Stateroom Scene (A Night at the Opera), Tootsie Frootsie Ice Cream (A Day at the Races). But Duck Soup not only has the great scenes but the biting social commentary to boot. In the Depression Era, for Groucho to be making jokes about war ("You're a brave man. Go and break through the lines. And remember, while you're out there risking life and limb through shot and shell, we'll be in here thinking what a sucker you are.") and taxes ("The country's taxes must be fixed and I know what to do with it....if you think you're paying too much now just wait till I get through with it."), it is pretty biting. It is well known though, that the film didn't do as well at the box office as their previous hits and Paramount ended up dropping them. They were never able to duplicate this satire again once they signed with MGM, where they aimed their venom at a much more benign form: The Opera. All of us have certain films that we are very biased towards. This can happen for certain reasons, but for me it’s very hard to view this film objectively. Seeing it at such a young age has ingrained it upon my brain and in some ways, it is probably this film that began the lifelong cinematic journey that I am on. I think back on that picture of me now and all I can say is…. “Wow that kid had great taste in movies.” 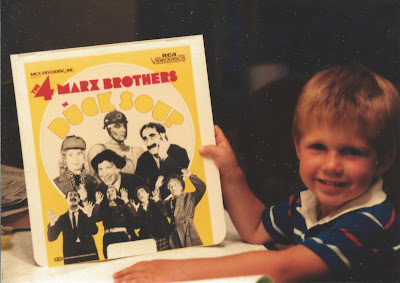 That picture! You were such a cute kid :-) I remember watching clips in Papa and Nana's basement