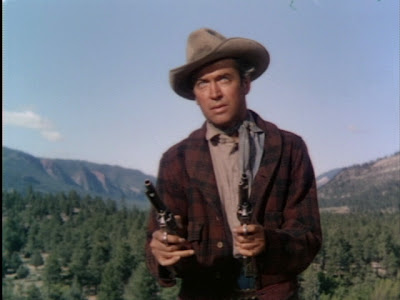 If the Western genre is considered John Ford’s playground, then it has to be Anthony Mann’s back-alley. Taking the economy of storyline from film noir, and infusing it into the Western, Mann makes the West into a lawless, seedy place, strewn with boulders, snapped pines, rivers raging beyond passage, and no heroes in sight. His collaboration with James Stewart on five Westerns in the 1950’s should rightly place alongside Ford’s partnering with John Wayne as the greatest tag-team duo in the history of Westerns, with Leone-Eastwood taking home a door prize. Compared with Ford’s poignant and often sentimental Westerns, Mann’s films are taut, dark and realistically violent, providing a unique contrast to that most American of genres. 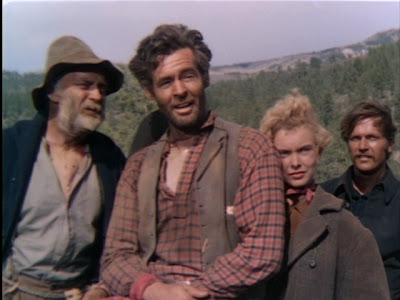 The Naked Spur is probably Mann’s greatest Western, and features the epitome of his style in the genre. We’re introduced to Howard Kemp (James Stewart), who might as well be a “Man with No Name”, tracking a wanted killer, Ben Vandergroat (Robert Ryan) through the Colorado Rockies. Stewart is a bounty hunter, desperate for the $5,000 reward for some reason we’re not initially made aware of. Mann’s film is coy about his motives, but we realize that Howard is a cold and dark being. He happens across Jesse Tate (Millard Mitchell), a gold prospector, whom he pays to help him pick up the trail where he lost it. Soon, they find Ben, and with the aid of disgraced Union Soldier, Lt. Anderson (Ralph Meeker), they are able to catch Ben at the top of a cliff after a brutal struggle to reach the top. When they do, they also find Ben has a woman with him, Lina (Janet Leigh), who is the daughter of a deceased friend. Of course the crux of the psychologically fraught film is that Howard now has two other fellas with him that want to share in the reward they feel they rightly deserve for helping to catch Ben. Ben rightly assumes he has a better chance of getting free if he turns each of the men against each other, by playing on their greedy desires. Furthermore, Ben convinces Lina that she use her sex appeal to get between the men and stir up dissent. 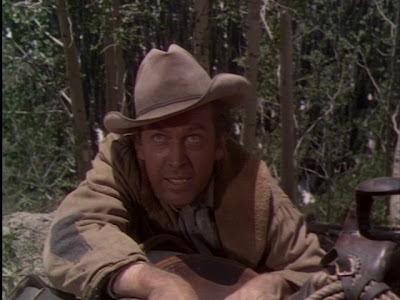 Mann’s film was shot nearly entirely in the high ranges of the Rocky Mountains of Colorado, eliminating the wide open spaces of so favored by Ford, replacing them with steep cliffs and boulders, dense forests and forbidding rivers. It seems at every turn, the party is faced with some natural deterrence, further highlighting the psychological obstacles and tensions the team faces by directly paralleling the landscape to the psychology. Stewart also probably spends more time rolling in the dirt in a fist fight than actually on his horse. He’s also shot, rope burned, gets a fever and night terrors, and routinely is disturbed by thoughts of his past. We learn in the middle of the film, that he was betrayed by someone, leading him on this quest for money. It’s the one shred of background information provided to us on his character. There’s little exposition provided, and as I mentioned the economy of storyline is one of the film’s attributes, something that the other Mann Westerns share in common. 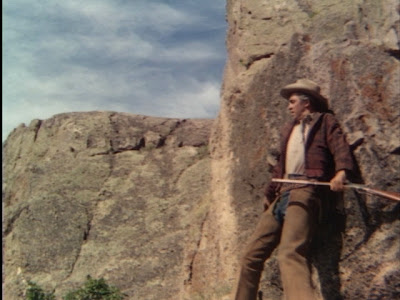 Stewart’s Howard presages the revisionist Western characters that would populate the landscape in the coming decades, making protagonists into anti-heroes with deep personal flaws, or just plain cold-blooded killers. Howard Kemp is a desperate and ugly man on a mission. Stewart’s performance is tough and grizzled. There’s definitely a bit of Howard Kemp in The Searchers' (1956) Ethan Edwards. Robert Ryan is also memorably snarky as Ben, one of the best villains in the history of Westerns as he plays games with his captors, turning them against each other. He’s funny, evil and terribly clever in this role. But this is Mann’s show, as his taut and tough directing style perfectly establishes the correct point of view for this story, which penetrates deeply and remains quite fresh today. In fact, although John Ford is probably considered the established voice of the American Western, I wonder whether Mann consistently represents the more realistic portrayals, filled with greed, fear and obsession, lacking in sentiment.
Posted by Jon at 6:00 AM

"If the Western genre is considered John Ford’s playground, then it has to be Anthony Mann’s back-alley." What a wonderful way to start your review, Jon! That's certainly one of the most brilliant opening lines I've come across.

Naked Spur sure remains a delicious & an immensely enjoyable Western, filled with amoral characters, underhand deals, and crackling action. And yes, as you mentioned, the physical obstacles faced by the characters did further accentuate their psychological states.

Speaking of Anthony Mann, how about you rank all the movies of his that you've watched so far. I've watched only 3 of his movies - Naked Spur, Raw Deal, and T-Men, and so it would be great to know where to go from here.

Hi Shubhajit! Thanks for your great comments. If I'm going to rank his movies that I've seen, I would probably go like this.

I really like all of those. I'm not a big fan of The Furies, and find it to be kind of an oddball film, but I know it has fans. Thanks Again!

This is indeed a film worth watching over and over. I like how you suggest the film noir influence on Mann's Westerns. Nice to see a post on this film. Well done.

Hey Hokahey! Thanks for stopping by and thanks for the great comment. Yes and the nice thing is it doesn't feel like Mann has to stretch real far to make his noir-like Westerns work. It just flows nicely and makes perfect sense. Bud Boetticher also made some very economical Westerns, but there was less of the darker protagonist in those films with Randolph Scott, who was generally a "good guy".

Great review, Jon! I really think this is one of the greatest of all westerns--it's so intense and suspenseful. I've seen Mann's Winchester '73, Bend of the River, The Man From Laramie, and Man of the West as well, but I think this is the best. The first three there are also stellar, but I really didn't like Man of the West, and don't understand people who call it a masterpiece. It's just too tortured and internal, with a strange situation that doesn't quite logically work--it ends up feeling a bit static for long stretches.

Anyway, I think you've got it right with your 1-2-3 ranking of Ford/Wayne, Mann/Stewart, and Leone/Eastwood, but I would give prizes to Boetticher/Scott and Tourneur/McCrea as well. Heck, I might even mention Ford/Fonda, who made at least 3 masterful westerns together, plus a few other classics.

Yes I actually haven't seen Man of the West yet, but I had heard good things....until now! Yeah Boetticher and Scott is an interesting pairing. In fact, I was watching a few of theirs recently. I think The Tall T is my favorite of theirs that I've seen so far and you're right, Ford and Fonda did some fine work as well! My Darling Clementine probably being my favorite there. Thanks for stopping by and the comments!

With the expansive settings Mann was able to achieve universality in theme. Jean-Luc Godard once wrote to this focus: “Mann’s westerns presented both beautiful landscapes and the explanation of this beauty, both mystery of firearms and the secret of this mystery, both art and the theory of art.” Mann’s westerns are generally seen to exist on three levels: the literal, the internal (or psychological) and the emotional, the latter of which is achieved by the shift in landscape, story and character development. The psychological state of the characters are of course exclusive to Mann in this genre, and for the audience the most fascinating aspect. The change in the landscapes reflect the state of mind for the characters. For example, THE NAKED SPUR, uses landscape to define the increasing psychosis of Jimmy Stewart’s character by darkening some backgrounds, increasing the denseness of rocky terrain, and having the rapids become more treacherous. basically, it can be rightly asserted that it is the way the character is placed within the landscape that gives the scene it’s interpretation or meaning.

You have framed this landmark film magnificently here Jon, and saying it's Mann's greatest western isn't much of a stretch. For me it's one of three with THE MAN FROM LARAMIE and WINCHESTER 73, two you subsequently put in the comment section in the top tier. But what a passionate, astute and descriptive piece you have penned here!

Hey Sam, thanks for your tremendous comment. I love what Godard said reagarding Mann's westerns, which is a highly articulate thought. I know well your regard for Mann and it is shared by many. I sometimes wonder where all these westerns we talk about, The Naked Spur, The Searchers, Shane, High Noon etc, would place in a countdown, something like the Musicals countdown you have put together. It would be fun to have that put together someday as I know the passion for westerns runs deep for many.

I'm a huge fan of this movie and love your essay. Only quibble -- I would never call Kemp ugly. Desperate yes, ugly no. When Lina offers to share her life with him, his reaction, "Why?!", is evidence of the coldness chipping away. When he finally screams "I'm gonna sell him for money!", he uses the words of an ugly man, but his eyes, those Stewart eyes, look inside, and he recognizes his own capacity FOR ugliness. He's been teetering on the edge of it for the entire movie. At last, Lina stands in for the love we all automatically have for Stewart -- she knows it's there, demands him to show his goodness, and is finally able to call him back out of his madness. Stewart's acting in these moments is some of the best of his career. What a movie.

Hi Robert, thanks for your comment. Yes we agree on desperate then! I'll take it. You're right though, Stewart's moments at the end of the film stand up with any moment of his in any film. I agree wholeheartedly. Thanks again!

Just re-watched this and agree it's a masterful film. [Too bad the Warner's transfer is not better.] But I would argue that while not sentimental in the borderline kitschy manner of John Ford's nostalgic folksiness, the final scene where Stewart breaks down and changes his mind about turning Ryan's corpse in to collect his bounty is profoundly affecting and packs a 'harder' emotional punch than anything I can think of in Ford's westerns.

The donkey made me think of Bresson's Au Hasard Balthazar. Its presence here is realistic-functional rather than symbolic, but evokes the innocent-victim theme. The music grows dense and full of pathos without over-powering the scene. Stewart prepares to burry the corpse. Then mounts his horse and rides off with Leigh into the future. The landscape, half-veiled by dark shadows, underscores the sublimity of it all. It's unbearably moving.