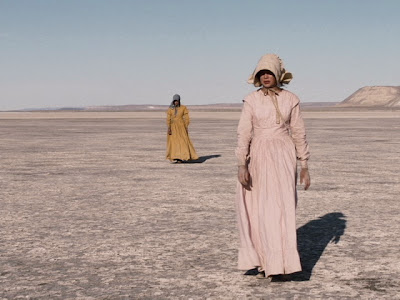 Tuck what is called Meek's Cutoff...a bad cutoff for all that tuck it. ...I will just say, pen and tong will both fall short when they grow to tell of the suffering the company went through.
-Samuel Parker, 1845

As Meek’s Cutoff opens, we see water. Cool, rushing water, providing a cleansing and peaceful sound. We see a group of pioneers trying to ford the river, up to the top of their wagon wheels in water. Up to their shoulders in water as they wade across, they linger nearby and fill up their buckets. They are lost, but at least they have water. Question is, when will they find more? Meek’s Cutoff is based on a true story that was documented in 1845 as a group of pioneers decided to hire Stephen Meek, a guide and trapper to lead them on a shortcut through central Oregon, to lead them to the Willamette Valley. He ended up getting them lost, wandering around the south-central deserts of as their water supply and patience wore out. 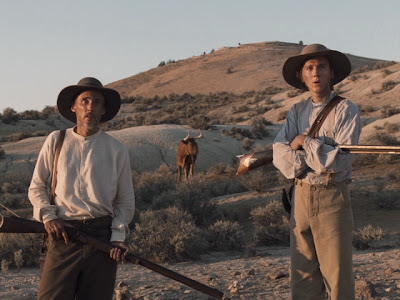 I consider myself predisposed to enjoy this film. Michelle Williams is just about my favorite actress working today, and Kelly Reichardt’s previous film, Wendy and Lucy (2008), was one of my top 5 films from that year. This film confirms what I’ve been noticing and that is she is one of the most talented and promising American filmmakers working today. She’s made three recent films, Old Joy (2006), Wendy and Lucy (2008), and Meek’s Cutoff that are all set in and all concern a certain wandering and searching. I think that she’s becoming increasingly assured in her abilities and the stakes have continued to increase in each film. Images throughout Meek's Cutoff are continually impressive, stark and realist. Yes the images are beautiful, mainly because it captures raw landscape. But the landscape is threatening and it’s as harsh as terrain gets, with no water in sight as our troupe walks across dry lake beds and dusty hills barren of any trees. 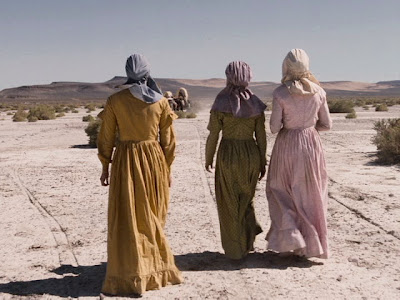 Williams plays Emily Tetherow, wife of Solomon Tetherow. There are two other couples with them, each with their own wagon. Emily Tetherow is a fascinating character to watch. Her stern and dirtied face is able to appear harsh and tough enough to compete with Stephen Meek, whom it’s clear she derides and blames for their plight. It’s also clear she holds some blame for the men in the troupe, as the women are never included in the discussions on what should be done with Meek and what they should do next. At one point in the film, the troupe captures a Native American and decides he might be the one to lead them to water. Emily does some kind things for him: feeding him, mending his moccasin, protecting his life. Yet it’s for realistic reasons she does this: She wants something in return from him and wants him to pay them back. I found this character development to be terrifically truthful. Williams plays the character straight and tough without a hint of weakness, able to draw a gun much quicker than the men appear able to. 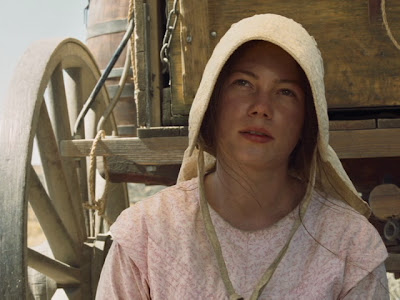 Much has been made of the fact that Reichardt chose to film in standard aspect ratio, rather than widescreen. I’ve read reviews that have commented on this by claiming that Reichardt achieves some sort of claustrophobic effect or profound tension through this artistic choice. I couldn’t disagree more. I maintain once the film starts, you forget the film isn’t in widescreen. If the argument is made that the aspect ratio here provides claustrophobia, then we should be saying that other Westerns like Stagecoach (1939) and Shane (1953) are as well since they’re in the same ratio, something I would find preposterous. It also wasn’t that long ago that we all had square TVs and watched pan-and-scan videos. Did it feel claustrophobic to watch films then? This is not to say the choice was uncalculated. In fact, what I think the ratio provides is more realism, which is essential to the film’s feel.  Widescreen photography lends to the greater capacity of creating compositions, and the wider the screen, the more elaborate the compositions can be. Compositions do not feel realist in principle, they can feel manipulative, as if the hand of the director or cinematographer can be felt as he placed everything just so. Having a smaller field of vision limits the potential for compositions and I think that’s why Reichardt chose it. I also think it’s effectively done and one of the reasons for the film's success. You will almost never see the groups of men and women framed together. They are nearly always framed separately, because the camera doesn’t allow them to be framed together. With the men and women often separated, it highlights how women were probably not included in these types of conversations that men had. As viewers, we’re often watching the film from the women’s point of view as we watch the men talking from a distance. Reichardt also places most of the film’s emotion, as little as there is, on the shoulders of the women. She clearly wants us to see things as they do. 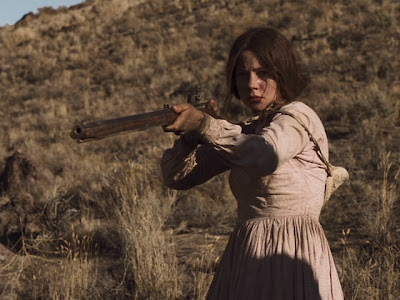 Meek’s Cutoff works so well because it’s such a deep meditation on quiet desperation. This film contains none of the tropes that cinema uses to trump up desperation or desolation, particularly in Westerns. There are no gunfights, fisticuffs, or even loud verbal wars between people. Mostly the film lingers on the mounting escalation of dread amongst the attempts at perseverance and hope. As things look bleaker and no water is found, hope begins to fade and desperation comes more to the fore. Yet it’s always restrained and cold, and the film forces you to stay in that place, providing no exposition or conclusion, confronting you with the eternal consequences of choice. In tone and execution, Reichardt’s obsession with quiet desperation seems to be her inspiration. It’s clearly what drives Old Joy and Wendy and Lucy, and is the main focus in Meek’s Cutoff. I’m reminded of the films of Ozu, Melville, and Bresson, but Reichardt is less interested in providing any redemption or conclusion to her stories. In more recent times, Van Sant’s trilogy of Gerry (2002), Elephant (2003), and Last Days (2005) are echoed a bit in Reichardt’s films, but again, Reichardt’s insistence on less cinematic intrusion and more realism separates her. This is a beautiful and memorable film from a unique voice.
Posted by Jon at 7:01 AM

Great piece here, Jonny. I've only seen this once to date, but it was on the biggest theater screen in my state, and I completely cherished the experience. I think only The Tree of Life could compete with it as the best new movie I saw this year, and it'd be close.

Names like Ozu and Van Sant definitely feel appropriate in the discussion, but for me Ford is the major touchstone here; there is a real clarity of form, an elemental approach to depicting movement and landscape and conflict in Meek's that strongly recall a handful of Ford's more distilled, abstracted Westerns - Stagecoach certainly, but also stuff like Wagon Master. It's a very classical picture, which of course goes hand in hand with the choice of Academy ratio, which I thought was used brilliantly. I can't wait to see it again.

Jonny, have you seen Reichardt's first feature River of Grass? It's well worth seeking out, though markedly different in many ways from the style she would begin to develop in Old Joy. I agree that she is one of the most interesting American filmmakers around right now.

Hi Drew thanks for stopping by and for your tremendous and thought provoking comments. As for her first feature, no I have not seen it yet, but it sounds like I would really enjoy seeing it. Interesting you noted it's vastly different than these later ones.

As for Ford, you have presented me a rather fascinating look at the film through this comparison. I must admit, no directors of Westerns particularly came to mind as I was watching this film for some reason. I'm not sure if it was because of the distinct sparseness, the lack of sentiment or what, but Ford didn't come to mind. However I'm fascinated when you say
"an elemental approach to depicting movement and landscape and conflict in Meek's that strongly recall a handful of Ford's more distilled, abstracted Westerns - Stagecoach certainly, but also stuff like Wagon Master." This I could actually see as part of your argument toward Ford that seems to really work. I think I would have to watch it again to fully digest this. I'm not sure if I completely agree that Meek's is a classical picture though. For me, there's too much realism here to really consider it a kissing-cousin to something like Stagecoach. But from a visual standpoint and connection to the land, I am seeing how this works.

From the start of this movie I was pulled in, so much so that I started to feel parched despite the fact that I had a glass of water by my side the entire time!

Hi Catherine! Yeah I know what you mean. The movie really makes you "feel" it.

This is a beautifully-written and pperceptive review. I'm not a big fan, but I know a number of people I respect (including you) that strongly feel otherwise. I felt that the physical look of the film was stunning, but it never seemed to get untracked. But I understand in one sense that's exactly the point in Reichardt's films. I liked WENDY AND LUCY, but didn't care much for her first film OLD JOY. I saw the film at the Angelika and was treated to a very interesting Q & A by the director. I'll take a second look at this one for sure.

Thanks Sam for your comments and I do know that you do not view the film as highly as some of us do. That would have been a tremendous treat to see the Q & A with Reichardt. I would have really enjoyed seeing that in person with her there. Thanks for sharing.