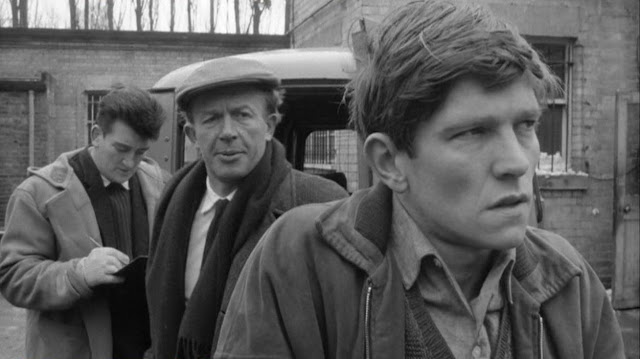 The Loneliness of the Long Distance Runner is Tony Richardson’s angst-ridden and beautifully shot masterpiece. Part of the “Angry Young Men” movement during the British New Wave, it is one of the best and most memorable of the lot. It was an influential film at the time and still works as a document of an era and of stream-of-consciousness storytelling, something that would become en-vogue during the New Wave era of the 60’s and beyond. Additionally, the wonderful use of hand-held camera and tracking shots makes the film visually alive and emotive. It also contains a brilliant early performance from Tom Courtenay as the troubled youth, lashing out and rebelling against family, responsibility, and compliance. 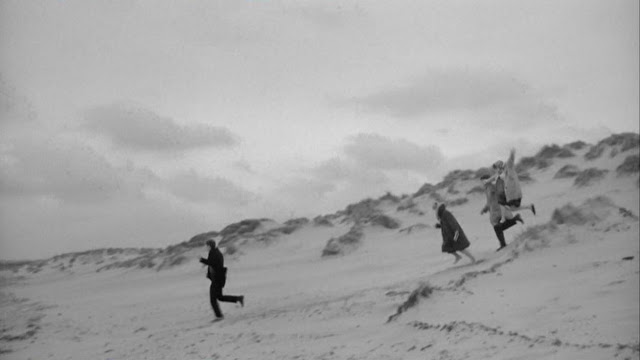 Tom Courtney plays Colin, a young man who has been admitted into a correctional facility for young men after stealing some money. His life though, has been spiraling downhill…..his father was ill and died; his mother quickly found another man with whom he has arguments with, he lives at home with several loud younger siblings, and basically has a hard time staying on the straight and narrow, rebelling against everything….his mother, the need to find a job, society itself. Once at the correctional facility he begins to develop a talent for running long distance cross-country. The Governor of the facility (Michael Redgrave) notices this and lets him have long jaunts across the countryside, with hopes this young man will be the winner at the cross-country meet that they will hold against a local, elite boarding school. 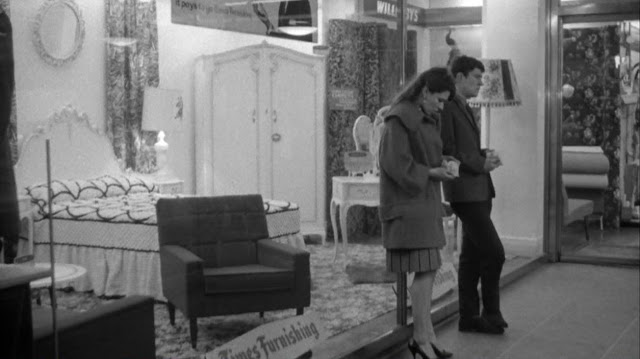 Richardson’s film bounces around in time and quickly cuts from flashbacks and memories to the present day and every which way, with quick edits and effectively stark black-and-white cinematography by Walter Lassally. There’s also a longingly romantic quality that the film has about it, with shots of bleak, barren trees and puddles of water reflecting the gray sky, mist hanging about…….. there is a longing and a yearning threatening to break free from every frame, just as Colin feels the need to find escape into something. His runs across the country are freeform. He streaks about and somewhat loose-limbed, runs with abandon until he can run no longer. These are his moments alone in his thoughts. There is something called the “runner’s high”, of which I have experienced on my own at times. You begin to not feel anything….your legs keep churning and pounding but you stop feeling it and you just go and keep going. You feel as if you could go on forever. But sure enough, reality comes back when the run is over. 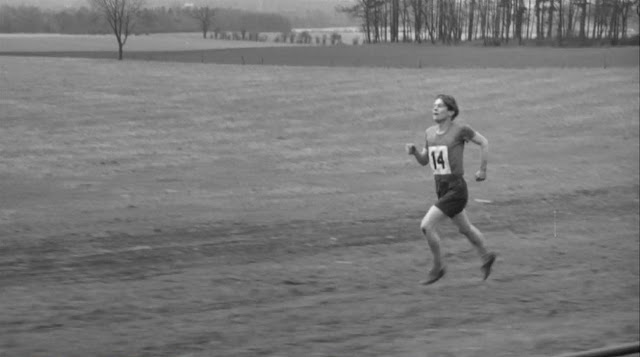 When the Governor admits a deep desire to have Colin win the race against the runners from the other school, it is slightly telegraphed as to what will happen. I don’t suppose it’s any fault of the filmmakers, but there is this innate sense that to have Colin win the race just wouldn’t be right. In the final 5 minutes of the film, we witness one of the greatest edited sequences in cinematic history. Memories and thoughts flood through Colin's head as he runs across the countryside. Back and forth, the moments flash in front of us as both exhaustion and the climactic moment spreads open before us: thoughts of his father, and past loves, of crimes and hatred and disappointment, of joys and hopes and running and clouds and grass and trees. However, the crowd’s pleas and the Governor’s astonished face are not enough to convince Colin to cross that finish line. It is a great finale to a great film, and one of cinema’s great “f*ck you” moments.
Posted by Jon at 7:00 PM

Email ThisBlogThis!Share to TwitterShare to FacebookShare to Pinterest
Labels: The Loneliness of the Long Distance Runner, Tony Richardson

"There’s also a longingly romantic quality that the film has about it, with shots of bleak, barren trees and puddles of water reflecting the gray sky, mist hanging about…….. there is a longing and a yearning threatening to break free from every frame, just as Colin feels the need to find escape into something."

Beautifully-written Jon, and a great review of a British masterwork. As you note with bravado the filming is superlative and Tom Courtenay is unforgettable. Though I do own the BFI Region 2 I was very happy to hear a Region 1 blu-ray is coming soon!

Thanks Sam as usual for your effusive praise. Nice to hear that a REgion 1 Bluray is coming!