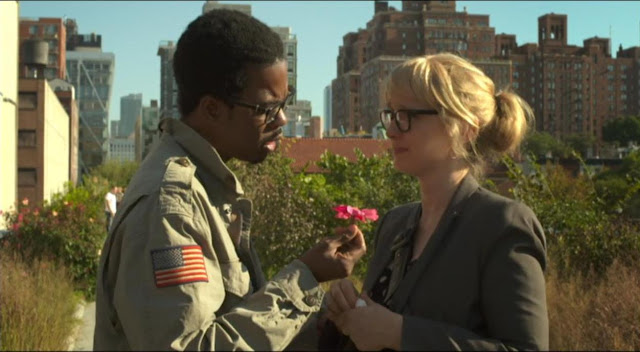 If I measured my favorite films of 2012 by how much fun I had watching them, this film would be very near the top. Julie Delpy’s somewhat-sequel to her 2 Days in Paris, is a frenetic and hilarious screwball romp. It also contains a great deal of truth hidden amongst the screwy exterior. I’ve been a fan of Julie Delpy going back about 15 years now and I must admit I find her on-screen persona to be utterly charming and really funny. I’m glad to see her succeeding in her new ventures. Here she not only acts, but writes and directs this wonderfully funny comedy, which is one of my favorite films of 2012. 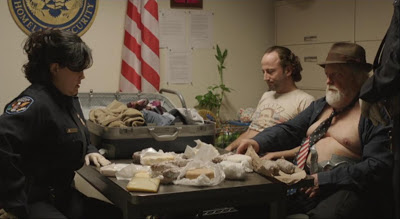 Delpy plays Marion, a divorced mother with a young son, who has recently begun living with her new boyfriend Mingus (Chris Rock), who is also divorced with a young daughter. She is a struggling artist and he is a writer and radio show host. Their relationship is still in the early stages of development, yet her family is coming to visit from France to stay with them: her fat and jolly father, her nympho sister, her sister’s boyfriend (who also happens to be Marion’s ex). Delpy’s film examines French-American culture clash, the transience of the modern family unit, and of course that thing we can nearly all relate to…..dysfunction. This film operates like screwball comedies from decades past, which were situational and character driven. I think of Bringing Up Baby (1938), or perhaps even more so, My Man Godfrey (1936). There is a frenetic pacing and absurd silliness to the shenanigans here. Yet it’s tempered by a bittersweet, self-deprecating style of humor. It’s not gross out, a la recent comedies like The Hangover (2009), or Bridesmaids (2011). It also doesn’t rely on those film’s penchant for gags with a long build-up. Delpy’s script is loaded with lots of witty, awkward exchanges that feel very personal and real. 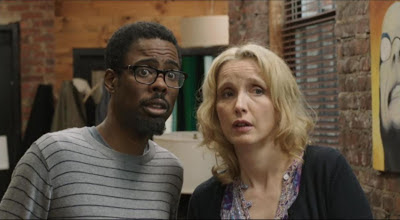 One of the most interesting and funny segments of the film occurs when Marion, as part of an art exhibit, sells her soul for a price to the highest bidder. This sequence is a terrific, mocking send-up of artist pretension, and is an example of Delpy’s sometimes morbid sense of humor. Marion’s father (played by Delpy’s real-life father) has many funny moments with Chris Rock, as neither of them can understand each other, and these scenes are played so underhandedly awkward. Rock plays his part effectively, understanding he doesn’t need to be the funny one in every scene. There is a really funny sequence though between he and Delpy in bed where they discuss a toothbrush that may or may not have been used inappropriately. Delpy is nearly effortless here, breezily portraying the prototypical screwball queen with panache. She has this way of raising her voice and becoming very agitated that I find REALLY funny. 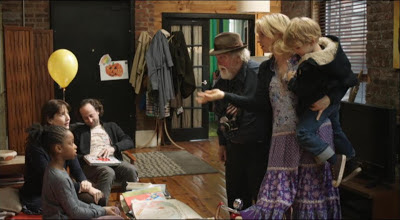 Delpy also does some nice things with the design of the film and the camera, incorporating fast motion, collage photographs, and a couple scenes involving puppets that does not come off pretentious at all. On the contrary it adds a lightness and whimsy to a film that was one big surprise for me. I was not nearly expecting to laugh as much as I did (I laughed the whole time), nor was I thinking it would be as effectively paced as it was, or filled with as much energy as it has. As I said, this film comes from a very long tradition of screwball type comedies. It can at times be really hard to quantify films like this. How do you value laughs or heart? This film has both in large quantities and was the funniest film of 2012 for me, and that's worth a lot.
Posted by Jon at 6:00 AM

Wow Jon. This is another one of those minority moments when we are on completely different wave lenghs. This year it happened with DJANGO UNCHAINED and OSLO, AUGUST 31ST, and to a lesser extent ARGO and SILVER LININGS, but arguably I'd say this different here with Julie Delpy's film is the most astounding. I flat out hated this film, found it self-righteous, irritating, episodic, scattered and ultimately unfunny, much like the director's earlier mumblecore 2 DAYS IN PARIS. The new film here may well have been the worst I saw at the Tribeca Film Festival, and for me Ms. Delp is as overrated as any contemporary director I know. The coss cultural humor never comes together, the focus is trite and uninteresting and the performances are annoying.

Do you think I may be qualified now to be elected President of the "I Hate 2 Days in New York" fan club, especially since I live within a stone's throw of the Big Apple? Ha!

As always I respect your position and know that taste comes largely into play here, and appreciate the great writing and insights, whether or not I have felt them myself. Great work here!

Yeah I'm aware I'm going to stand alone on this one and I do recall you hated this film. I found the film really funny, but I feel I sort of "get" Delpy for whatever that's worth. It's a film I love and I'll stick by it even though I know no one else will. Everything you mention on the film, I basically feel sort of the opposite. Ha. Funny. Yep we don't always see things the same and this one is another example. Thanks for the honest comments though Sam....not surprising as I already knew how you felt from earlier last year.

Actually Sam....I haven't heard much praise thrown Delpy's way at all....so it would seem to be hard to say she's overrated. I actually think 2 Days in Paris was just OK, but this one was hilarious.

Well Jon, there must have been something in our water growing up because I "get" Delpy too.

I want to watch it again but with Jordan this time.

I enjoy the less gag related comedies too, though Bridesmaids was probably one of the better in that genre.

Haha thanks Sis. You're right we both share a love of Delpy! Yay! I'm sure Jordan will like it.

I really liked this movie, even more than 2 Days in Paris. Big fan of Delpy's writing.