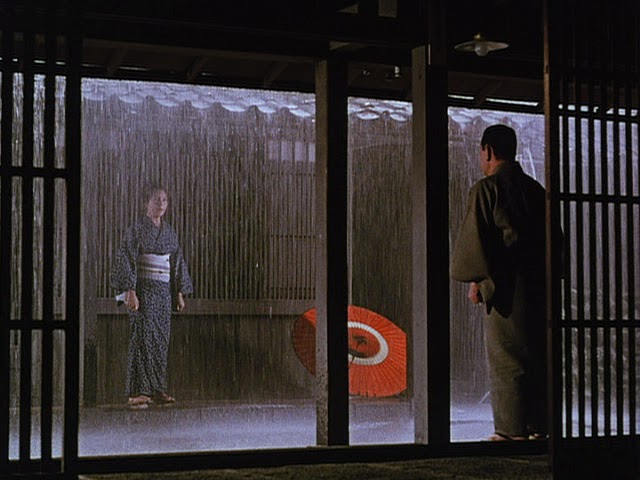 Ozu’s famed Floating Weeds, a remake of his A Story of Floating Weeds (1934) is a careful examination of past choices and present missteps. It is also one of Ozu’s more confrontational pieces in a career built upon quiet desperation and resignation. And yet, there are the ever-present joys of watching an Ozu film: the un-rushed narrative focus, the quiet/still scenes of empty rooms, the geometric interplay of the interior sets, the rich atmosphere and the underplayed acting from the entire cast which allows the determined resolve of the story to play out truthfully, without overstatement. 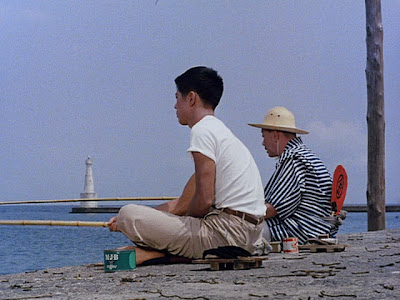 Floating Weeds concerns the story of a theatre troupe coming to a small coastal town. We find out that the lead actor and owner of the troupe, Komajuro (Ganjiro Nakamura) has a connection to this town and that he has come here to visit his son and former lover Oyoshi (Haruko Sugimura). However the young man, Kiyoshi, believes that Komajuro is his uncle as he has been told. When Kiyoshi was born, the man didn’t want the boy to know that his father was an itinerant actor, so the secret has always been kept and the boy was led to believe that his father died. Things go smoothly until an actress in the troupe named Sumiko (Machiko Kyo) gets suspicious of Komajuro's intentions in the town and begins to meddle in the delicate family lie that the man has created for himself. 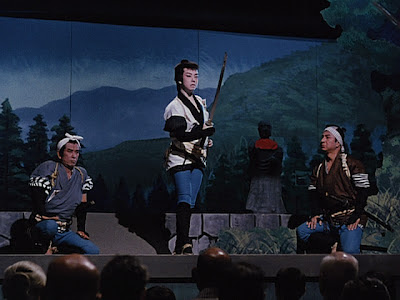 There is a particular scene in this film where the plot begins to thicken, tension begins to build, and we realize that conflict has come to Komajuro's carefully calculated life and everything is about to go wrong. There is a rain storm that comes and as it’s captured by the camera, there is a deep cleansing sensation afforded to the film. We are allowed to watch the rain. We see the rain through windows, and from different angles as it falls on flowers in the courtyard, as it falls into the street etc. There’s also a terrifically staged sequence where Komajuro and Sumiko are opposite the street from each other under the eaves of the house and rain dividing them both. It’s as if the rain has washed away the protective “cover” that the man has created for himself and has exposed his lie metaphorically. 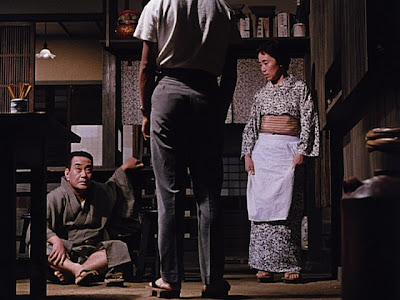 What I love best about this film is the way Ozu pulls you into the drama through the actors and the atmosphere. There tends to be a bit more confrontation, especially in the final 1/3 of the movie, than is usually commonplace in Ozu's films, where the conflict often plays out internally within the minds of the characters. Here, people grab one another, they strike each other, they twist each other’s arms. Additionally, the use of the summertime heat……people fanning themselves, the sound of the droning cicadas, the lazy summer afternoons at the beach, provide a thick atmosphere. Ozu’s use of the acting troupe also reflects a heightened state of dramatic effect, with the use of the costumes and the make-up providing a double-dose of cinematic drama. This is one of my favorite Ozu films and it’s fantastically written, shot, acted (particularly by Nakamura and Kyo), and directed. There is not a false step in this magnificent film.
Posted by Jon at 6:00 PM

Jon, I haven't seen this one yet, but I have to chime because I absolutely love the original. I think I chose it as my favorite film of 1934. I've kind of put off seeing this one, partly because I love the original so much, but your essay reminds me that I need to add this one to my Netflix queue.

Whoops, I don't know how this happened. Feel free to delete the redundant comments.

Hey Jason! Thanks for your thoughts, yes I can understand how you would put it off. I think this one is different enough from the original though, I mean the color cinematography is excellent as is the acting and it's a beautiful film however you spin it. I think you'll like it and may enjoy the compare and contrast.

Jon, this is a tremendous post on the director who must be the most difficult to write on I've ever encountered. Ozu's films are so subtle that they almost defy any attempt at analysis. Writing anything specific and concrete about something so abstract is a real challenge, yet you seem to have risen to it admirably. I especially like the opening where you describe the qualities of Ozu's style and how "Floating Weeds" reflects them. The parts about the use of the setting and the weather to establish mood also stood out to me. As you know, I'm a tremendous fan of Ozu, and this is my favorite Ozu film.

FLOATING WEEDS is pretty much the most physically beautiful of all Ozu's pictures. Kuzuo Miyagawa is one of the greatest of all cinematographers (RASHOMON, YOJIMBO, UGETSU, SANSHO THE BAILIFF) and he got that rare chance to work in color with a film that is a textbook example of exquisite lighting. The major difference between FLOATING WEEDS and the earlier film, is internal--the first film is more bitter, while the latter more resigned and philosophical. The earlier film chronicles deep despair (seen in Choko Ida's performances) which was never seen in Ozu's later work. Still, there is an autumnal sadness in FLOATING WEEDS, while A STORY OF FLOATING WEEDS has a stronger strain of comedy. In any case, you've again done a meticulous job in framing the film's narrative and artistry, and your writing is magnificent.

Hey R.D. Thanks for your comments. Yes it can be difficult to write about Ozu, I would agree and even if one did, it might tend to be similar from film to film even though there are those subtle differences between films. It's just hard to articulate I think. Thanks though and I can understand how this would be your favorite Ozu. Mine might be Late Spring, but it's a tough call.

Hey Sam, thanks for highlighting Miyagawa's work here and it is exquisite indeed. I would probably agree that this is the Ozu's most beautifully shot film. I do like the second Floating Weeds above the first one, but there are others who think differently for sure. Your knowledge is certainly abounding here and I can tell you have a deep admiration for Ozu, like many of us.

You've made me consider the author Kawabata in relation to Ozu and I may put a post together soon.

Hey Toby! Welcome back! It's been quite some time. I'm hoping you come back to blogging as you are quite good at it. Thanks for your comment.

Hey Jon, thanks for the kind words. Yeah I'm back in a casual kind of way. Although with the quality content about I'm fighting the urge to spend hours reading everyone's blogs already.