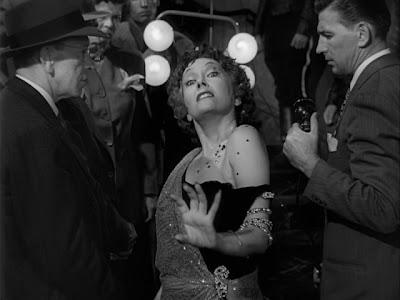 Some films never grow tiresome no matter how many times I watch them. Sunset Boulevard belongs in that category for me. Arguably Billy Wilder’s best film, it contains one of the all-time greatest scripts and all-time greatest performances. The film’s long shadow also echoes throughout the last 60 years, finding parallels in the bizarrely moving documentary Grey Gardens (1975) or even more closely in Lynch’s Mulholland Dr. (2001), which not only shares the similarity of having a Hollywood street name for its title, but also shares the penchant for debunking the Hollywood dream. Sunset Blvd. is also filled with the kinds of nuggets and goodies that film buffs love to dissect. 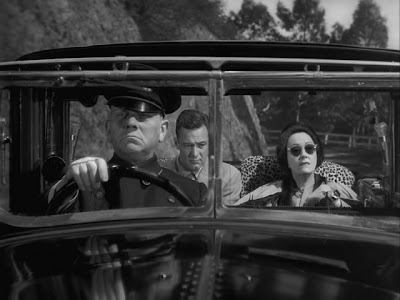 ﻿
Billy Wilder’s film concerns the story of Joe Gillis (William Holden), who after being murdered, narrates his past story from beyond the grave, as a struggling Hollywood screenwriter strapped for cash and about to lose his vehicle and apartment due to lack of funds. While trying to flee the cops one day, his tire blows out and he quickly swerves into a driveway and pulls into a rather empty garage next to a dilapidated mansion. Through mistaken identity, he is invited inside by the owner, thinking he’s a mortician come to care for a deceased family pet.  The owner of the house turns out to be Norma Desmond (Gloria Swanson), a has-been silent film star, out of work for twenty years and living in a crumbling “Zanadu” with her butler, Max (Erich von Stroheim). When she presents her work of love to Joe, a self-written script, Norma convinces him to help her edit it to become her comeback film, which she thinks will reunite her with director Cecile B. DeMille. Joe stays at the house to work on it because he needs the cash, but slowly begins to realize he’s getting in deeper than he anticipated, as Norma quickly develops a possessive attachment to him. 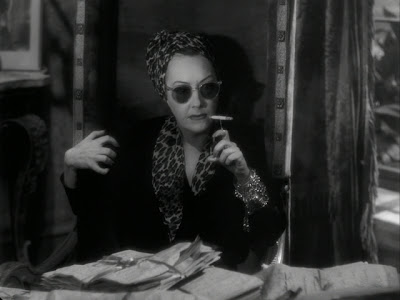 ﻿
Wilder examines in the most thorough way, the tragedy of the befallen and aged star. It is probably the greatest examination, in fact, of the underbelly of . The script contains such acerbically funny dialogue and voiceover poetry that you can’t help but become wrapped up in the deliciously macabre humor. Several lines in the film are absolutely brilliant: “Talked to a couple of yes men. To me they said no.” “I AM big. It’s the pictures that got small”. Of course the iconic “Alright Mr. DeMille. I’m ready for my close-up.” However, the genius, as I see it, is that Wilder makes you laugh initially, but makes you feel like a heel for it later, as you realize the desperately sad tragedy unfolding before you. Unless you’re completely clueless, you know that Gloria Swanson was an immense silent film star in her day. I’ve seen her in Queen Kelly (1929) (directed by von Stroheim and a clip of which appears in Sunset Blvd.) and Sadie Thompson (1928). Wilder’s script is loaded with the kinds of biographical information and connections between Swanson and von Stroheim, incorporating other major figures like Buster Keaton in a cameo, and of course Paramount Studios, the studio that made Swanson a star in the 1920’s. Furthermore, Norma’s scene where she plays Chaplin’s The Tramp is enhanced by the fact that Swanson’s first film role was in Chaplin’s His New Job (1915). 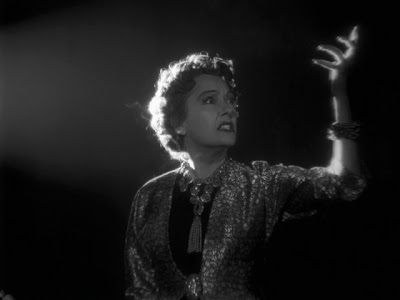 ﻿
One of the peculiar things about the script though, and I’m not saying it’s a flaw per se, is the motivation of Joe Gillis. He of course needs money. But there’s a point when he leaves Norma in a state of desperation to attend a party. She slits her wrists that night, and when Joe finds out, he comes rushing back to her. Why? Does he truly care for her? Does he feel guilty? We see Norma lying on her bed, crying, bandages on her wrists and Joe comes to her side and allows himself to be kissed by her. Out of pity? I also wonder whether sex is involved in the relationship, even though at the time stayed far from such topics, however at one point Norma makes reference to “Men of his sort.” It seems apparent to me though that there is a sexual undercurrent to the proceedings. Another scene regarding Joe’s questionable motivation is when his girlfriend Betty comes to the mansion to find him and he turns her away. Does he want to save Norma’s fragile psyche? Does he love Norma? If so, why does he quickly betray Norma as well? 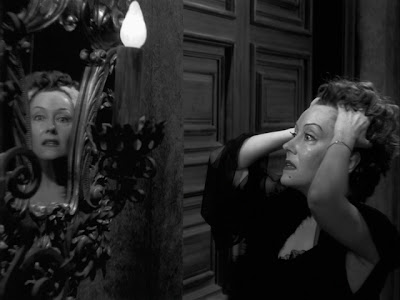 ﻿
I’m absolutely convinced, though, that Swanson gives one of the absolute greatest performances you will ever see. It had to have been so brave of her to attempt this role, which really doesn’t paint her in the nicest of lights. She’s maniacal, paranoid, self-absorbed, suicidal etc. Her bravery as a has-been playing a has-been is evident in the moments when she’s trying to get her skin and face in shape by having facial treatments done to her. The visage of her with patches on her face, and a strap for her lower chin makes me respect her so thoroughly for this performance. This role requires a commanding, terrifying, and mysterious presence, which she brings in spades. Her portrayal gets to the heart of the psychological impact of what fame can do to a person. In the final moments after the infamous murder has been committed, the suspense of her slow walk down her staircase with reporters and cops everywhere standing still while she thinks she is being filmed for a movie is such a brilliant set-piece, and in fact far outweighs the suspense of the fateful murder scene just before it. It’s one of the great endings in all of cinema and a capstone to one of the greatest films of all time.
Posted by Jon at 7:00 PM

There is a single shot I remember,that is when they are shooting a picture on the studio set,a microphone hit Gloria Swanson's head,which means her silent golden age has been smashed by sound.Wilder is the best story teller Hollywood ever had,no doubt about it.

Yeah David that's such a great symbolic moment in a film containing so many great moments. Yeah Wilder definitely stakes a claim in that regard. Brilliant stories he crafted. Thanks for the comment!

Personally I always feel that Wilder is overrated. I need to see a couple of his most acclaimed still (The Apartment and Ace in the Hole) but none of the rest of his stuff really makes me think "masterpiece." Witness for the Prosecution is really fun, and Double Indemnity is good, but I really can't get behind Some Like it Hot.

But this one is great. Here, at least, I agree with the consensus: one of the finest Hollywood films of its era. Gloria Swanson is amazing. And all the little Hollywood in-jokes are heartbreaking, particularly Buster Keaton's silent card-playing cameo. Good review!

And he's surely one of the greatest of all American directors.

Yes, John, the film does indeed contain one of the all-time greatest scripts and all-time greatest performances. (Gloria Swanson) I said so much about this film at other threads over the past years that I feel I have petered out. But what a wonderful review and summary assessment of one of the greatest of all films, and one as corrosive and cynical as any other. But that's part of it's delicious appeal and endless fascination.

Also THE APARTMENT belongs in the masterpiece category. Only SOME LIKE IT HOT never worked for me, though obviously it does for everyone else.

@ Stephen- Well at least we agree on this one! I think Wilder made at least several masterpieces and these are undisputed for me as:

Double Indemnity
Sunset Blvd.
Some Like it Hot
The Apartment

However several others are brilliant, and Sam highlighted Ace in the Hole and The Lost Weekend that are a bit uneven in my opinion but very good. However, his most underrated work in my opinion, is the rapid fire satire, One Two Three with James Cagney absolutely unbelievable.

@ Sam- Yeah I'm sure you've talked at length about this one before. It definitely is one that to get mentioned alot and for good reason. I'm surprised you don't like Some Like It Hot? Usually considered one of the greatest comedies of all time. Wondering how it will place on the countdown over at WITD?

The motivation of Joe Gillis, why doesn´t he just walk the door with Betty?
I.m.O: Self-pitying and self-loathing. While G.Swansons N.Desmond shows what fame and success can to to to a person, this shows the results of lack of that. And Wilder always let you realize what a writer he could have been, see how the sparks fly between him and Betty. So he, a professional writer, ends up swallowed by a story written by an amateur, no Salome without a John the Baptist.
Thanks a lot for such a well-written and -researched review, considering how famous SB is and how much has already been said it can´t be easy to find one´s own point of view.You did.
Maren

Wow thanks Maren for your great comment. I would have to agree with you. Gillis' self loathing is quite apparent by the end. He's completely disgusted by himself and the whole set-up. Fabulous comment.

Stephen, try watching the top tier stuff from just his first dozen years in a week...

What I love about Wilder is the fusion between brilliantly wrought screenplays with some of the best dialogue and storytelling of the century, with the Classical Hollywood style favoured by Ford, Wyler, Hawks, et al. But Wilder always has visual flourishes throughout his films, his own personal signiture; the graphic close-up of the open eye and Birnam's fall down the stairs, the pool scene in Sunset, Norma's triumph finger-pointing whilst watching 'Queen Keely', Kirk Douglas' death fall, Charles Laughton's reflective glasses, ext, ext. Always telling the story visually.

Bobby J. it sounds like you have a great depth of knowledge on Wilder. I love your comment. Yes there is a distinctive flair for Wilder, certainly the emphasis on dialogue, but also a subversive play in other aspects including visuals that tend toward the striking moments.

One of my favorite films!