Before Sunset (2004) - Directed by Richard Linklater 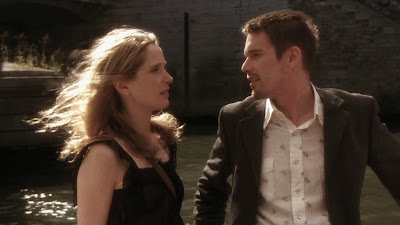 (This review contains spoilers)
In Before Sunset, Linklater’s follow-up to his romantic masterpiece Before Sunrise (1995), we pick up Jesse (Ethan Hawke) and Celine (Julie Delpy) 10 years after they initially met on a train in . Their epic day spent in talking, ruminating about life and falling in love, ended with our two lovers departing and making plans to meet up 6 months later on the train platform where they parted ways in . Of course, they leave without exchanging phone numbers or any contact information, which leaves the viewer very skeptical that they would ever meet again. In Before Sunset, we learn not just what happened 6 months later, but also what else has transpired in their lives since then. Not only is Before a brilliant and essential follow-up to the first film, in some ways, it’s better. 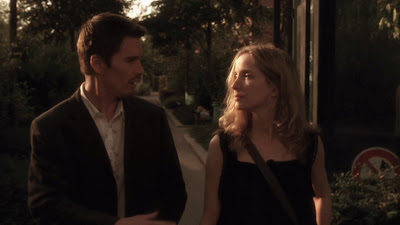 At the beginning of Before Sunset, we meet Jesse at a bookstore where he is signing copies of his book in a Parisian bookstore. His book, apparently somewhat popular, is the “fictional” account of his day and night with Celine, which occurred roughly 10 years before. Celine happens to be in the bookstore, eyeing Jesse from the stacks of books. They make eye contact and Jesse drops what he’s doing and goes over to see her. They meet awkwardly, slowly begin conversation, and decide to go walk around while talking, before Jesse has to catch an evening plane from to his next stop. We understand immediately that Celine and Jesse never met up 6 months after their initial day together. In fact, this point is discussed early on in the film, clearing up some mystery as to why they didn’t get together. Jesse had made it back to , but Celine missed the date because her Grandmother died right beforehand, with the funeral occurring on that fateful Dec. 16, thus eliminating any chance of them meeting up again, until now. They spend the rest of the film, as in the first, talking about their lives. 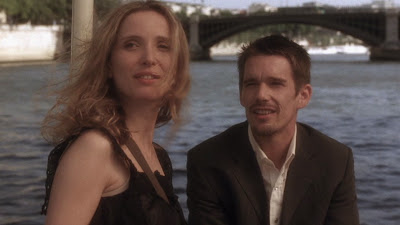 If there’s one part of the film that doesn’t quite work well, it’s actually the opening moments of the film where Celine and Jesse meet. It feels a bit forced and awkward in that bookstore. Once they get out on the streets, the film takes off and the chemistry so electric in the first film, comes into focus again. When comparing the films, it is obvious that Before Sunrise is easily the most traditional of the two, including proceedings more entertaining for standard audiences. What the first film leans on are the encounters with various passers by: the actors, the palm reader, the poet-bum. These encounters pace the film and break up the “monotony” of having two people talk the whole time. In Before Sunset, side characters are eliminated. It is essentially Celine and Jesse, alone for 75 minutes in one long conversation. Thus, cinematically, it’s more risky, and also therefore less romantic in the traditional sense. I feel that this approach is probably closer to what Linklater was trying to get at in the first film, but, Linkater succeeds here in that he’s able to convey the ephemeral time together better. This film nearly occurs in real time, providing us essentially with the lone 70-90 minutes that they have to catch up. In this way, he infuses the film with a fleeting realism. This realism is also apparent in the progression of the discussions which go from polite introductions and jokes, to talk of careers, to the heated discussions of what happened “that day” and why their love lives have never compared with that ever since. This progression toward the more serious reflects our natural tendencies to get to know someone or open up with less important topics and gradually dig deeper. 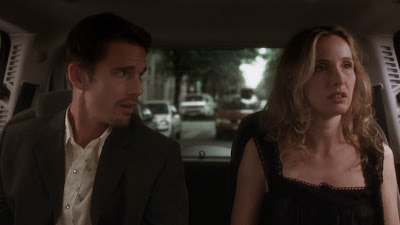 If the first film was all about “What could life be like?”, then the second film is about “What could life have been like if...?”. This perspective is especially apparent from Jesse and Celine as they talk on the boat tour on the and then continue a heated discussion in a car ride:
Jesse- Why weren’t you there in ?
Celine- I told you why.
Jesse- Well I know why…I just….I wish you would have been. Our lives might have been so much different.
Celine- You think so?
Jesse- I actually do.
My favorite quote in the film is this one:
Celine- I guess when you’re young, you just believe there will be many people with whom you connect with......Later in life you realize it happens only a few times.
Finally the film comes to its most pointed moment here:
Celine- I was fine….until I read your f****ing book. It stirred shit up, you know? It reminded me how genuinely romantic I was and how I had so much hope in things, now it’s like I don’t believe in anything that relates to love. I don’t feel things for people anymore. In a way I put all my romanticism into that one night and I was never able to feel all this again. Like somehow this night took things away from me…..
All these quotes seem so very true, not just for these characters, but great observations about life. There is definitely a regret in the tone of the film, to not just being young and stupid as they say, but to a remorse for what happened to their lives over the last 10 years following their decisions. They are only in their early 30’s, and yet there’s the sense that things are too late for them, as if the decisions made between ages 20-30 set you up for the rest of your life. Missing that window has caused great heartache for both people. I applaud the skepticism and pessimism in this film, as it’s a sobering flipside to the romantic optimism of the first film. Taken together, both films make up one of the essential cinematic relationships.
Posted by Jon at 6:00 AM